The BMJ ran a great obituary of Gladys, which makes her sound like a true force of nature: 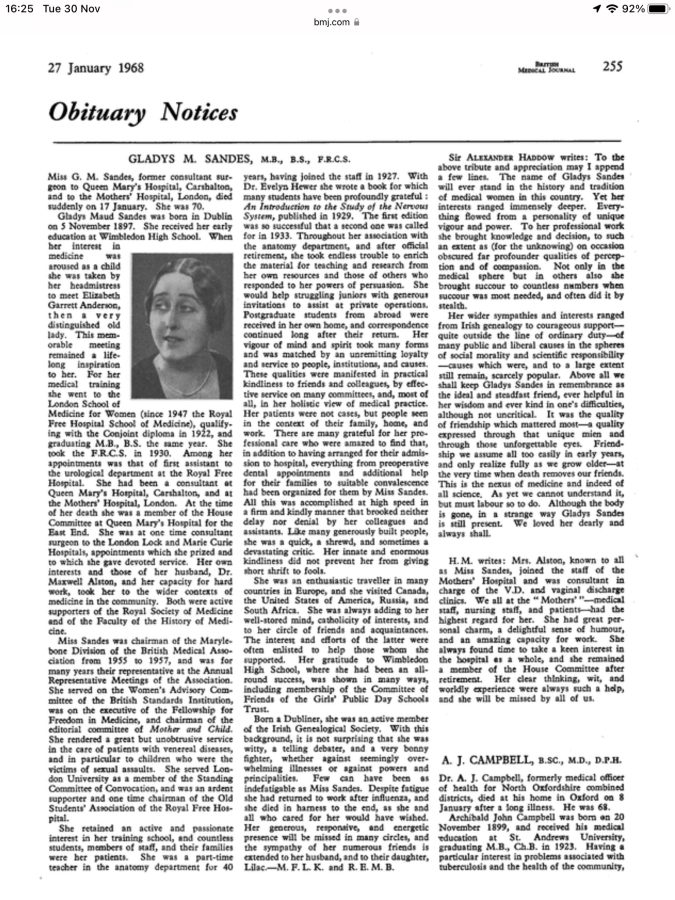 Gladys Maud Sandes was born in Dublin on 5 November 1897. She received her early education at Wimbledon High School. When her interest in medicine was aroused as a child she was taken by her headmistress to meet Elizabeth Garrett Anderson, then a very distinguished old lady. This memorable meeting remained a life-long inspiration to her. For her medical training she went to the London School of Medicine for Women (since 1947 the Royal Free Hospital School of Medicine), qualifying with the Conjoint diploma in 1922, and graduating MB., B.S. the same year. She look the F.R.C.S. in 1930. Among her appointments was that of first assistant to the urological department at the Royal Free Hospital. She had been a consultant at Queen Mary's Hospital, Carshalton, and at the Mothers' Hospital, London. At the time of her death she was a member of the House Committee at Queen Mary's Hospital for the East End. She was at one time consultant surgeon to the London Lock and Marie Curie Hospitals, appointments which she prized and to which she gave devoted service. Her own interests and those of her husband, Dr. Maxwell Alston, and her capacity for hard work, took her to the wider contexts of medicine in the community. Both were active supporters of the Royal Society of Medicine and of the Faculty of the History of Medicine.

Miss Sandes was chairman of the Marylebone Division of the British Medical Association from 1955 to 1957, and was for many years their representative at the Annual Representative Meetings of the Association. She served on the Women's Advisory Committee of the British Standards Institution, was on the executive of the Fellowship for Freedom in Medicine, and chairman of the editorial committee of Mother and Child. She rendered a great but unobtrusive service in the area of patients with venereal diseases, and in particular to children who were the victims of sexual assaults. She served London University as a member of the Standing Committee of Convocation, and was an ardent supporter and one time chairman of the Old Students' Association of the Royal Free Hospital.

She retained an active and passionate interest in her training school, and countless students, member of staff, and their families were her patients. She was a part-time teacher in the anatomy department for 40 years, having joined the staff in 1927. With Dr. Evelyn Hewer she wrote a book for which many students have been profoundly grateful : An Introduction to the Study of the Nervous System, published in 1929. The first edition was so successful that a second one was called for in 1933. Throughout her association with the anatomy department, and after official retirement, she took endless trouble to enrich the material for teaching and research from her own resources and those of others who responded to her powers of persuasion. She would help struggling juniors with generous invitations to assist at private operations. Postgraduate students from abroad were received in her own home, and correspondence continued long after their return. Her vigour of mind and spirit took many forms and wss matched by an unremitting loyalty and service to people, institutions, and causes. These qualities were manifested in practical kindliness to friends and colleagues, by effective service on many committees, and, most of all, in her holistic view of medical practice. Her patients were not cases, but people seen in the content of their family, home, and work. There are many grateful for her professional care who were amazed to find that, in addition to having arranged for their admission to hospital, everything from preoperative dental appointments and additional help for their families to suitable convalescence had been organised for them by Miss Sandes. All this was accomplished at high speed in a firm and kindly manner that brooked neither delay not denial by her colleagues and assistants. Like many generously built people, she was a quick, a shrewd, and sometimes a devastating critic. Her innate and enormous kindliness did not prevent her from giving short shrift to fools.

She was an enthusiastic traveller in many countries in Europe, and she visited Canada, the United Slates of America, Russia, and South Africa. She was always adding to her well-stored mind, catholicity of interests, and to her circle of friends and acquaintances. The interest and efforts of the latter were often enlisted to help those whom she supported. Her gratitude to Wimbledon High School, where she had been an all-round success, was shown in many ways, including membership of the Committee of Friends of the Girls' Public Day Schools Trust.

Born a Dubliner, she was an active member of the Irish Genealogical Society, With this background, it is not surprising that she was witty, a telling debater, and a very bonny fighter, whether against seemingly over-whelming illnesses or against powers and principalities. Few can have been as indefatigable as Miss Sondes. Despite fatigue she had returned to work after influenza, and she died in harness to the end, as she and all who cared for her would have wished. Her generous, responsive, and energetic presence will be missed in many circles, and the sympathy of her numerous friend. is extended to her husband, and to their daughter, Lilac.—M. F. L. K. and R. E. M. B.

Sir Alexander HADDOW writes: To the above tribute and appreciation may I append a few lines. The name of Gladys Sondes will ever stand in the history and tradition of medical women in this country. Yet her interests ranged immensely deeper. Everything flowed from a personality of unique vigour and power. To her professional work she brought knowledge and decision, to such an extent as (for the unknowing) on occasion obscured far profounder qualities of perception and of compassion. Not only in the medical sphere but in others also she brought succour to countless numbers when succour was most needed, and often did it by stealth.

Her wider sympathies and intermits ranged from Irish genealogy to courageous support—quite outside the line of ordinary duty—of many public and liberal causes in the spheres of social morality and scientific responsibility —causes which seem, and to a large extent still remain, scarcely popular. Above all we shall keep Gladys Sondes in remembrance as the ideal and steadfast friend, ever helpful in her wisdom and ever kind in one's difficulties, although not uncritical. It was the quality of friendship which mattered most—a quality expressed through that unique mien and through those unforgettable eyes. Friendship we assume all too easily in early years and only realize fully as we grow older—at the very time when death removes our friends. This is the nexus of medicine and indeed of all science. As yet we cannot understand it, but must labour so to do. Although the body is gone, in a strange way Gladys Sondes is still present. We loved her dearly and always shall.

N.M. writes: Mrs. Alston, known to all as Miss Sondes, joined the staff of the Mothers' Hospital and was consultant in charge of the V.D. and vaginal discharge clinics. We all at the "Mothers' "—medical staff, nursing staff, and patients—had the highest regard for her. She had great personal charm, a delightful sense of humour, and an amazing capacity for work. She always found time to take a keen interest is the hospital as a whole, and she remained a member of the House Committee after retirement. Her clear thinking, wit, and worldly experience were always such a help, and she will be missed by all of us.

I hope it will be some time before it happens to me, but it would be nice to be the subject of such fulsome tributes from one’s colleagues!

Not mentioned here, but discussed in her Wikipedia article: the London Lock Hospital, to which she devoted her early career, was the first London specialist hospital devoted to sexually transmitted diseases. It was closed as part of the process of introducing the NHS, because it was believed that antibiotics would eradicate all STDs in the short term, so specialist hospital treatment would no longer be needed. Marginalised women, of course, were the big losers of this policy decision.

Gladys and her husband had one child, a daughter born when Gladys was 44. She was a cover girl for Country Life in 1963: 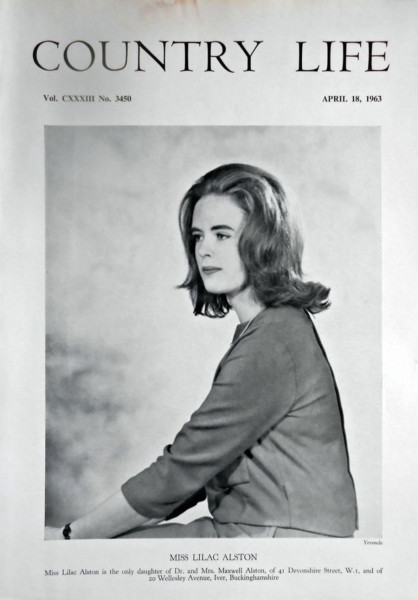 As far as I can tell, she is still alive and has two living children; her husband died exactly a year ago today, after 49 years of marriage. I have no contact with them, but hope this post will comfort and amuse them if they come across it.

Edited to add: Fellow Balkanologists will be interested to know that Gladys was also the fourth cousin of Flora Sandes, the famous Englishwoman who joined the Serbian army in WWI, both 3x great-granddaughters of John Sandes of Kerry (1640-1733) and his wife Mary Blennerhassett. They probably did not know each other well - Flora was more than twenty years older, they were not closely related and they never lived near each other. But given Gladys’ interest in genealogy, she must at least have been well aware of the connection.
Tags: genealogy
Subscribe