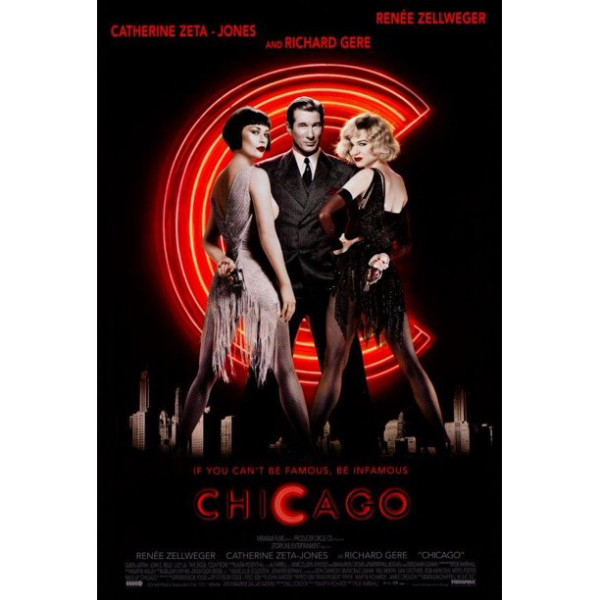 The other four Oscar nominees were The Lord of the Rings: The Two Towers, which I have of course seen, and Gangs of New York, The Hours and The Pianist, which I haven't. This was a year when I was settling into a new job and preparing for our third child’s arrival; the only other 2002 films I have seen are Harry Potter and the Chamber of Secrets, Minority Report, Die Another Day, Men in Black II, Austin Powers in Goldmember and Scooby Doo. Naming no names, I know someone who watched Scooby Doo in late pregnancy and laughed so much that she went into labour. I think they are all entertaining enough but none stands out for me. IMDB users rank Chicago 25th on one ranking and 28th on the other, behind most films mentioned above. Here's a trailer.
Slightly surprisingly, none of the cast had been in previous Oscar-winning or Hugo/Nebula-winning films, or (less surprisingly) in Doctor Who.

It is a story about murderesses awaiting trial in 1920s Chicago. In some ways it is a blast from the past. Four of the eight winners from 1961 to 1968 were musicals; this is the first one since then. Seven of the eight from 1967 to 1974 were about crime and law enforcement; the only other one since then was The Silence of the Lambs.

I have a bad case of COVID, so I’m not going to go into my usual depth. I did enjoy Chicago. However the erotic and sexualised dancing was somewhat lost on me last week; I think my libido has not been lower since I hit puberty. I was really struck at how well the old classics All That Jazz and Razzle-Dazzle were integrated into the script, and then discovered that both songs actually originated with the 1975 stage show of Chicago. They must have penetrated popular culture really quickly; I am sure I remember Morecambe and Wise doing a routine to at least one of them, which must have been very soon after. The West End show ran from 1979 to 1980.
The other song that really made me sit up was the Cell Block Tango:
Renee Zellweger as the main character gets only one really good song, with Catherine Zeta-Jones:Also shoutout to Queen Latifa, Lucy Liu and John C. Reilly for their roles.

Sure, Toronto doesn't look much like Chicago, and one may object that in real life, no woman was executed by the state of Illinois between 1845 and 1962. But that's beside the point. The film is not at all subtle in calling out the celebrification of criminals and the flaws of a justice system driven by showmanship. Watching it in the week of the Kyle Rittenhouse verdict, I felt the point just as relevant today as in 2002, or when the musical came out in 1975, or when the original play was written in 1926.

I'm putting it about a third of the way down my ranking, just below that other Chicago-set film, The Sting, and ahead of The English Patient.

Next up is the only film to win Oscar, Hugo and Nebula. (But first, The Two Towers.)