A long weekend in Paris

It's F's 22nd birthday today - Happy Birthday! - and as an early treat we went to Paris last weekend. I go to Paris now and then for work - a bit less so at the moment obviously - but I realised that possibly the last time I stayed overnight as a tourist was on an inter-rail with Anne in 1992, the year before we got married. We have all changed a bit since then. It was also the first nights outside Belgium for me and F since our trip to Burgundy and Switzerland this time last year. F had not been outside Belgium since, though I had briefly been in France twice, once to find my great-uncle's grave and once for a haircut. I can't remember a previous time in my life when I spent seven month without crossing an international border, let alone a year without an international overnight; even when I was a small child there were regular visits to relatives in Dublin.

The formalities of entering France were fairly straightforward. I had my second vaccination several weeks ago, so just needed to wave my certificate at the French police as we got off the train in Paris. F gets his second vaccination tomorrow; he therefore had to get a test a couple of days before we left, which he also then waved at the French police who gave it cursory examination along with our IDs. On our return, we detected no checks at all in Brussels.

We booked an AirBnB for €105 per night right beside the Pompidou Centre - a brilliant location. Our travels were a bit hampered by the fact that I wrenched a muscle in my leg a couple of weeks ago, and it's been pretty painful in the mornings until it warms up. On that basis I booked a taxi via Thalys on our arrival, which turned out to be a needless extravagance; twice the price of the taxis on the street, and more difficult to locate. Mostly I was able to manage public transport anyway.

We ate at the following places:

Worth making a general point that thanks to the pandemic, a lot of restaurants have closed, and neither TripAdvisor nor Google Maps is fully up to date with recent changes. So don't set your hopes on that fantastic-looking seafood place around the corner.

Friday: as noted above, arrived without incident in the evening, had our only French dinner of the trip (we ate Asian the other three nights) and retired, having ensured that Notre Dame is still there.
Every time we approached the apartment from the south, we encountered this gentleman, a creation of the exiled Syrian artist Khaled Dawwa, with the title Standing: The King of Holes, courtesy of Le Socle. 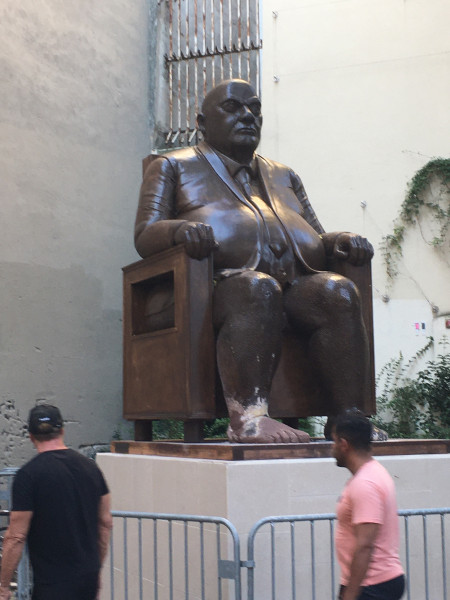 Saturday: As previously noted, we started with the superb exhibition about Napoleon.From there I took F on a quick pilgrimage to Shakespeare and Company, which is just the same as ever, if not more so.

On a whim we then went across the river to the Crypt of Notre Dame, whose exhibition is not all that big - bulked out a bit by some reflections on Victor Hugo - but has a stunning extra element: for €3 more, you can experience Ubisoft's 3-D virtual reality recreation of Notre Dame, which itself is of course closed to visitors right now. I must say I thought it was fantastic. Here's the 2-D version of the video.
I had been inspired to come to Paris in the first place by a recent Doctor Who play, starring Peter Davison and David Tennant, with a convoluted plot involving Cybermen in the Paris Catacombs. So inevitably we had to visit the Catacombs as well. Unlike Rome, these are purely nineteenth-century constructions, a huge artistically created subterranean ossuary of skeletons exhumed from former city centre graveyards. I had visited as a teenager, and my memory was that it was slightly more interesting then. I have a vague memory that they used to show off Danton's skull, or was it Robespierre's? Anyway, no celebrities this time, just the ranks of centuries of dead Parisians. 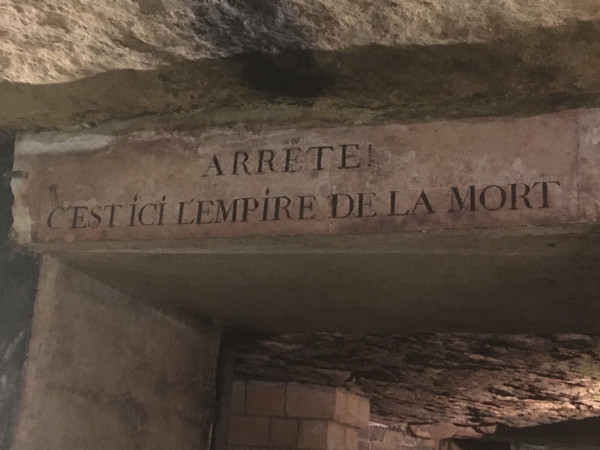 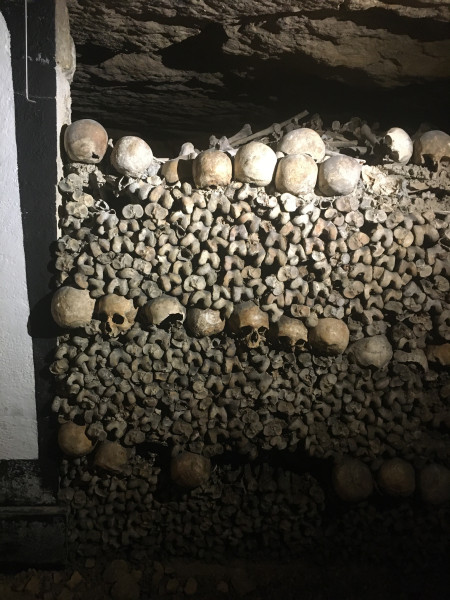 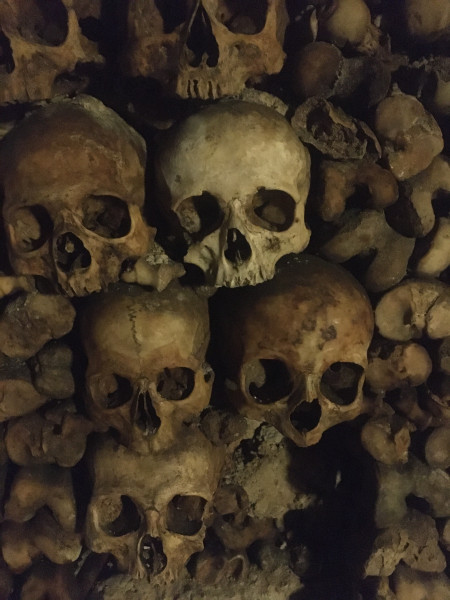 And we met with my friend A, who took us to a favourite Vietnamese place of hers in the 13th. The Asian Quarter greets you with a lovely sculpture which resolves into the Chinese character 門 (mén), meaning "gate", as you align yourself with it.
After dinner, A accompanied us as far as the Pompidou Centre before going home, and the only decent picture I have of the Centre is the three of us stading in front of it in the last of the evening sun. 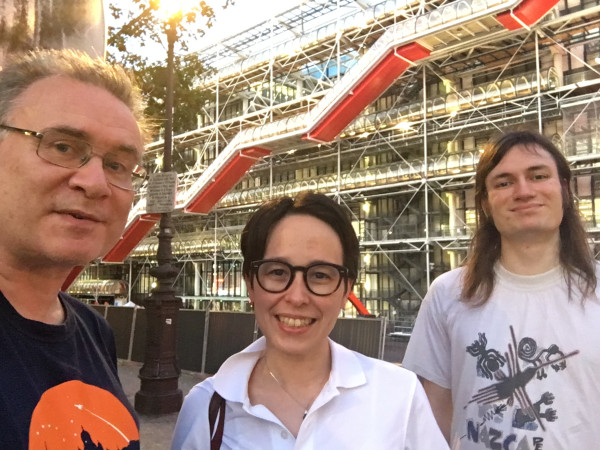 Sunday: We started with the Pompidou Centre, just outside our front door, and had a good look at the current exhibition of women abstract artists. There were some names there I knew, including videos - gosh, Barbara Hepworth's accent was pretty posh!!!! It was worth the price of admission alone to see Tremor, by Bridget Riley. (She turned 90 earlier this year.) 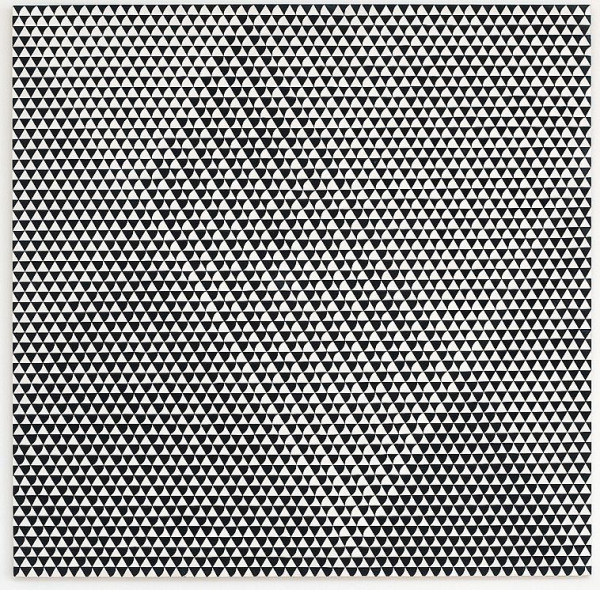 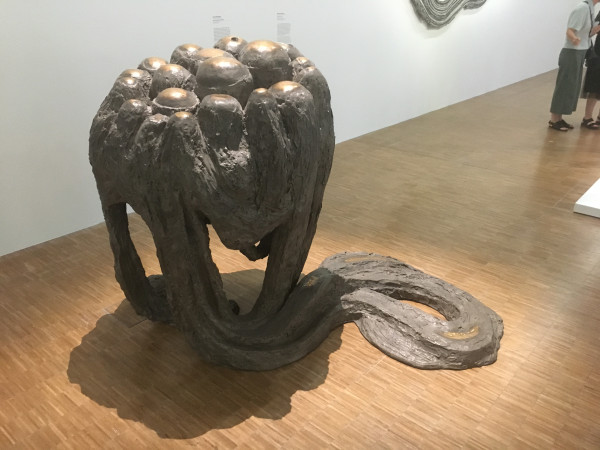 The thing I really want to follow up on is the 1924 Soviet science fiction film Aelita, Queen of Mars, for which costume designer Alexandra Exter established a lot of the science fiction aesthetic that we now take for granted.

But we spent most of Sunday out at Saint-Germain-en-Laye, where my friend E had suggested we could watch the Tour de France as it started its final day. Saint-Germain-en-Laye is nalso where the exiled James II and VII spent his final days. I thought we could spent some time looking for his memorial in the church, but in fact it's just on the right as you go in.
And you can choose between two different versions of history, neither necessarily complete.
Famous public figures can be seen in the vanguard of the Tour. 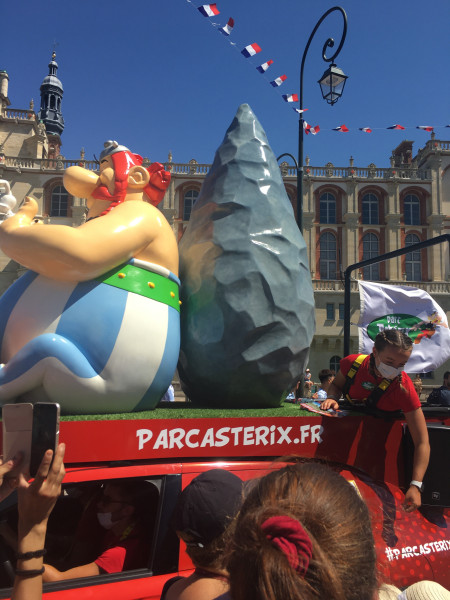 Also, dodgy merchandise can be bought by the gullible. 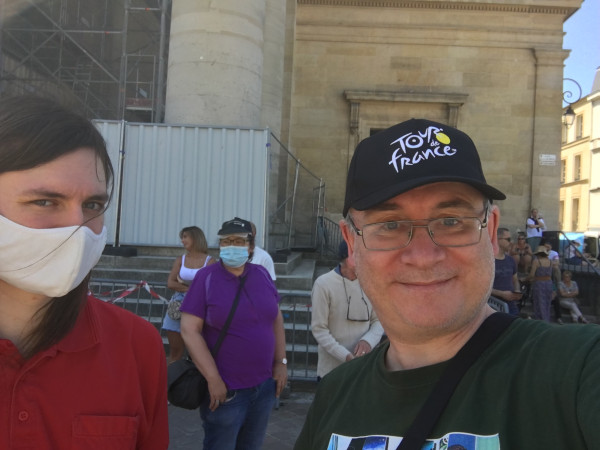 Eventually the Tour de France itself came past, and I wondered what the exiled Jacobites in the castle 300 years ago would have thought of it all.

E and her (slightly rebellious) sons treated us to ice cream and a nice but hot walk in the park, in the course of which both F and I caught the sun a bit. 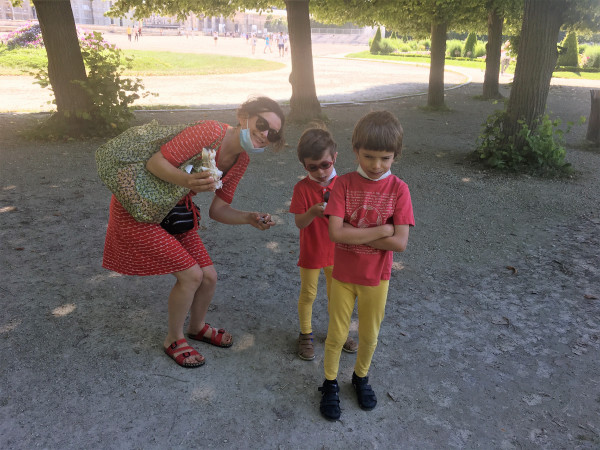 That took us to early evening, and a relatively early night.

On Monday, we started with a lightning quick visit to the Louvre, where my leg was playing up again so I didn't really have energy (or time) to give it the full whack. However, there is plenty to see in the Denon wing, and I'll save the other two for another time. This extraordinary candlestick was beaten out of a single sheet of metal in Khorasan in the late 12th century. Of course, the classics are classics for a reason.
Our last selfie of the trip had us posing with a Dacian barbarian prisoner. From the Louvre we headed up to eat lunch with colleagues near L'Étoile, and then walked a long hot walk across the river, my leg now much better, past the Quai d'Orsay and through the Invalides where the security checkpoint has one of the more creative approaches to Russian transliteration (and indeed basic German vocabulary) that I have seen:
Our last actual conversation was with a friend at the EU Institute for Strategic Studies, which I used to visit often in my thinktank days. I'm no longer in that world to the same extent, but it was interesting to learn how it had developed since the last time I was there.

Finally we visited the taxidermist Deyrolle. This place is just extraordinary. And a little creepy. You can't take pictures but here's a video.

Our quick Japanese meal before going had to be even quicker when I realised that our train's departure time was 19:24 and not 19:42, but we made it, despite me hobbling on and off the Metro, with about 90 seconds to spare. As F cheerfully said, there was another train later if we missed that one; but we didn't.

So, a great few days and a great break from routine. Hopefully travel will start becoming a thing again.
Tags: world: france
Subscribe