Riding the Unicorn, by Paul Kearney

It's too soon, sire. You do not have enough influence over his will. There is no telling what may happen. The melding is still in its early stages.

I've previously read Kearney's first two novels, The Way to Babylon and A Different Kingdom, both of which involve liminal adventures of a chap in our world who finds himself also playing a vital and heroic role in a fantasy world; but is it real? Riding the Unicorn has much the same premise, but some differences; the protagonist is an older ex-army prison guard, who is somehow chosen for a vital political assassination on the other side. It did not come together as well as the first two, I felt; it's brave to make the central character less attractive, but it also makes him less interesting, and I wasn't actually convinced by the need for the fantasy world to choose him for the mission. And there's no actual unicorn, except in an opening quotation about schizophrenia. But it's not too long. I see it's now being marketed as in sequence with the previous two, suggesting that the parallel world is the same in each case. You can get it here.

This was the sf book that had lingered longest unread on my shelves. Next on that pile is Strange Bedfellows: An Anthology of Political Science Fiction, ed. Hayden Trenholm. 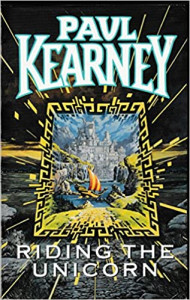