The baby in the park: an update

As often happens when you work on these things, a niggle of doubt continued in my mind about the baby's paternity. The mother's identity was clear enough; but I worried that my candidate for the father, who I referred to as "Bill" in my previous post, was really too distantly related me to be a plausible candidate for grandfather to "Patricia", "Derek" and "Bella". Their DNA links to me were of the order of third cousins; if Bill was their grandfather, they would be my fifth cousins, and one would expect the DNA connections to be much more diluted than they are.

I worried away at this, and went back to look at the list of my grandmother's first cousins, rather than anyone more distant; all descended from a couple who I will call Bill and Sally, born 1810s, who lived all of their lives near Boston. (A different Bill to the previous one.) I realised that I had missed one interesting candidate, who I will call "Edward", son of Bill and Sally's older daughter. Edward's older brother "Chris" had moved to California in 1909, so I had ruled him out, but I had somehow failed to notice that Edward and the middle brother "David" had stayed in the East. David spent most of his life in his home town in Massachusetts, but Edward had moved around a fair bit. He actually died in Philadelphia during the second world war; and, digging a bit further into the records, I discovered that he had also spent a lot of time in Pennsylvania from 1907 to 1917, including, crucially, that he lived in Philadelphia in 1916, exactly when the baby in the park was conceived.

To say that I was excited was an understatement. I realised also that although Edward was not himself known to have had other children, I had identified two of Chris’s great-grandchildren, Edward’s great-great-nephews, on another genetics site, myheritage.com - identified as "Henry" and "Ian" on this diagram. 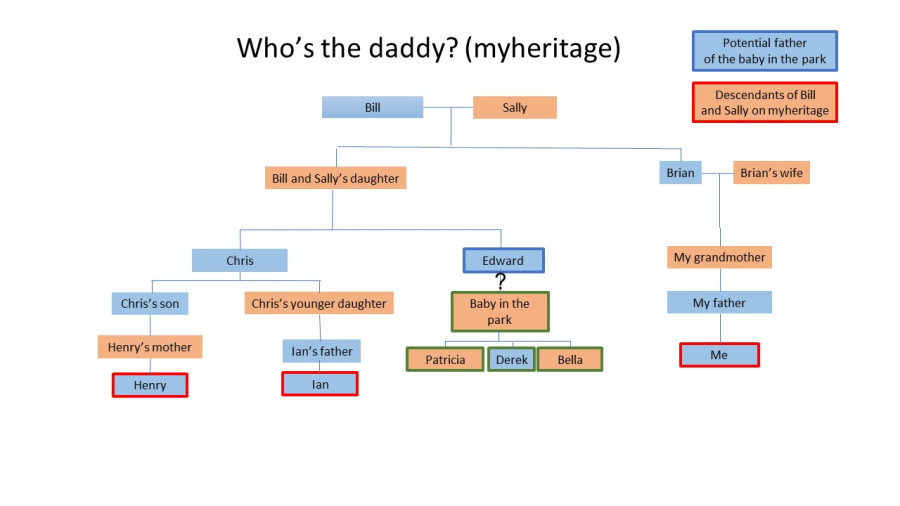 On a Saturday morning, my email pinged with a message from myheritage.com. I clicked excitedly to their site to see the analysis. Would it prove my theory that Edward was the father of the baby in the park?

Er, no. Patricia's link with Henry was actually weaker than her link with me. And her link with Ian was so weak that it was off the scale of measurability. My Edward theory looked to have been completely blown out of the water.

I went back to the drawing board. Specifically, I went back to 23andMe, the website where I had first signed up for this kind of thing. After a bit more digging around, I realised that no less than three other known descendants of Bill and Sally, my great-great-grandparents, were on the site. And we knew that the father of the baby in the park must have been a mature man in 1916. If he was also a descendant of Bill and Sally, there were only seven possibilities: There is no need to go into complexity here. It's pretty simple.

At this point I needed to persuade Patricia, Bella and Derek to all submit samples to 23andMe. Again, they needed little persuading. It took a while to get everything organised, but the results came back in the end, and for all three of them, the link with Kate was much closer than their links with Jo, Lenny or me. It looked very much like Frank must be their grandfather.

But Kate's link with six of the seven potential fathers of the baby in the park does include a father-son connection. Five of them are related to her through the father-son link between Albert and Frank, and the sixth is Albert himself. The only one of the seven with whom Kate could share X chromosome DNA is her own great-grandfather, Frank. (I myself do not share X-chromosome DNA with any of the other people in the chart, because my link to them all is through my father.) 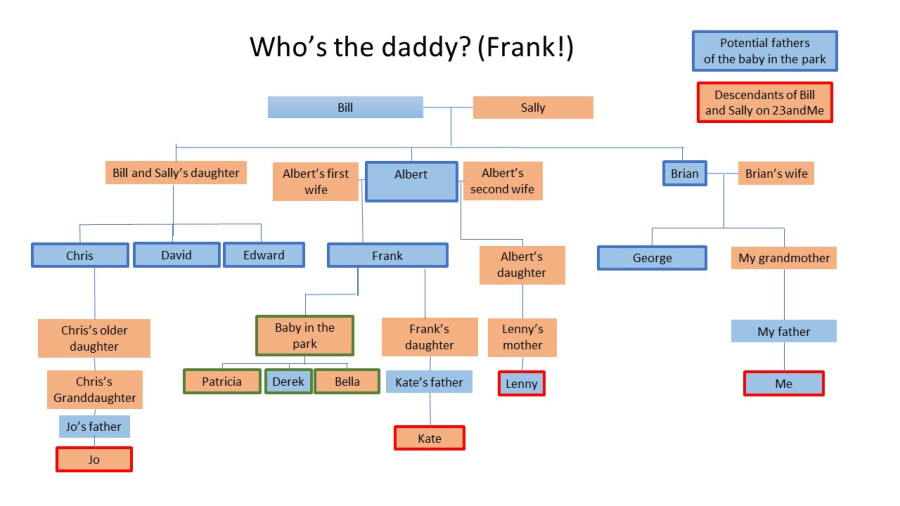 So, I think I have solved a 104-year-old mystery. We still don't know how Frank and Peggy got together, to set in motion the course of events that resulted in the birth of the baby abandoned in the park in Philadelphia. Frank was working in Buffalo that year, and also had to visit Washington DC now and then for business; we also know that his cousin Edward was living in Philadelphia. Perhaps Frank stopped off in Philly to visit Edward, and met with Peggy then? Then again, she was a musician; perhaps she was performing in DC or in Buffalo, and met Frank there? I doubt that we will ever find out.

But we do know for sure who the biological parents of the baby in the park were.

This sort of research is really difficult and not cheap. We needed Patricia, Bella and Derek to supply DNA samples to two different testing sites, and I think if I were not related to them myself, it would have taken a lot longer to get to the bottom of the mystery. It also frankly took a couple of nights of insomnia to clear my own concentration to the right point.

But I would love to do more of this. It's immensely gratifying. I've already been asked to help out with one of the Philippines cases mentioned here. In the end, everyone has a right to know where they come from. I have a real job, so I doubt that I will ever make a living out of this kind of work, but it would be really interesting to do it again.
Tags: genealogy
Subscribe