In my two previous posts on this year's BSFA shortlists (here and here), I remarked that it was very difficult to select preferences between the various nominees. For Best Non-Fiction, unfortunately, there are a number of nominees which I feel are too insubstantial or weak, or in one case too damn expensive, to be really suitable winners, and I had no difficulty in ranking the candidates. Obviously (and rightly) who ends up on the the short-list is determined by nomination votes rather than by any quality control process, and usually we get away with that, but I feel that this is one of the times that we haven't.

I nominated three essays and a book for this category, and none of them made the cut; they were ‘At the Brink: Electronic Literature, Technology, and the Peripheral Imagination at the Atlantic Edge’ by Anne Karhio; Beachcombing: And other oddments by David Langford; Christopher Priest's introduction to The Jonbar Point: Essays from SF Horizons by Brian Aldiss; and ‘Zones of Possibility: Science Fiction and the Coronavirus’ by Rob Latham. I rate the top two shortlisted nominees (out of six) as being on a par with, or better than, the four I nominated unsuccessfully.

Norminton’s Beacons is a less high-profile gathering of voices with an at times distinctly Scottish flavour, featuring stories by Alasdair Gray, Joanne Harris, Liz Jensen, Adam Thorpe, A.L. Kennedy and, once again, Toby Litt, and guided throughout by Norminton’s introductory edict that: ‘If hope is a moral imperative, telling stories may be one way of obeying it’. In ‘A Is For Acid Rain, B Is For Bee’ Harris ponders the near-future extinction of bees through the eyes of a child stumbling upon a rare, real bee while playing football in the park. In ‘Goodbye Jimmy’, Gray uses the distinctly Scottish conceit of ‘The Head’ and ‘Jimmy’ meaning God and his son, to debate the imminent demise of the world. In ‘We’re All Gonna Have the Blues’, Rodge Glass uses flood to great literal and metaphorical effect, describing a claustrophobic conversation between a chief campaign consultant and the leader of a major European environmentalist political party in a subterranean jazz club in Krakow. The drunker they get, the more their talk turns to the slow violence of climate change. And, as they turn toward the club entrance, there is a sudden ‘force pushing against the door’.

The recommended retail price of this book is £85.00, roughly the same cost as all ten shortlisted novels combined, though you can get it for a mere £75.09 via the Big River. I am not poor, but this seems a bit too much to me. It's an important topic, but if I spend £85 on climate change, I won't do it by buying this book. I did read the sample chapter provided to voters, and found it frankly rather dense.

Indeed, if we look more closely at Whuffie, we may find something altogether stranger. For example, Whuffie’s structure resembles a network of credit-debts, rather than a simple popularity leaderboard. This reflects how, in a large, complex society, an individual’s reputation may be many-sided and uneven. Moreover, although an individual can’t exactly transfer or exchange their reputation, they will tend to influence the reputations of people with whom they associate. Whuffie also captures this rich relationality of reputation, so that I could never definitively state my current Whuffie score in the same way I could state my current Uber rating, or number of Instagram followers. As Doctorow puts it Whuffie is

a score that a never-explained set of network services calculate by directly polling the minds of the people who know about you and your works, reducing their private views to a number. The number itself is idiosyncratic, though: for me, your Whuffie reflects how respected you are by the people I respect. Someone else would get a different Whuffie score when contemplating you and your worthiness. (Doctorow 2016)

This is an essay about economics, specifically money, as treated in Cory Doctorow's Down and Out in the Magic Kingdom, which I did actually read long ago, with a diversion to Pratchett's Making Money, which I have also read. It's an interesting enough topic, but not that interesting.

4) ‘Books in Which No Bad Things Happen’ by Jo Walton (Tor.com). Third paragraph:

I very much like Jo, both as a person and as a writer, but this is a mere 1100 words of book recommendations and not in the same league substantially as any of the other nominees. (Also, she has forgotten that one of the protagonists of The Fountains of Paradise actually dies at the end of the book, which is not really a happy ending.)

3) It’s the End of the World: But what are we afraid of? by Adam Roberts. Second paragraph of third chapter:

Seven centuries later, a real-life plague struck Athens, killing a quarter of the city’s population and setting the city state on a path to military defeat at the hands of Sparta. Greeks of the time had a simple explanation for the pandemic: Apollo. The Spartans had supplicated to the god, and he had promised them victory; soon afterwards, their enemies started dying of the plague. Hindsight suggests that Athens was under siege and its population swollen with refugees; as a result, everyone was living in unsanitary conditions and at risk of contagion in a way that the Spartan army, free to roam the countryside outside, was not. However, this thought didn’t occur to the Ancient Greeks and they blamed the god.

Again, I like Adam both as a person and as a writer, in particular (usually) his non-fiction, but this seemed much slighter than usual to me. It's a set of lists of sff writings on various apocalypses, caused by gods, zombies, plagues, technology, cosmic disaster and climate change, with some fairly light analysis. I'll give him good marks for including games, as well as books and films - it's become clear to me that no assessment of any theme in sff as it is being written today can be complete without the ludic dimension.

However. One unfootnoted and uncaveated remark about 7th century China particularly caught my attention: "many people believed the Han prince Li Hong was the promised messiah. His mother, alarmed that he would use his popular support to seize power, had him poisoned." Reasonably thorough, if brief, research on my part failed to support any of this; Li Hong the prince - 李弘 - is not even spelt the same way as Li Hong the Taoist messiah - 李洪; it's not clear that his mother poisoned him, and if she did, it was probably because of palace politics about his marriage, not because of any messianic pretensions, for which I found no further evidence. It's disappointing; his other work is generally better.

There is so much robot love in the history of science fiction that any attempt to examine it in a mere essay would end up more like a catalogue of stories. For this essay, therefore, I propose to concentrate on how science fiction writers use human-robot relations as a means of talking about forbidden love, and in particular diverse sexualities. Loving a robot is loving The Other.

Now (at last!) we are into the good stuff. Sorry to harp on the theme of cost, but this is a really good value book, £13.89 for eleven essays about aspects of love in science fiction, of which several are really outstanding: “Polyamory in Space: New Frontiers of Romantic Relationships in Science Fiction” by Josephine Maria Yanasak-Leszczynski, “Robot Love is Queer” by Cheryl Morgan, “Falling in Love with an Artificial Being: E. T. A Hoffmann’s The Sandman in relation to Philip K. Dick’s Do Androids Dream of Electric Sheep? and the Blade Runner film series” by Tatiana Fajardo and “Gormenghast and the Groans” by Barbara Stevenson (this last particularly useful as I was simultaneously struggling towards the end of the trilogy when I read it). Marked down slightly because I am not familiar with all of the works covered, but I enjoyed what I read about what I knew.

This is the first appearance of a trope that will recur throughout Christopher Priest’s career; indeed, it might almost be considered one of the defining characteristics of his work.

For the other two categories I have written up so far, I felt that almost all of the shortlisted nominees would be respectable winners and that my reported vote was more of a confession than a recommendation (and the same goes for most of the Best Novel nominees). This is different. BSFA voters must vote for this excellent, cheap (£2.99!), short book by one of the UK's best critics on one of the UK's best writers. I know and like both subject and author, but even if I didn't, I think this would stand out as a superb explanation of what Priest is trying to do with his writing and how he does it, and would also engage readers who are less familiar with his work. All I ask of my sf criticism is that it leaves me better informed about what I have read, and eager to try what I haven't, and this incisive and succinct analysis did both for me. Strongly recommended.

(Also, who knew that Christopher Priest shared an office with David Prowse, later the Green Cross Code Man and the body of Darth Vader, for a few months in 1967 when both were working for Heron Books? Small world.)

That just leaves the Best Novel shortlist. But it has ten nominees, so I'll write them up tomorrow and on Thursday, which will mean postponing my scheduled monthly book posts for October 2010 and March 2021 by a couple of days. 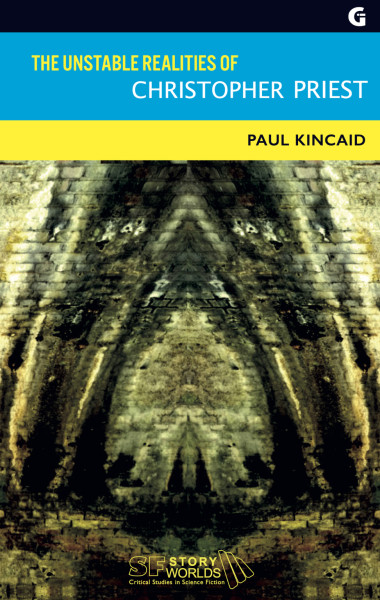 PS: I incorrectly stated yesterday that Aliette de Bodard was the first writer of colour to win the BSFA Award for Short Story. In fact that was Ted Chiang, for the excellent "Exhalation" in 2008. She was, however, the first writer of colour to win either Best Novel (in 2016, the 2015 award) or Best Non-Fiction (in 2019, the 2018 award); as it happens, I counted the votes on both occasions. Apologies for the mistake.
Tags: bookblog 2021, bsfa 2020, writer: adam roberts, writer: christopher priest, writer: jo walton, writer: paul kincaid
Subscribe