Second paragraph of third chapter of Book One: The Boroughs:

He could remember how he’d got out of the life, the business, the proverbial ‘Twenty-five Thousand Nights’, as he’d heard it referred to. Far as Freddy was concerned, it might have happened yesterday. He’d been under the arches down Foot Meadow, sleeping out the way he did back then, when he’d been woke up sudden. It was like he’d heard a bang that woke him up, or like he’d just remembered there was something that was happening that morning that he’d better be alert for. He’d just come awake with such a start that he’d got to his feet and he was walking out from underneath the railway arches and across the grass towards the riverside before he knew what he was doing. Halfway to the river it was like he’d woken properly enough to think, hang on, what am I jumping up like this for? He’d stopped in his tracks and turned around to look back at the arches where he saw another tramp, an old boy, had already nicked his place where he’d been kipping, on the earth below the curve of brickwork up against one wall, had even nicked the plastic carrier bag of grass that had been Freddy’s pillow. It was bloody typical. He’d walked back a few steps towards the archway so that he could see just who the bugger was, so that he’d know him later. It had taken Fred a minute before he could recognise the nasty-looking piece of work, but once he had he knew he’d never get his spot back now. There was no point in even trying. He’d been moved on, and he’d have to just get used to it.

They trespassed upon babies’ dreams and took short cuts across the thoughts of writers, were the inspiration and ideal for every secret club and Children’s Film Foundation mystery, for all the books, for every Stealthy Seven, every Fearless Five. They were the mould; they were the model with their spit oaths and their tramp marks, their precarious dens and their initiation tests, which were notoriously tough: you had to have been buried or cremated before you could join the Dead Dead Gang.

Spoonin’ the tousled egg into her scrambled head she wells, as iffer, on the past now. Sadly hatched in Triste at seven past the century and seven past the year, born to the clench and stamour of a paupoise warld, she was denied the mummer’s teatre. Not a dripple Nora drop was she aloud. The molcow was sucked dry, by George, who went from one mamm to an udder all of his serpenitentine life. Eve’n the girden of her garlhood he had snaken from her, eden then, with him the dirty apple of their Mermaw’s eye and allwas raising cain, which Lucia had resistered for as long as she was abel. He’d been furteen, shy was only ten, to pet it baldly. Wristling under milky and transluciant sheets in a suck-session of clamped, crusterphobic rended rooms, the da off summerwhere with all his righting and the mudder rural, pagan in her unconcern, forever standing pisspots on the parlour table where they lifft their venerable beaded halos on the varnish. Giorgio’s dragon would rear up, out from the scampy wondergrowth and orgiantly demanding her at-ten shuns while their Moider only smirled, ingently dull, and let her borther press a head with his idventure, up into the little light, the little depth.

I have not been to Northampton since 1985, when I worked for two months on an archæology site in nearby Raunds. It did not seem to me a strong candidate for hosting a complex mythic geography. However I'm very sympathetic to exploring the dinnseanchas of a particular place - Bryan Talbot has done it for Sunderland, Ciaran Carson for Belfast. The three books have differing formats: the first is a sequence of purely historical vignettes, most connected to the characters who will appear later; the second is a connected narative about one boy's adventures in the afterlife, very much tied to the streets of the town as they developed historically; and the third unfolds again into a less sequential collection of vignettes, most of which have a mystical element.

The writing is dense and I found it slow going, and also I regretted that the map of Northampton at the front of each book is printed across two pages, so that important details get lost in the central crease. The third chapter of Book Three, "Round The Bend", is particularly tough going, adopting the style of James Joyce to tell a story about his daughter Lucia who spent the last thirty years of her life in Northampton's mental hospital; here I basically put down my paper copy of the book and read the text and explanations at this fan site, without which I think I might have given up. (Other inmates at the hospital included the composer Malcolm Arnold, the poet John Clare, and Violet Gibson who shot Mussolini in 1926, but did not kill him.)

Anyway, it's an ambitious and mesmerising piece of work, pulling together a vast amount of information and imagination. There are some nice emotional bits in there as well, particularly at key moments of the story of the Vernall family whose narrative is at the core of the book. I do think it could have been shorter and tighter (it's almost 1300 pages in length). But I can now at least wear my badge with pride. You can get it here.

This was my top unread book acquired in 2016. Next on that pile is This Must be the Place by Maggie O'Farrell. 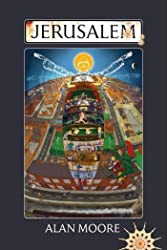