What if we re-run the Boundary Commission for 650 MPs, 18 in Northern Ireland?

Rumours started last week suggesting that the newly re-elected British government now plans to drop the current Boundary Commission proposals to cut the House of Commons to 600 MPs, and to start a new revision process which would keep the number of MPs at 650. It was always going to be a stretch to get 50 MPs to vote for their own abolition, so I am not at all surprised that this is where we will end up. Remember that the orignal plans to cut the number of seats by 50 were killed by a disagreement between the then coalition parties, and that the current proposals got mired in the general Brexit malaise, as well as a particular Northern Ireland wrinkle that I'll discuss briefly below.

I would expect that any change to the rules will retain the current instruction to the Boundary Commission to make constituency sizes as equal as possible. There is a real problem with the current situation. The average size of electorate for a UK constituency is 73,173 voters; for England, it's 74,851, for Scotland it's 68,696, for Northern Ireland 71,887 but for Wales only 57,996. This basically means that a Welsh vote is worth 1.29 English votes, in terms of the number of MPs it can elect; Wales has 40 MPs, but on a proportional basis should have only 32 if the total is 650. Scotland is likewise a little over-represented, with 59 MPs rather than the 56 it should have proportionally. Northern Ireland, with 18 seats, comes out about right.

There is no particularly good historical reason for Welsh over-representation. No policy decision was ever made for that purpose. It happened because successive Boundary Commissions found their maps easier to draw with more seats, and then one thing led to another. The effect is to help the Labour Party, a little, in that its MPs represent seats with an average electorate of 72,180, while Conservative MPs have an average electorate of 74,621. (Since you asked, for other parties with more than one seat: Lib Dems 68,218; SNP 69,678; Plaid Cymru 50,095; DUP 71,839; SF 72,547; SDLP 72,165. Smaller GB parties, apart from the Greens, also benefit from the status quo.)

So the four Boundary Commissions will likely be tasked to ensure that all seats should in principle be within 5% of the UK average (apart from the Isle of Wight and the two Scottish island constituencies). There is some extra wiggle room allowed for Northern Ireland, given the small number of seats and limited space, so seats can vary by 5% of the Northern Ireland average even if this takes them outside the limit of 5% of the UK average, if the Commission finds it necessary.

A quick aside on this point: I personally urged the Commission not to be shy about invoking this extra flexibility for the last round of revisions, in order to make its own work easier. The Commission did so for both its revised proposals and its final report, but this was challenged by an anonymous litigant in the courts through judicial review. The judge found that the Commission was not wrong to invoke the lower limit, but could have explained itself better. (See here, paragraph 48. The judge also found that the Commission should have taken responses in the final stage of consultation more seriously than it did, but did not strike down the final proposals, so they stand until parliament rejects them.) The numbers were particularly brutal last time - this time round, if we are working from December 2019 electorate figures or anything like them, it may well be possible to draw a map that does not need the extra flexibility that is permitted.

(There is a not very interesting discussion to be had about whether electoral boundaries should take account of the number of registered voters or the total population. Worldwide, about a third of countries allocate seats on the basis of the number of voters, and about half on the basis of total population. Personally I incline a bit towards basing them on the number of voters, which in the UK is just as easy, if not easier, to track, and also I don't really see why areas with larger non-voting populations - children and non-citizens - necessarily deserve greater representation. But I am not especially bothered.)

Coming back to the main point, what are the likely consequences for Northern Ireland if the government does proceed to direct the Boundary Commissions as described above? The first thing to note is that there is already a big problem with the sizes of the 18 constituencies. If we take the figures for electorate of each seat from the December 2019 election, we can see that East Antrim votes are worth 1.29 as much as Upper Bann votes (coincidentally, the same ratio as for Wales and England). NB that both East Antrim and Upper Bann are held by the DUP; looking at the five largest and five smallest seats, in both cases three are held by the DUP and two by SF, so this isn't especially a party political issue.

I should add a caveat that we don't have exactly the right figures to calculate with, so everything below needs to be taken with a pinch of salt. The Electoral Office has published the parliamentary electorate for the existing 18 seats and for the old electoral wards from which they are constructed; and the seats will be drawn to match the parliamentary rather than local government voters. British, Irish and Commonwealth citizens can vote in all elections; citizens of the other 24 EU countries can vote in local and Assembly elections, at least for now; expat voters can vote for Westminster elections, but not local or Assembly elections.

However the new seats will be drawn on the new wards, and the electoral office has published only the local government electorate for those wards, which will be larger than the parliamentary electorate. In some cases there are very big differences. Several of the old Dungannon wards recorded between 20% and 35% of local government voters who do not have parliamentary votes, a total of 2,600 voters; these were presumably mostly EU citizens connected with Moy Park.

Looking at the quota for the UK as a whole (the average electorate for the 647 seats apart from than the three island constituencies) we can see that eleven of Northern Ireland's 18 constituencies deviate from it by more than 5%. The UK-wide quota would be 73,290, so in principle each seat should have no less than 69,626 voters and no more than 76,954. Under the rules, Northern Ireland is allowed extra wiggle room, if necessary, taking the lower limit down to 68,293. (Which would mean that East Londonderry is actually OK; but I think the geography of West Tyrone means that it will have to change anyway.) This map shows the divergence from the UK-wide quota of each of the 18 Northern Ireland seats, and the table gives the same figures and also the number of voters by which each seat exceeds or falls short of the permissible size (including also the potential lower margin for Northern Ireland). 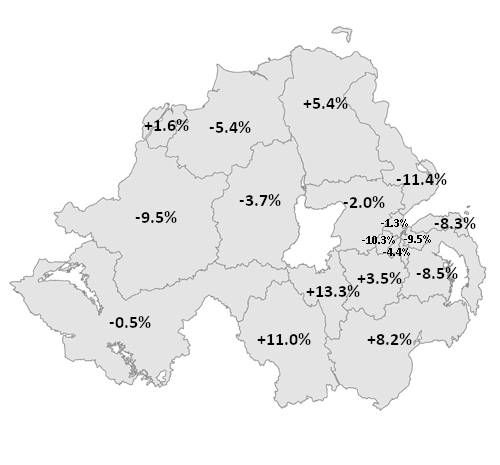 (Maps above and below adapted from the one on the Northern Ireland Assembly website.)

The good thing about this from the Boundary Commission's point of view is that there are a number of seats which will hardly have to change at all. There will have to be some smoothing at the edges, because the map of electoral wards, which are the building blocks for the constituencies, has been drastically changed and there is no seat whose boundaries exactly match the new ward boundaries. But if we colour in the under-quota seats in red, the over-quota seats in blue, and the within-quota seats in green, we can see that the question resolves into three distinct geographical challenges. 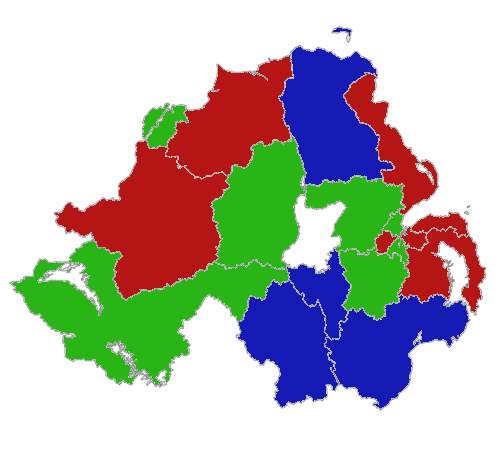 First of all, West Belfast is an isolated undersized constituency, at 10.3% below the quota. But it borders Lagan Valley, which is 3.5% above the quota. If 4,000-6,000 Lagan Valley voters could be found, conveniently located on the border with West Belfast, they could be moved in, keeping both seats within limits. The two wards of Derryaghy and Lambeg are conveniently located on the border with West Belfast, and together they have 5,440 local government voters (the number of Westminster voters will be a bit less), so I would not be surprised to see West Belfast being extended further south (as was proposed by the Boundary Commission for the 17-seat map).

That leaves two broad zones to consider. First, the south-eastern belt of six seats, three of them contiguous and over-sized (Newry and Armagh, Upper Bann and South Down) and three of them contiguous and undersized (East Belfast, North Down and Strangford). If the neighbouring seats of Fermanagh and South Tyrone, Lagan Vally and South Belfast are left largely alone due to already being the right size (apart from straightening out the boundaries for the new wards, and the adjustment to the Lagan Valley/West Belfast border mentioned above), there aren't a lot of solutions. I could see the following emerge:

The northern belt of four constituencies is probably the most difficult to resolve. West Tyrone is 9.5% under the quota; East Londonderry 5.4% under; North Antrim 5.4% over and East Antrim, the smallest constituency, 11.4% under. There aren't enough voters there for four seats with at least 95% of the UK quota each (there are, just about, if we take the special lower limit for Northern Ireland, but even then I don't think the geography of the wards makes it possible). It's also difficult to justify much tinkering with the boundaries of the neighbouring seats, and even if we could, the wiggle room on their numbers is limited. My best guess would be that:

The changes to East Londonderry and West Tyrone/Sperrin in particular will look striking on the map, but actually will not involve all that many people owing to the sparse population of the areas concerned. The biggest single shift of voters would be in the south-eastern corner of Northern Ireland with Downpatrick moving from South Down to Strangford/East Down.

That's also the biggest political shift. Strangford/East Down certainly gets enough Nationalist voters for them to elect a Nationalist to the Assembly, and to give the DUP's opponents at Westminster elections a tactical boost; South Down on the other hand certainly loses a Nationalist seat at Assembly level. The Ards Peninsula moving into North Down at the cost of more favourable territory in Holywood certainly makes life interesting for Stephen Farry of the Alliance Party, but it's far from a killer blow. Those who feel that they may have something to lose from the process will of course have plenty of time and opportunity to make their voices heards.

This will be a lot less painful than the proposed maps when we were looking at a reduction in the number of seats from 18 to 16 or 17, and frankly I hope that something like this goes through. I think the 5% variation in constituency size is way too tight - worldwide, only the notoriously contested redistricting of the seats of the U.S. House of Representatives has a tighter margin - but I also think that we will probably need to see a couple of revisions go through with that unrealistic restriction before the powers that be catch themselves on and it gets changed. (I have been told that the Conservatives were originally looking at a 2% rather than 5% variation in constituency size, back in 2008; that really would have been difficult and painful to implement, and would certainly have meant breaching ward boundaries all over the place.)

So there we go. Of course, if the government sticks to the 600-seat commitment, rather than returning to 650 seats, the above speculation will be largely irrelevant. And if the 5% wiggle room is made more flexible, more imaginative solutions may be possible. In the end, rearranging boundaries for 18 seats is a lot less painful than chopping one, let alone two, from the map.
Tags: world: northern ireland
Subscribe