The Sound of Music won the Oscar for Best Picture of 1965, and picked up another four: Best Director (Robert Wise), Best Music (Irwin Kostal), Best Sound Recording and Best Film Editing. Doctor Zhivago also won five Oscars that year, beating The Sound of Music for three of them. 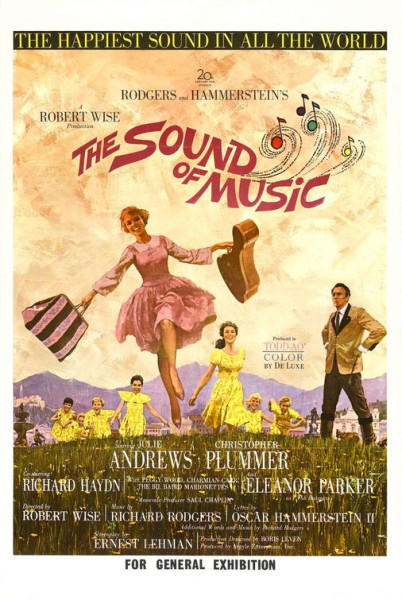 The other Best Picture nominees were Darling, Doctor Zhivago, Ship of Fools and A Thousand Clowns, none of which I have seen. For once, IMDB users agree with the Oscar voters, with The Sound of Music on top of one ranking and second to For A Few Dollars More on the other. I haven't seen For A Few Dollars More, but I have seen a half-dozen other films from 1964: Thunderball, Help!, The Ipcress File, Those Magnificent Men in their Flying Machines, Dr Who and the Daleks and The Monkey's Uncle (mostly from Saturday TV in the olden days). I must say I am aligned with both the Oscar voters and IMDB users; The Sound of Music is the best of the lot. In the improbable case that you are not familiar with it, here's a trailer.
You know what it's about, but I'll remind you anyway. Julie Andrews plays trainee nun Maria, who is sent as governess to Captain von Trapp (who has some surprisingly mature children for a man of his apparent age). She erodes his gritty reserve and they fall in love. Then, in a swerve from family drama to global affairs, Nazi Germany annexes their country, von Trapp escapes conscription into the Third Reich navy and they flee across the mountains to Switzerland.

And, well, it's just brilliant (such a relief after I found that My Fair Lady had aged rather badly). There's one minus point that I will come to, but in general I loved rewatching it. It's going right to the top of my list - well, in second place behind Casablanca, which is also about resisting the Nazis and has a more compelling plot, but ahead of An American in Paris, which despite the lovely music, doesn't do much for its women characters. In particular, I appreciated the emancipatory lyrics of "Climb Ev'ry Mountain", not a revolutionary song, but still one which calls for self-belief and personal ambition. It is the climax of the film, of course, but it's introduced by the Reverend Mother challenging Maria to live for herself.(The Liberal Democrats have a version of this which applies to election campaigns.)

We have two returnees from previous Oscar-winning films. Anna Lee, who played Bronwen in How Green Was My Valley twenty-three years ago, is Sister Margarethe here. (She has barely changed!) 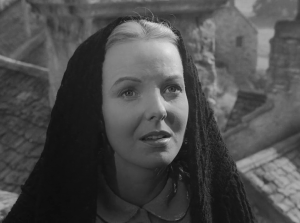 And Norma Varden, whose husband got pickpocketed in Casablanca twenty-one years ago, returns as Frau Schmidt, the Captain's housekeeper. One important returner who we have not in fact previously seen is Marni Nixon, who dubbed the principals in both West Side Story and My Fair Lady, but here is allowed to appear in the flesh (because Julie Andrews did not need to be dubbed).

I mentioned that there is one negative point. I'm afraid it's our old friend whitewashing. To my surprise, the original book recalls a very friendly encounter between the von Trapp family while they were still in Austria and the great American singer Marian Anderson. OK, the film considerably truncates the family's singing career in Austria, but it should be noted that one of the elements of the story that was thus excised was an actual meeting with a black woman musician. (More than half of the book is about their lives in America, and they have plenty of encounters with people of colour.)

But otherwise, it's sheer joy. I'm going to give a particular shout-out to Charmian Carr, aged 22 and playing 16-year-old Liesl, who is by far the best performer of the kids but lets the others all get their turn, apart of course from her own song.Incidentally the real eldest daughter, whose name was Agathe not Liesl, was gay and ran a kindergarten in Maryland for many years with her partner.

And there's the completely bonkers "Lonely Goatherd", which certainly gave me as a child the completely false idea that you could knock together a puppet show perfomance in a wet afternoon.
The settings of Salzburg and the Alps are mercilessly exploited. Here's the picnic scene in Do-Re-Mi (where the kids are wearing clothes that Maria has whipped up from curtains ovenight):
The best songs get repeated in a slightly different context. "My Favourite Things" marks both turning points for Maria's relationship with the children, when she bonds with them and when she comes back.
The songs can also distract from just how well the film is directed and acted. I give you the dance of Maria and the Captain (my friend points out that Maria is the only one at the party who doesn't have a full-length dress), illustrating also the talents of Julie Andrews and Christopher Plummer in the lead roles:
And "Something Good", a less memorable song, gets some memorable cinematography:
And I must say that my curmudgeonly cynical soul was moved to tears at the moment when the Captain's heart is melted by his children's singing.
It's all fantastic, really.

The Sound of Music has totally permeated our culture. Here's a flashmob at Antwerp Central station perfoming Do-Re-Mi to the bemusement of commuters:
Here's Lady Gaga with an extraordinary performance of selections from The Sound of Music at the 2015 Oscars - particularly worth it for the moment at 4:11 just after she finishes, looks into the wings and realises what's happening next.
Also in 2015, infamous Slovenian industrial rock group Laibach performed two concerts in North Korea, including mostly songs from The Sound of Music, which is used for teaching English in the DPRK. There is of course an album, and several songs are available on Youtube (including the title song and "Lonely Goatherd"). The littlest of the girls in their "So Long, Farewell" is the daughter of a friend of mine (she's also in "My Favourite Things").
Well. My next Oscar-winning film takes me back to Merrie England with A Man for All Seasons. I don't anticioate it being as much fun.

Maria von Trapp's relationship with the movie was complex and intimate. Famously, she was not invited to the premiere, even though she and two of her daughters make a brief cameo appearance in "I Have Confidence".

However, she was sufficiently laid back to teach Julie Andrews how to yodel.
The movie was based on her book, The Story of the Trapp Family Singers, which came out in 1949. Here's the second paragraph of the third chapter:

Desperate, I looked for help.

Actually only the first part of the book deals with their time in Austria; the rest is about their experiences in America. Neither book nor film explains much about Maria's own background - apparently both her parents died by the time she was ten, and various other arrangements did not work out; she did get a professional teaching qualification before entering the convent.

The major change to the story is the telescoping of time. Maria and Georg married in 1927, when he was 47 and she was 22 (when the film was made, Julie Andrews was 29 and Christopher Plummer 35); over the next ten years the family became noted performers, especially when most of their money was wiped out in a bank crash and they needed the income; Maria had three more children to add to the seven from the first marriage; the turning point when they decided to flee was after they were invited to sing for Hitler on his birthday after the Anschluss, and knew that they could not bring themselves to do it but also could not stay in the Reich if they said no. And they fled to Italy, where Georg von Trapp had citizenship due to havig been born in Zara when it was Austrian (it was then Italian and is now the Croatian city of Zadar).

Most of the story about her romance with Georg von Trapp is consistent between the book and the musical/film, and a lot of the little details about life in the Trapp household are taken from the book. Maria's rival for Trapp's affections is described as "Princess Yvonne", a distant cousin of the first Mrs Trapp, and by implication of Austro-Hungarian nobility. I have done a bit of detective work on this. The first Mrs Trapp was born Agatha Whitehead, into a family of British naval engineers who moved to the Austro-Hungarian coast (now in Croatia) - her grandfather invented the torpedo, and his son carried on the work. Her mother was an Austro-Hungarian aristocrat, who would have had many eligible nieces and cousins I suppose; also her father's sister married Georg von Hoyos, her cousin was the diplomat Alexander von Hoyos, and there are plenty of candidates on that side as well (I see an Ilona who would be the right age and is almost "Yvonne"). Incidentally Georg von Trapp was a submarine captain, and personally sank eleven Allied ships in the first world war, six of them British; we don't hear much about that.

The book is frank about the problems of impoverished gentility and very direct about the plight of refugees trying to get permanent status in the USA - it is of course inhumanly difficult now, but it wasn't all that easy back then even for nice white people. Maria is also very up front about her personal piety and devotion to the Catholic faith - it’s entirely consistent with the story of her vocation, and it’s an element that is only alluded to as background colour in the film.

It's a celebrity memoir, written for fans, but also I feel putting down on paper the stories that Maria had told her friends and family over many years. She finishes with reflections on the fundraising that the family had done for humanitarian relief in Austria after the war ended, an emotional but also super-organisational task, and on Georg’s death from lung cancer in 1947 on the Vermont farm that the family set up as first a refuge and then a business, and which is still run by the grandchildren. Their legacy remains strong. You can get the book here.