The monuments of Laeken cemetery, especially those by Ernest Salu

The other half of yesterday's trip was to inspect Laeken cemetery in northwestern Brussels. There is a cluster of spectacular monuments close to the church by one or other of the three generations of sculptor who shared the name Ernest Salu; the founder of the line lived from 1846-1923 and started his funerary business in the 1870s; his son lived 1885-1980 and I think must have been responsible for the best of the monuments; and the last Ernest Salu lived 1909-1987, clsoing the business in the 1980s more than a century after his grandfather had started it.

The jewel in the collection is this amazing monument to Max Pelgrims, son of the industrialist Eugène Pelgrims, killed in action at the age of 24 in the early days of the First World War (defending Aarschot, not so far from here). 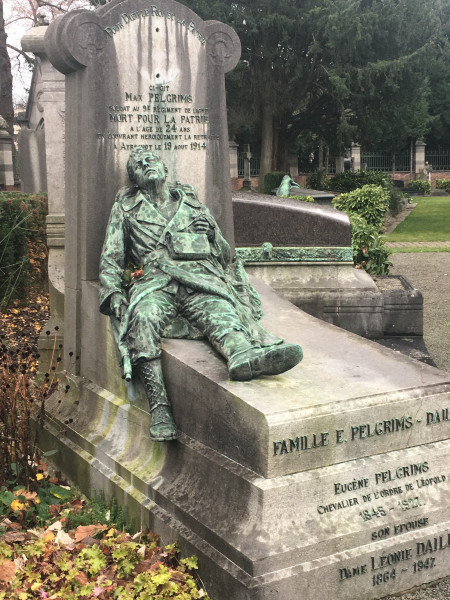 It seems that Eugène Pelgrims and his wife Léonie Dailly had no other children. He survived Max by thirteen years; Léonie outlived him by another twenty.

There are a number of mourning bronze ladies, decorously draped acrodd the tombstones. My favourite is this lady commenorating Jules Denis and his wife Marie Devos. I have not been able to identify them (there is a Jules Denis who was active as an architect in Brussels in the 1880s, but that is too early).  He was 47 when he died in 1919; possibly a victiom of the great flu epidemic, or of war injuries? She lived another 44 years without him. 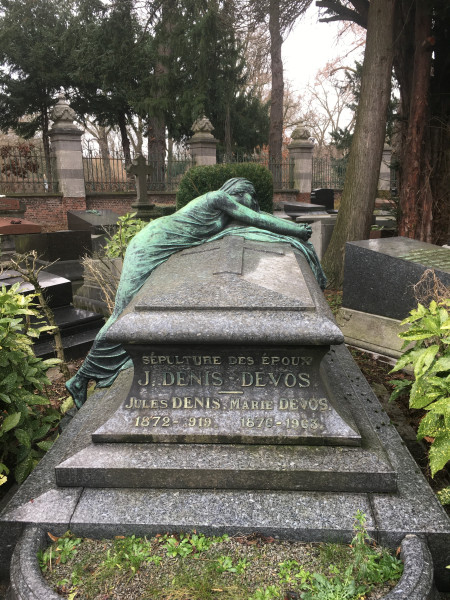 I didn't note the dates for this lady mourning the Duco-Netels family (of whom I was unable to discover anything else) but she's clearly a bit more Art Deco from the style of the letters, so perhaps about ten years after the Denis-Devos tomb. Unlike most of the others, she is standing up thoughtfully. 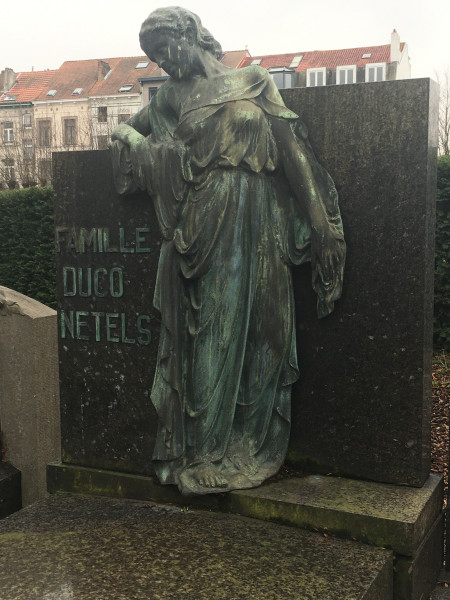 General Storms, a leader of the brutal colonial enterprise in the Congo, was already familiar to me from his statue in the Sqaure de Meeûs around the corner from my office. This is a nice framing of what must surely be another Salu bronze. 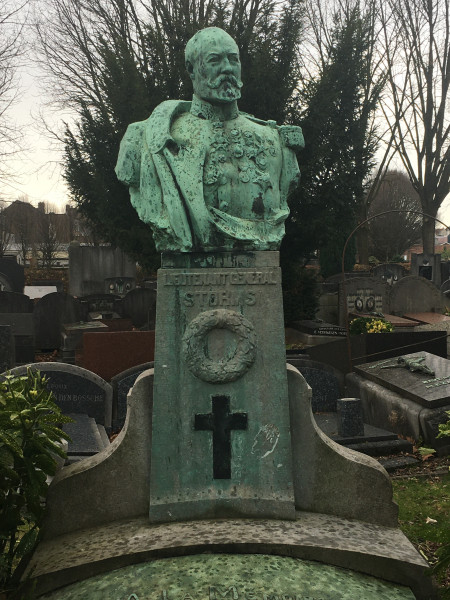 What is this lady looking at? 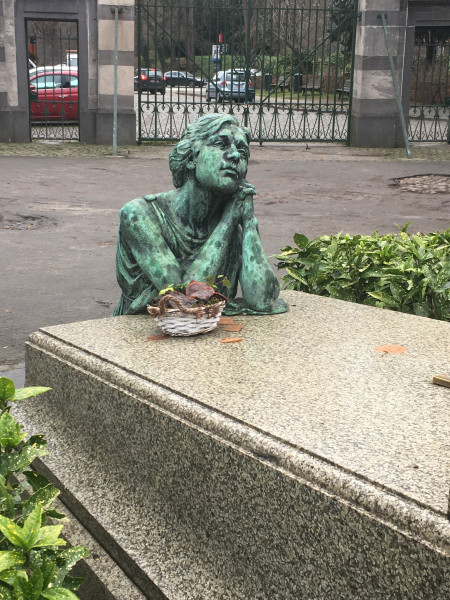 It's not just the resting place of the D'Haeyere family; she's also right next door to one of the genuine castings of Rodin's The Thinker. Art collector Jef Dillen bought it in 1927, after the city of Paris decided that it didn't fit in front of the Pantheon. He ended up underneath it eight years later (he died in 1935). 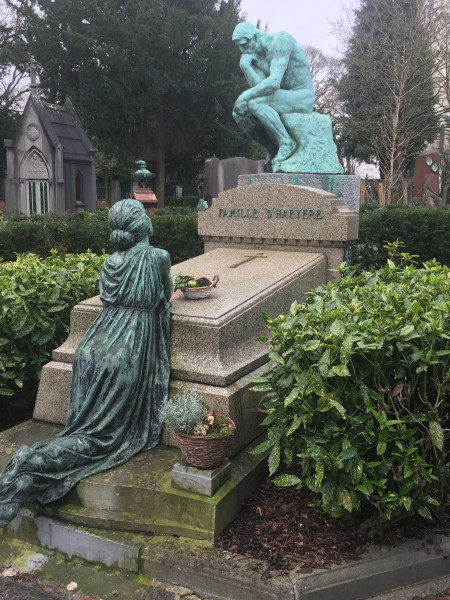 Back to the Salu sculptures again. This woman with outstretched arms commemorates the Belgian composer and musician Jules-Emile Strauwen. (I've enhanced the picture to get the colours properly.) 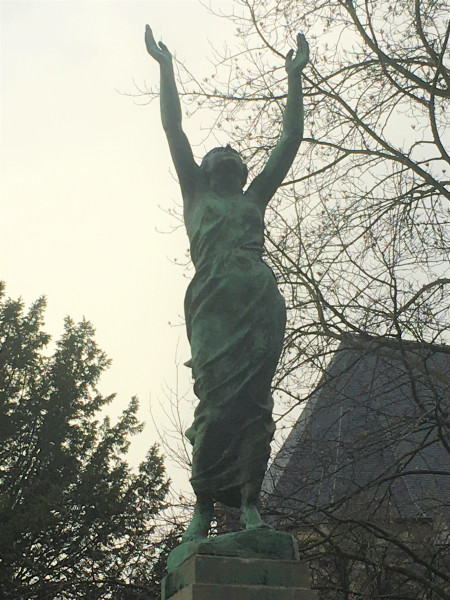 And a very early Salu sculpture in marble commemorates another musician, the great pianist Marie Pleyel (I love the claws under the casket). Liszt and Berlioz were in love with her, Chopin dedicated Nocturnes to her, but she married Mr Pleyel instead; his family made the pianos on which they all depended. The marriage didn't last, but she lived on and rests here. She dies in 1875, so must have been one of the first Ernest Salu's very early customers. Finally, here's a carved tree with the title "Cycle of Life and Death", by the contemporary sculptor Anton Klijnsmit. I'm giving you details of the two figures, presumably Life and Death respectively. 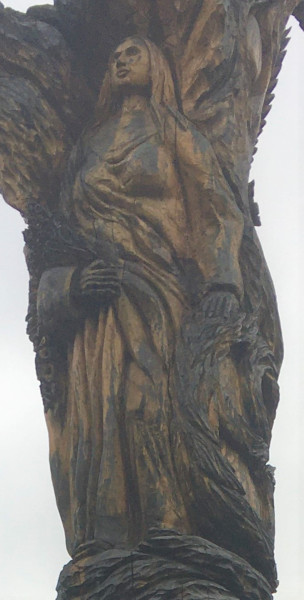 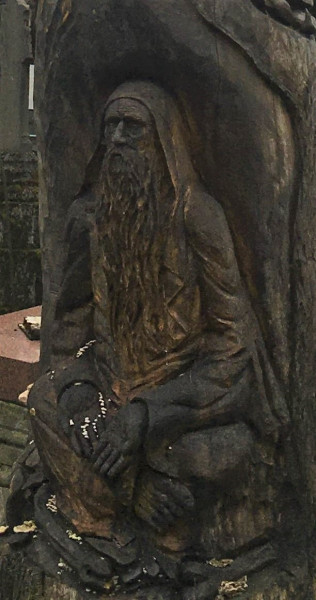 Our tactical mistake was to visit on a Thursday rather than a Saturday or Sunday, when the former workshop of the three Ernest Salus is open to the public. Something to do on a future free weekend.
Tags: world: belgium
Subscribe