Peggotty had a basket of refreshments on her knee, which would have lasted us out handsomely, if we had been going to London by the same conveyance. We ate a good deal, and slept a good deal. Peggotty always went to sleep with her chin upon the handle of the basket, her hold of which never relaxed; and I could not have believed unless I had heard her do it, that one defenceless woman could have snored so much.

I thought that this was one of the Dickens books that I had read many years ago, but in fact it was all completely new to me - I guess that the characters of Mr Micawber and Uriah Heep are so familiar that I thought I must have read the book. It's not my favourite Dickens - that is A Tale of Two Cities - but it is still pretty enjoyable. It relies a bit too much on coincidence (central London must be a very small place) and the Murdstones and Uriah Heep are gruesomely irredeemable, but in general it's an interesting Bildungsroman which is obviously autobiographical to an extent. The subplot that was both the most painful and the most compelling to read was Copperfield's first marriage to the gormless Dora. The detail that jumped out at me was the "Roman" bath near the Strand in London, which I must go and look at next time I am in that part of the world.

To my surprise, I discovered a link with Blake's 7:

TIL that both Gareth Thomas and Jacqueline Pearce were in the 1974 BBC David Copperfield (as Murdstone and Rosa Bartlet respectively). pic.twitter.com/A41bQudWSg

This was the top book on my shelves that I thought I had read and not reviewed online (though as it turned out, I hadn't read it at all). Next on that list is The Three Musketeers, by Alexander Dumas. 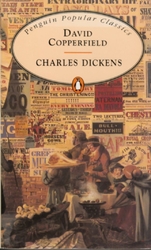