At the end of June I listed my top tweets of the year so far, mainly out of general interest but partly to see how I could maintain my position in the list of Top 40 EUInfluencers, which I scraped into in 2017 and 2018 (in 37th and 39th place). In fact I didn't make it this year, but I think some reflection one what's been successful and what hasn't in the last three months' tweeting. This time I've taken the Twitter analytics and looked at the top tweet in each category, ranked here by aggregate rank in all categories. That gave me the following top ten tweets from the last three months. Six of them are about Brexit, three are about sf and one is just an article which I found interesting and thought worth sharing.

Because I am not confident in Livejournal's abilty to embed tweets, I am embedding screenshots as well; apologies for double emploi.

10) This (from just the other day), a response to the writer Robert Harris had the highest engagement rate at just over 27%. I guess "engagement rate" is engagements (those who click on it) divided by impressions (those who see it in their stream). Replying to someone with a lot of followers (Harris has 71,000) will probably increase the rate of engagement. 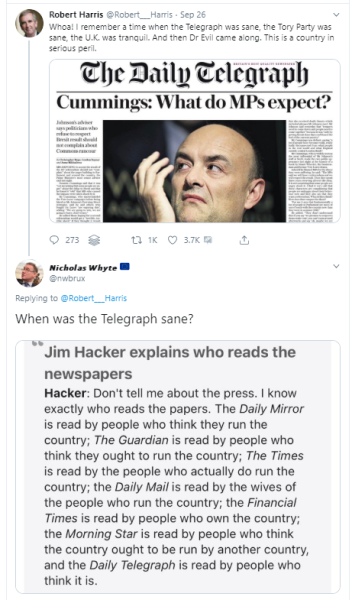 When was the Telegraph sane? pic.twitter.com/JvGwMhrVaA

9) This got the most permalink clicks (clicks onto the tweet itself from desktop views), which is gratifying as it is me quoting myself. Clicks through to the June tweet won't appear in the stats for July-September tweets, but it too picked up a fair bit. 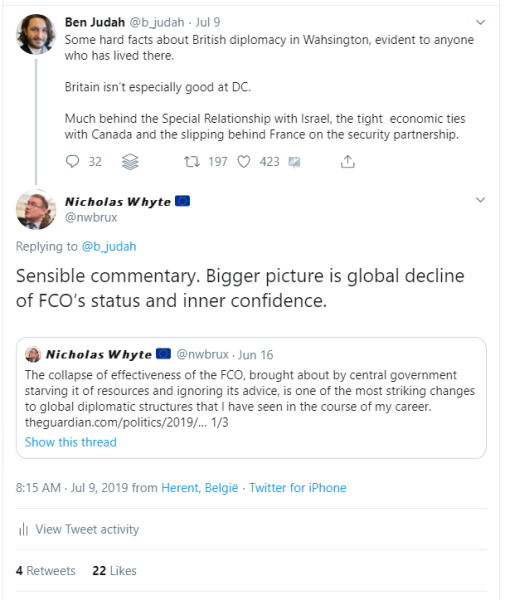 8) This got the most impressions, probably because Neil Gaiman retweeted it to his 2.7 million followers, and also the most detail expands, not that there were many details to expand: 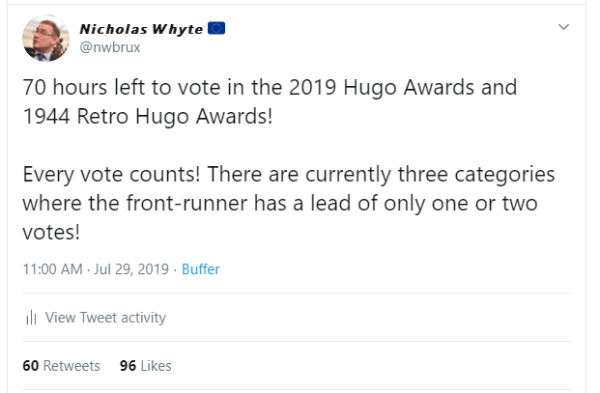 7) This got me the most profile clicks and the most new followers, boosted by the fact that Peter Foster himself retweeted it (and he has 47,500 followers): 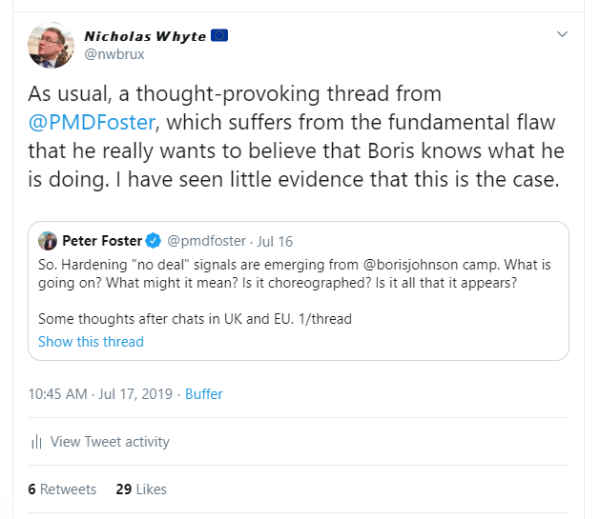 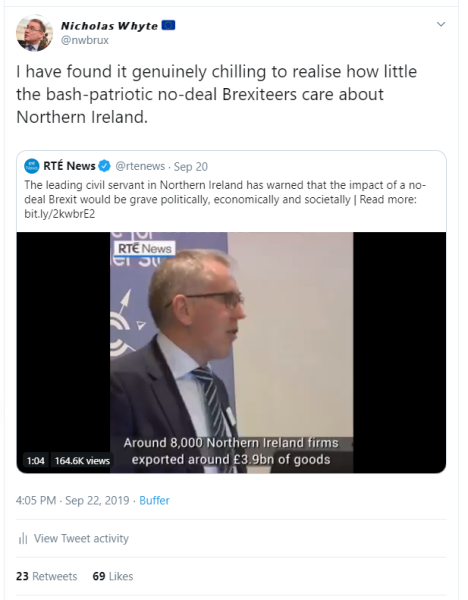 I have found it genuinely chilling to realise how little the bash-patriotic no-deal Brexiteers care about Northern Ireland. https://t.co/jx1gZVtJg2

5) This got the most URL clicks, an interesting case of content completely unrelated to either sf or Brexit, but the fact that the lede featured the phrase "a sex dungeon, and Dick Cheney" possible encouraged people to look at the article. It is a great piece. I Was A Cable Guy. I Saw The Worst Of America. https://t.co/uXr2Qk9zxS Wow.

4) This got the most hashtag clicks (I don't do hashtags as much as I maybe should), and scored well enough on other metrics: 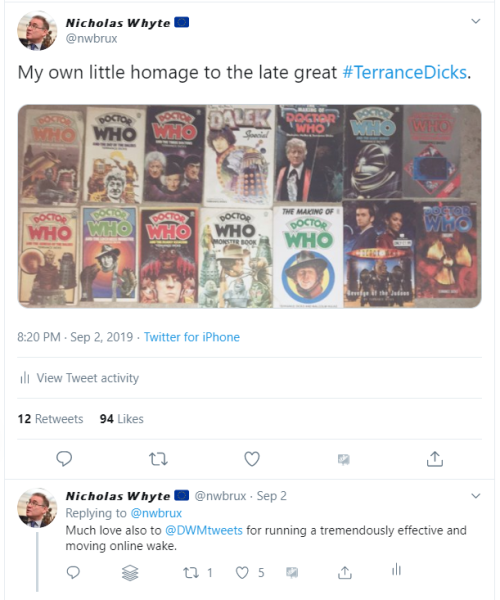 3) And this got the most media views, a clip that I snipped myself from the Parliament web feed; it is being quoted by others to reiforce the basic historical point being made. 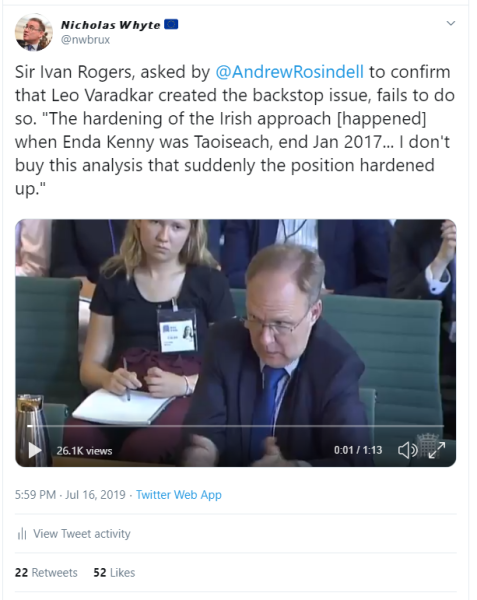 2) This got the most engagements, also the most media engagements (helped perhaps by having three media rather than just one). It was retweeted only twice, by Andrew Duff himself (with 16,000 followers) and by sf writer Charles Stross (with 61,000 followers) 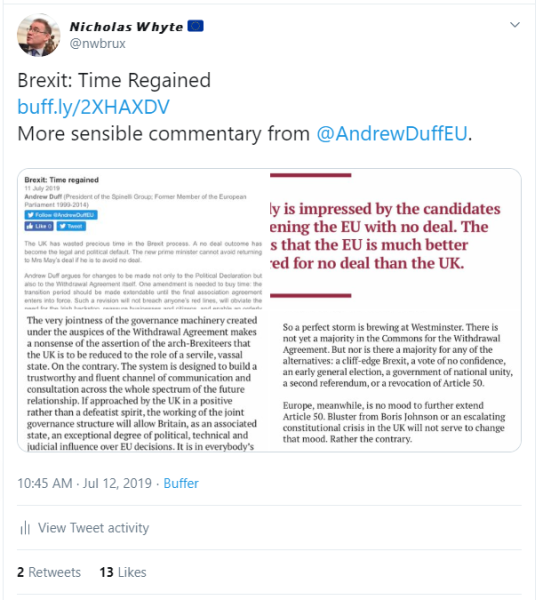 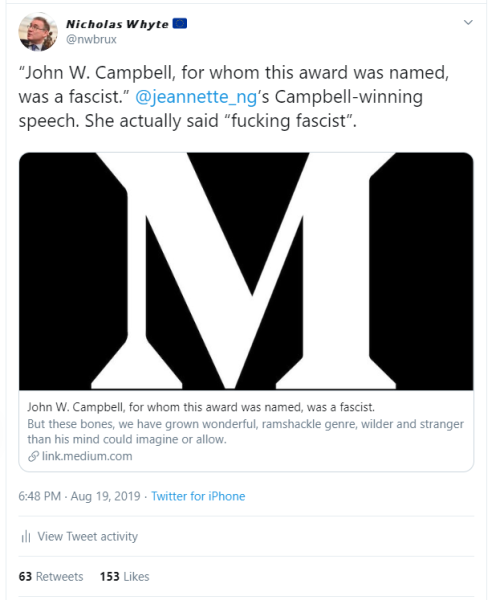 I'm reasonably satisfied with this methodology for counting the impact of my Tweets, and will repeat at the end of the year.
Tags: #terrancedicks, twitter
Subscribe