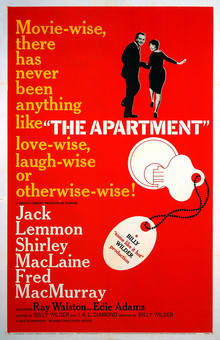 The other films that were nominated for Best Motion Picture were The Alamo, Elmer Gantry, Sons and Lovers and The Sundowners; I have seen none of them. The Apartment ranks second on one IMDB rating of 1960 films and fifth on the other, with Psycho firmly at the top of both lists and the two other films I have seen from 1960, The Time Machine and Pollyanna, below but not too far below. This seems fair to me. Here is a trailer, which rather daringly starts with the final scene of the film:

It’s a comedy by Billy Wilder, but a comedy with some quite dark edges. (I was about to say that it was the only Wilder film to win the Best Picture Oscar; but I had forgotten about The Lost Weekend, which is not a comedy at all.) Our hero, played by Jack Lemmon, rents out his apartment to senior executives in his company for them to meet their lovers; he starts to fall in love with one of the lift operators, but it turns out that she is already having an affair with his new boss (and using his apartment). Hilarity ensues, but it is uncomfortable and sometimes painful, an very well observed. Rather to my surprise, it’s a black and white film - the last to win Best Picture in the twentieth century. It’s a bit surprising to me that black and white lasted so long - colour films have been winning the Oscar off and on since Gone With The Wind in 1939.

I also want to note that this is the first Oscar-winning film to refer to not one but two of its predecessors; at one point Grand Hotel is on television, and there's a passing reference to Wilder's own The Lost Weekend.

We have a few returning actors here who’ve been in previous Oscar winners; Joan Shawlee is Sylvia here, and was an extra seven years ago in From Here to Eternity; Johnny Seven, the brother-in-law who punches Jack Lemmon's character, was one of the longshoremen in On the Waterfront the following year; around the same time, Jack Kruschen, who plays the Jewish doctor in the neighbouring apartment here, was the Hispanic earthling who is the first to be exterminated in The War of the Worlds. While we're on sf, Ray Walston, one of the executives who regularly uses the apartment, went on to become My Favourite Martian. But retuning to Oscar winners, and most notably of all, Shirley MacLaine, who was David Niven's arm candy four years ago in Around the World in Eighty Days, is just fantastic here as the romantic co-lead to Lemmon.

But I am getting ahead of myself. What didn't I like about the film? As usual, I'm afraid, it's whitewashing. There are no African-American speaking parts, in a film set in New York in 1959-60. The only black person we see up close is the boss's shoe-polisher.

After much scrutiny I did spot a few non-white faces in the Christmas party scene; that's as visible as they get.

There is at least a Chinese restaurant with actual Chinese people running it, including playing the music.

Apart from that, I really enjoyed the film. There's a single musical theme, "Jealous Lover", which pops up over and over:
The office environment is brilliantly portrayed as a dehumanised settlement descending into debauchery at festival time (human sacrifices are discussed)

The story itself is an eternal one. I remember once lending my student room in Cambridge to a local friend who wanted to entertain her boyfriend from out of town for an afternoon without her family finding out. (Though I don't think either of them was married to anyone else at the time.) I'm sure many people have had similar experiences, on one side of the equation or the other. The farce element of the plot is entirely generated by Jack Lemmon as Bud, most notably when he takes the blame himself for upsetting Fran to the point of attempting suicide. (As I said before, it's pretty dark.)

Of the lead performances, Jack Kruschen is the most stereotyped as the doctor who despairs of his neighbour's activities. But given the information he has, he is right to be angry; and he carries also a righteous rage against all men who mistreat women.

Still, I was surprised that he got the Best Supporting Actor nomination and not Frank McMurray as Sheldrake the boss, whose cool betrayal of his wife and casual exploitation of Fran (and, it turns out, of many other women) is spine-chilling.

The killer moment is when he offers Fran $100 as a "Christmas present".

Jack Lemmon is always watchable, but he's brilliant here as Bud, the downtrodden bureaucrat who has managed to get ahead by offering a special personal service to his bosses, and is then confronted with the ethical implications of what he has done.

But for my money, the show is stolen by Shirley MacLaine, whose Fran is an adult woman, entirely in charge of her own sexual destiny, who knows perfectly well that she is being exploited by Sheldrake and is working through the consequences for herself. For a comedy, it's a heart-jerking performace. I think it's a lovely touch that the closing scene sees her and Bud edging towards a relationship rather than deeply in lurve.

As I have said, I rather liked this, and I'm putting it well up the list, just ahead of last year's Ben-Hur and behind All About Eve. You can get it here.

For the first time since 1952, eight years ago, this is an original screenplay rather than being based on a book or teleplay. Next up is West Side Story.