The Whyte family connection with the Bastille

Since it's that time of decade again, let's remember my distant relative, Chevalier James F.X. Whyte (also referred to as Comte Whyte de Malleville), who was one of the seven prisoners liberated from the Bastille on this day in 1789. To quote one website:

Whyte was a private prisoner.  He was of Irish Jacobite descent.  He was born in Dublin in 1730  and had served during the Seven Years War, first as a cornet in the Soubise Volunteers then a captain in Lally Tollendal's Franco-Irish regiment.  In 1781 he had suffered some kind of mental breakdown and been confined in Vincennes at the expense of his family.  When Vincennes was closed as a prison in 1784 he was transferred with the marquis de Sade to the Bastille.  In March 1789 he had been declared interdit and control of his property transferred to his two daughters.

Whyte was paraded around the Palais-royal in the evening of 14th and on the 15th taken to the Hôtel de Ville and thence to the prison-asylum at Charenton. On July 31st 1795 he was finally transferred to the asylum of Petites Maisons.  He was described as completely deranged in an almost comically stereotypical fashion,  imagining himself to be Julius Caesar, St Louis and occasionally the Almightly himself...

Whyte was of striking appearance, with a massively long unkempt beard. The English doctor Edward Rigby, who was in Paris at the time of the fall of the Bastille describes in his journal for 15th July a prisoner who is clearly Whyte:  "He was draped in a greasy reddish Cloak - his beard was very long & his Hair which had not been combed during this long Period was grown very long - closely matted together - was divided into two Parts & reached lower than is Knees".  In a letter of Sunday 19th,  Rigby's companion Samuel Boddington notes:  "His beard was of great length and his hair which appeared never to have been combed was entangled in large nets as if it have been wove.  It was parted into two long parts and coming over his shoulders reached below his knees.  His face was ...quite pale, and he looked about him as one should conceive a man to do who for the first time had the use of his eyes."
[George Cadogan Morgan, Travels in Revolutionary France ed. by Mary-Ann Constantine  (University of Wales, 2012), p.17-18.

With his beard, Whyte is a central figure in several illustrations of the taking of the Bastille: 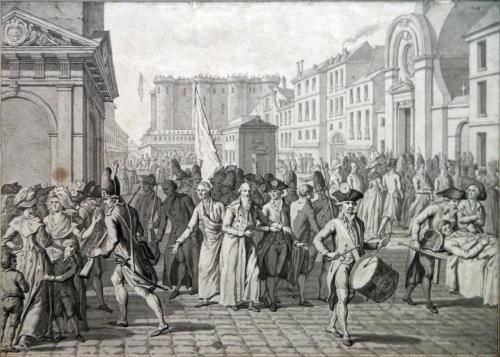 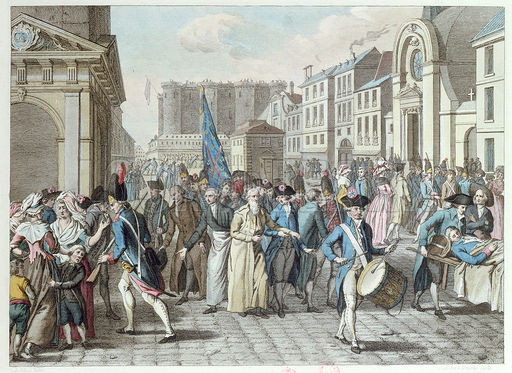 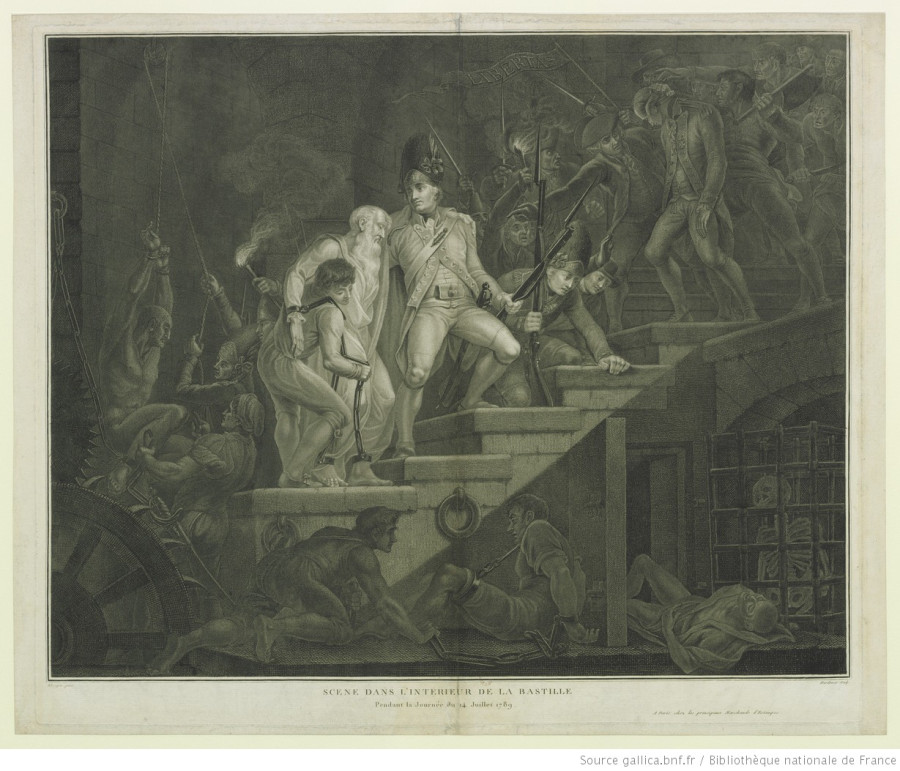 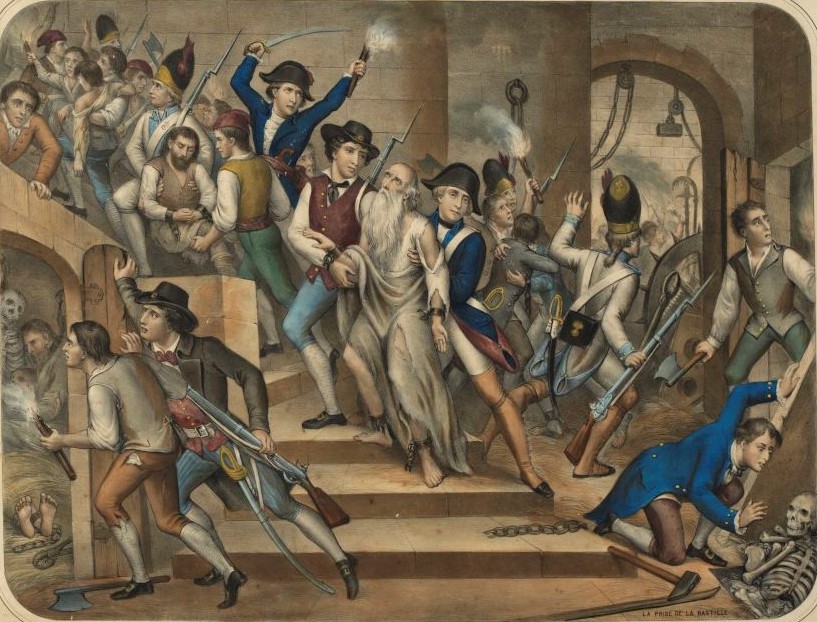 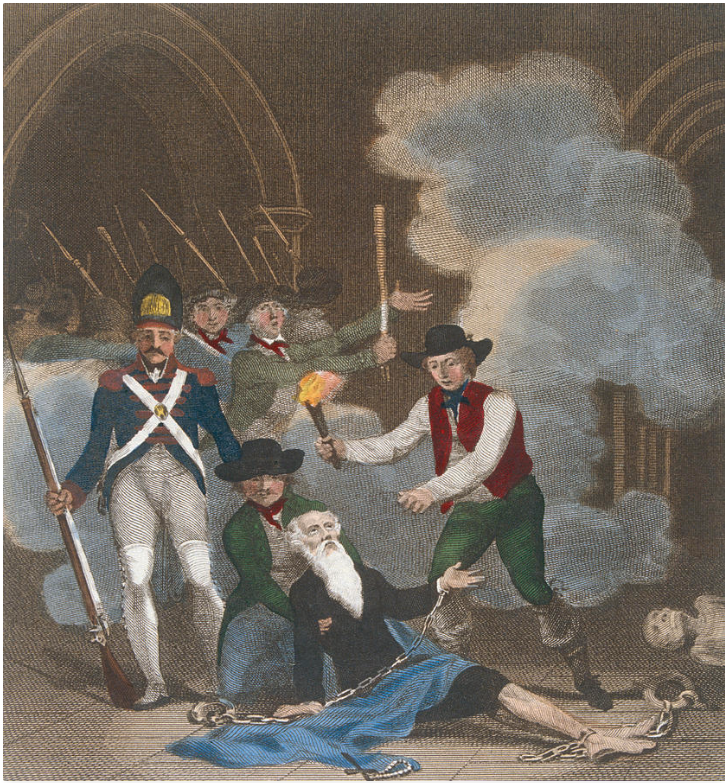 Prisoner Sprung, from the Hulton archive (no attribution given).
Thanks to the History of Maunsell, I think I have worked out the family connection.

I reckon that Chevalier James F.X. Whyte, who is said to have been born in 1730, was a younger son of John White, killed at the Battle of Culloden in 1745; John White's father was another James White, killed at the battle of Villa Viciosa, 1710 (the similarity of names is suggestive); that James White's father was Sir Ignatius Whyte, who was James II's ambassador to The Hague (until the Dutch ruler invaded England and overthrew his boss) and died in 1694; they were not closely related to our side of the family (the mutual male-line ancestor is six generations further back from Ignatius, though there's a cousin marriage in between) but they were socially close, and when Ignatius was proclaimed a traitor at the Tholsel in Dublin in 1691, my 6x great-grandfather Charles White was named along with him (but apparently got the attainder reversed by invoking the Holy Roman Emperor). That side of the family used the title "Marquis d'Albeville", which is pretty close to the reported "Seigneur de Malleville" if you are an 18th-century reporter in a hurry.