When I was young I wanted to be an astronomer. At 16 I proudly got myself elected as the Secretary of the Irish Astronomical Association, which still exists and meets in Belfast. (It had originally been founded in 1946 as the Belfast branch of the Irish Astronomical Society, but had split off in 1974, retaining an all-Ireland perspective.) At 17 I wrote my one and only scientific publication, a review of a book by Patrick Moore (not actually published until two years later). 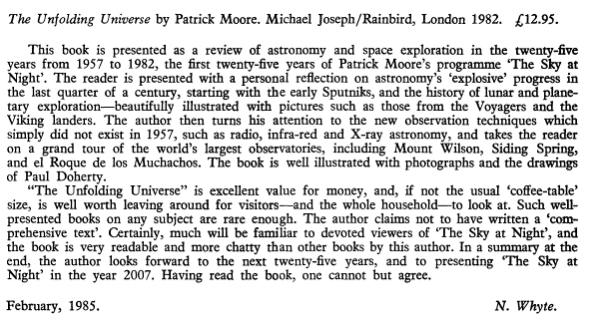 At 18 I spent a few months working at the Armagh Observatory. The duties imposed on me were minimal, but I showed Halley's Comet to visitors through the Grubb telescope. 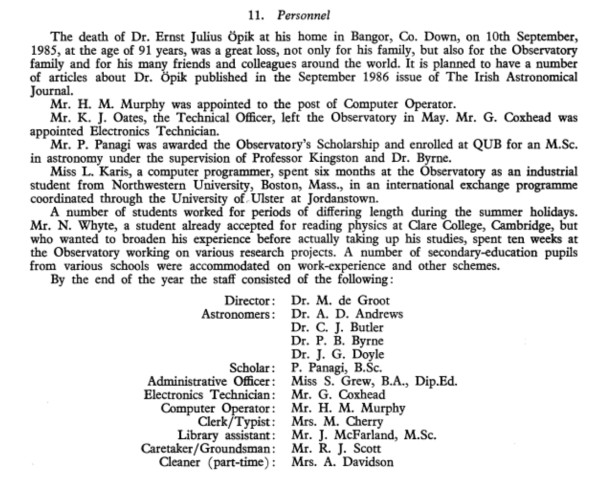 At Cambridge I read Natural Sciences, specialising in my third year in Physics with Astrophysics. I spent the summer before that at the Royal Greenwich Observatory at Herstmonceux, as one of the very last generation of its summer students, where again the duties imposed on me were minimal. It was here that the precarious career structure of the astronomer became clear to me. (Only two of my fellow summer students did become astronomers.)

I read a lot of back issues of the Journal for the History of Astronomy, and realised that I found people more interesting than stars; my academic career diverted into the history of science, and my overall interests veered more and more towards politics.

But I'm glad to have had the astronomical perspective early in my life, and to have been able to scratch that itch.
Tags: life: autobiography
Subscribe