It is election time again! Hooray! And I will be commenting on the @APCOBXLInsider Twitter feed this evening, and on the Northern Ireland counts tomorrow afternoon and tomorrow evening.

I made up my mind some time ago on how I would vote in the European Parliament elections. In terms of how Europe is going to work in the future, the two main European parties, the European People's Party (EPP) and Party of European Socialists (PES) have wedded themselves to the concept of the Spitzenkandidat, where a vote for either of them is a vote for the new European Parliament to force the chosen candidate of the EPP (or PES, if they win more seats, which they won't) onto the EU as the new President of the European Commission. Franklin Dehousse explains here why this is a bad idea in principle (see also Denis MacShane). I'll add that it's a bad idea in practice, as the EPP candidate is the rather unimpressive Manfred Weber, who has never run anything more than the EPP group in the European Parliament. I actually went to the EPP Congress in Helsinki in November to campaign for Weber's opponent:

So far this morning three different people have recognised me and said to me, “What are you doing here???” I would have thought it’s pretty obvious what I’m doing here. (Thanks to @alexstubb for photo.) pic.twitter.com/Pe17UT4wiO

The liberal ALDE party are running a team of potential EU leaders, a majority of them women, and starring the impressive Margrethe Vestager as well as the incredible Emma Bonino. I'm not especially a fan of former Belgian Prime Minister, now ALDE group leader, Guy Verhofstadt, but a vote for his party in the EU election is a vote against the Spitzenkandidat system and also a vote for Vestager - yes, I'm aware that's contradictory, but both statements are still true.

In Belgium we have open lists so you get to choose the candidate as well as the party. Scanning down the Open VLD list, I came across Stéphanie Anseeuw, from the far west of Belgium; the Open VLD profile doesn't mention it, but she uses a wheelchair, and during her term as senator successfully brought in legislation to enable swifter official recognition of disability. She gets my vote for Europe, though I'm under no illusions that she stands much chance, in 8th place on a list where her party is generally expected to drop at least one of their three seats.

That still leaves the Belgian federal and Flemish regional elections, in which I must vote today, since I have been a Belgian citizen since 2008 and voting is compulsory here. Rather to my surprise, I have to report that we have received election literature at this house from all parties except Open VLD, for whom I actually voted in the municipal election in October and who as noted above are getting my support at European level today. I'm certainly not voting for the anti-immigrant Vlaams Belang (formerly Vlaams Blok), and nor am I voting for the right-wing NVA, who collapsed the previous government over their refusal to sign the UN Marrakesh Global Compact on Migration. Otherwise I'm really rather at sea on this, and fortunately every media outlet has its own online survey - stemtest in Dutch - to help you decide which party fits your views best.

One issue that I care rather passionately about is migration, where I am a leftie libertarian - I want movement between countries to be as easy as possible and I hate it when my adopted country is nasty to people who have already gone through hell. (It's really telling that one of the questions you are invited to answer is "should the children of unsuccessful applicants for asylum be locked up?") Het Nieuwsblad has broken its stemtest into three different policy areas, and on migration I am basically a Trotskyist, aligned with the far-left PvdA. 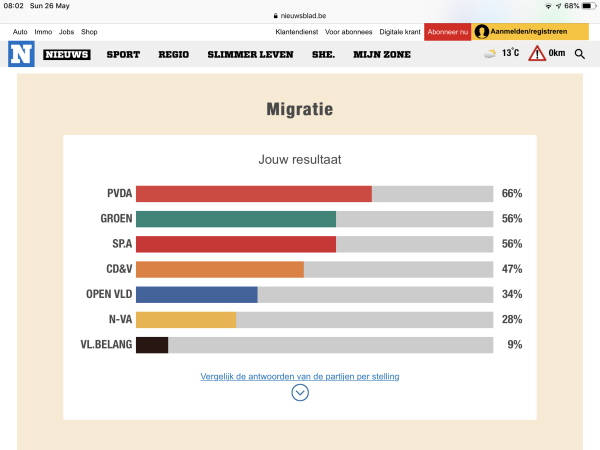 On economic issues, however, I'm more centrist, with the Christian Democrats just ahead of the Left, and the Right further behind. I suspect that we are rather unusual among higher income earners in that our family gets a lot more value back from the Belgian state than we pay in taxes. 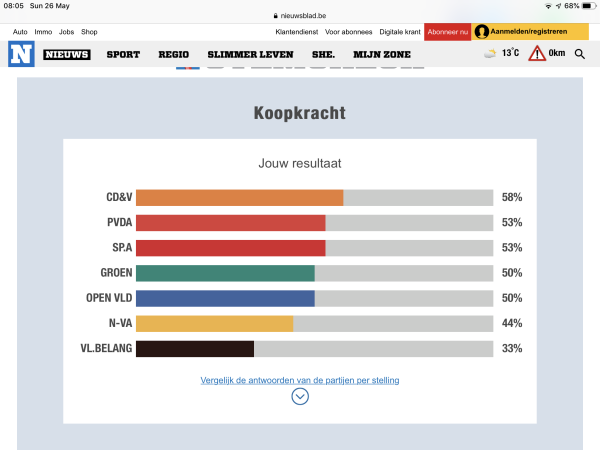 On climate, the Christian Democrats are level-pegging with the Greens at the top of the chart. I suspect the Greens would have scored better if it weren't for my instincts on keeping nuclear power plants open for a bit longer. Open VLD and SP.A score particularly poorly here. 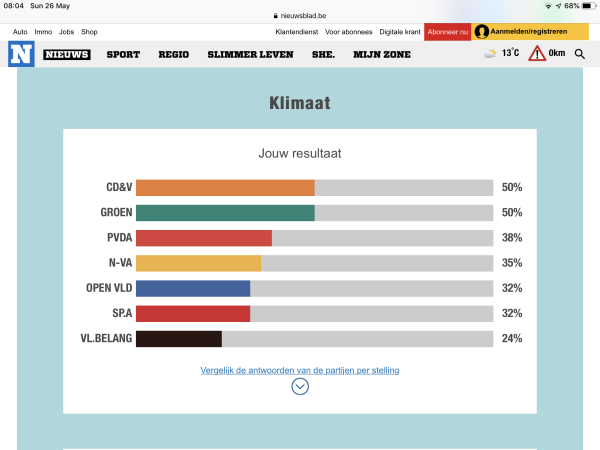 De Morgen has had the idea of doing a stemtest that actually checks the past voting records of the parties against your policy preferences. I found this particularly interesting precisely because it's not actually all that helpful; it unwittingly emphasises how close the parties are - of the 22 questions I cared enough about to answer, two parties (the centre-left SP.A and centre-right liberal Open VLD) both agreed with me on 14, and the Christian Democrats and Greens agreed with me on 13; which the far-left PvdA are with me on 8/13 questions relevant to the federal level which is the only one they are contesting. Even the rabid right are only a couple of questions further away from me, on 11 each. 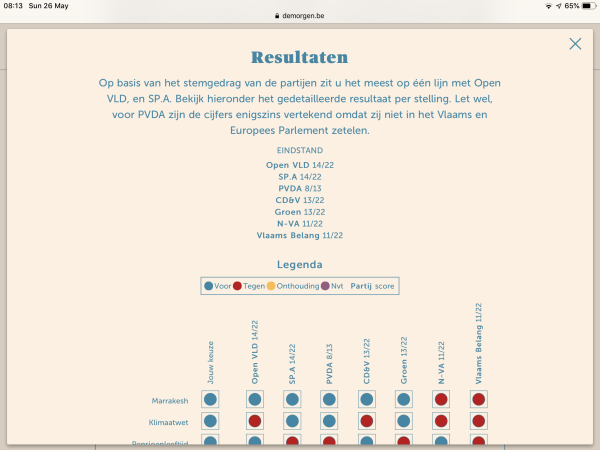 The EUandI survey, developed internationally, has (it claims) a standard set of questions which apply across the EU. It thinks I am a leftie, balanced between Groen and SP.A: 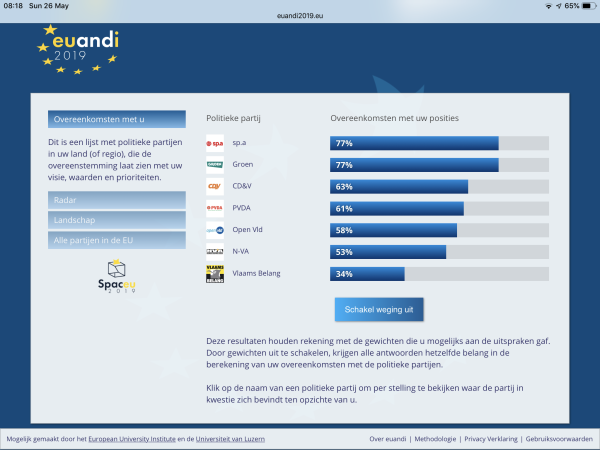 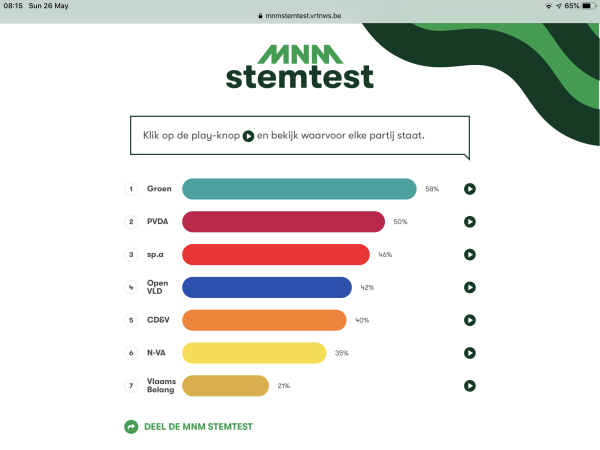 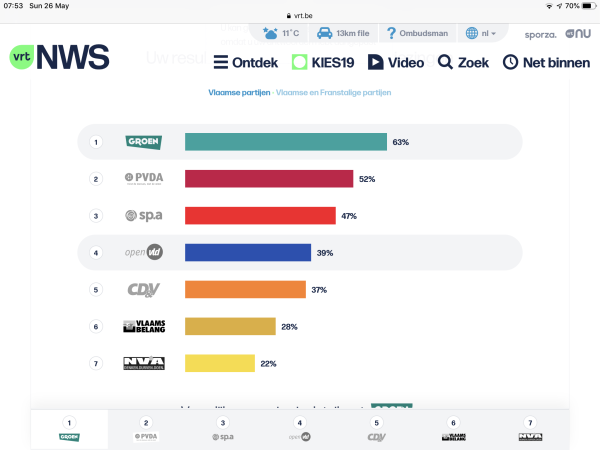 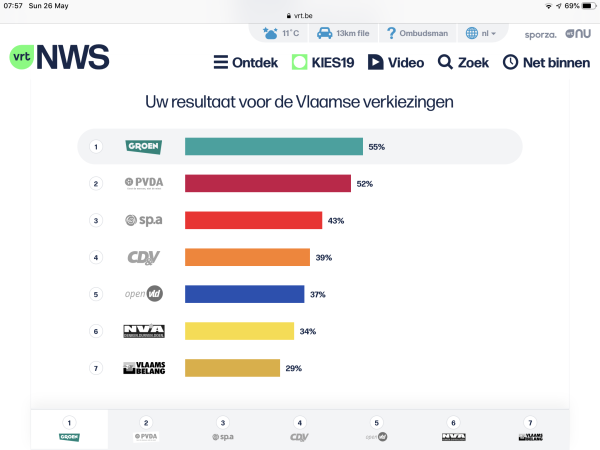 Finally, Het Laatste Nieuws has a nice gimmick where it tells you which candidate you are supposedly most aligned with - of course, this is really a proxy for the party whose list they lead, but it humanises the process a bit. HLN thinks that I am closest to the Green politician Stijn Bex, who I cannot vote for because he is a candidate for the Brussels regional parliament. Interestingly, they seem to have omitted Open VLD - perhaps they too didn't get any election literature? Anyway, taking all of the above into aggregate and running a quick and dirty Condorcet count on the various options, it was pretty obvious which way I would vote. This time.

PS - and then it turns out that an old friend is on the Green list of substitutes for the Flemish parlimanet, so I happily gave her a preference.
Tags: world: belgium
Subscribe