Around The World in 80 Days won the Oscar for Best Motion Picture of 1956, and picked up another four, Best Cinematography, Color (Lionel Lindon), Best Film Editing (Gene Ruggiero and Paul Weatherwax), Best Music, Scoring of a Dramatic or Comedy Picture (Victor Young) and Best Writing, Best Screenplay, Adapted (John Farrow, S. J. Perelman, and James Poe). It was also nominated in Best Art Direction-Set Decoration, Color; Best Costume Design, Color; and Best Director. Interestingly, none of the actors was nominated despite the all-star cast. The other contenders for Best Motion Picture that year were The King and I (which I have of course seen) and Friendly Persuasion, Giant, and The Ten Commandments (which I haven't). 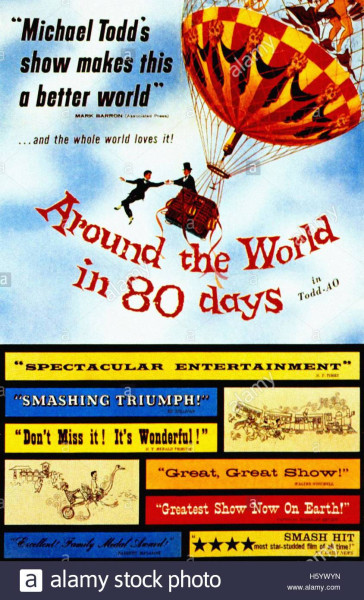 IMDB users rank Around The World in 80 Days 14th or 10th of the films of 1956. Ranked ahead of it in both cases are: The Ten Commandments; The Killing; The Searchers; The King and I; The Man Who Knew Too Much; Forbidden Planet; Invasion of the Body Snatchers; and Giant. Of those, apart from The King and I, I have also seen Forbidden Planet. The only other 1956 film I think I have seen is Moby Dick. It's a pretty good year; I liked all of them. Here's a contemporary trailer.


I thought this was generally very good fun. In case you didn't know, it's the story of a chap called Phileas Fogg in 1872, who bets his London clubmates that he can travel around the world in eighty days. He brings with him his recently hired manservant, Passepartout, and also acquires en route an Indian princess who he saves from suttee and a detective who suspects him of bank robbery. The journey gives the excuse for lots of brief portrayals of exotic settings, both in the original 1872 book and spectacularly in the 1956 film. It's not a deep film, but it's very entertaining. I'm a bit of a fan of David Niven anyway, having greatly enjoyed his two autobiographies which I read as a teenager. I've also loved the book since I was a child.
As usual I'll start with the bits of the film I didn't like so much.

Whitewashing: as usual, I'm afraid. The lead female role is the Indian princess Aouda, played by the thoroughly Caucasian Shirley MacLaine (aged 22, in her third film). Though, of course, even in the original book we are told on first seeing her that Aouda is "as fair as a European".

The film can hardly avoid Asian characters in the Indian, Chinese and Japanese segments - though of the credited actors, Robert Cabal, of European and Polynesian heritage, plays the unnamed Indian elephant driver; Philip Ahn, a Korean, plays a passer-by in Hong Kong). But there isn't a single sub-Saharan African or African-American visible anywhere. (It is implied that Achmed Abdullah, whose  is North African; he is played by the Mexican Gilbert Roland.) It's striking that in the scenes set in San Francisco, there is not a single non-white face to be seen - not in the election parade that starts this section of the film, not in Clancy's saloon. The book, on the other hand, singles out Chinatown as one of the sights of San Francisco, and mentions that the hotel waiters were "negroes of darkest hue" - which is not brilliant, but in the film they are not there at all.

Stereotypes: Of course this is a film which relies on stereotypes for the humour of its (Oscar-winning) script, as indeed did the book. The French of the 1870s and the Americans of the 1950s are alike in finding English reserve and snobbery alien and mockable (and an excuse to look at someone else's failings). I found it striking just how closely the film stuck to the book in this regard (with a couple of big additions, which I will get to, and the deletion of the scene with the Mormon preacher, which would have been less funny for 1950s Americans than for 1870s French readers). Oddly enough the weak point here is David Niven, who was a naturally warm and slightly vulnerable actor, and could not really carry off the impervious, on-the-spectrum Phileas Fogg.

The film does lampshade this, of course. In the closing seconds, Aouda appears at the Reform Club.

Fogg: My dear, I must ask you to leave these precincts at once. No woman has ever set foot in the club.
Aouda: Why not?
Fogg: Because that could spell the end of the British Empire.

(various crashes as Passepartout arrives through the window.)
The Governor of the Bank of England [Robert Morley]: This is the end.
(closing titles.)

Music: It's inoffensive (though Oscar-winning) stuff, the catchy theme tune being a minor hit with the instrumental version from the film on the A side and Bing Crosby crooning it on the B side. Rule Britannia is of course the theme for the British sections, but I was very amused that the French sections raid Gershwin's An American in Paris - no doubt from the film that had won the Best Picture Oscar only five years before.

Cast: There are 1302 named actors here. The number of cameos is breathtaking. You may have already spotted Marlene Dietrich running the San Francisco saloon. Here's Noel Coward (who wrote the 1932-33 Best Picture) and John Gielgud as the head of an employment agency and Phileas Fogg's recently sacked manservant.

Here's Buster Keaton as the train conductor in the Wild West.

I am not enough of a film buff to really appreciate them all, but it's a remarkable array.

I think it's also unfair that none of the cast were nominated in any of the acting categories. Cantinflas in particular shines as Passepartout (and was apparently given top billing, ahead of Niven, in Spanish-speaking countries where he was better known).

I do I'm afraid have my issues with Robert Newton, who is a bit too chunky for the cadaverous Inspector Fix (and of course died of alcoholism several months before the film was actually released).

Spectacle: The whole thing looks fantastic. The two early inserted sequences, not in the original book, are the balloon out of Paris and the bullfight. The balloon is utterly gratuitous to the plot, but allows the film to be in Paris and to have some amazingly well contructed shots. It's a gorgeous sequence. (Of course, real balloonists would have needed to be more warmly dressed.)

Bullfighting is of course a terrible thing, but the point was that Cantinflas had actually been a bullfighter and was able to pull it off.

I've mentioned the establishment shot of San Francisco already. Everywhere is convincingly portrayed, the American bits best obviously. Passepartout is rescued from the Indians off-screen in the book but on-screen in the film:

And I had totally forgotten about the wind-propelled railcar in the book, which again looks great on screen.

This was very enjoyable. I'm putting it a quarter of the way down my list, just below All About Eve and above From Here To Eternity. You can get it here.

Next up is Bridge on the River Kwai, which is also based on a novel originally written in French but is a lot less funny.

This is of course not the only adaptation of Verne's novel for the screen, though it is probably the best. You may remember the 2004 version with Jackie Chan getting top billing as Passepartout and Steve Coogan in second place as Fogg, also featuring Jim Broadbent as a villainous Lord Kelvin and Arnold Schwarzenegger as an Oriental prince. It varies just a little further from the book than the 1956 version did. Here's a trailer:


Those of you who go back as far as I do may recall an Australian animated series in which Fogg is proving himself worthy of the love of Belinda, and Fix is an agent of his potential father-in-law. This opening sequence may jog your memory.


Back to the original novel, then. Second paragraph of third chapter:It's striking that both "Reading sauce" and "mushrooms" are in English in the original French text. I can understand there not being a French equivalent for the former, but what's wrong with "champignons"?

I last re-read the book in 2004, fifteen years ago, and wrote this:

After watching the dismal Steve Coogan/Jackie Chan film on the plane a couple of weeks ago, I realised I had the novel on my PDA and decided to re-read it. And, well, it's good. There's a little bit of the nerdishness recently satirised here, in that every means of transport is described in total detail. There are one and a half total implausibilities in the plot. But basically, this is a story of its time, full of the new wonders available in 1872 - the Suez Canal had been open for only three years, so had the rail link across the United States,and of course the whole point of the book is that the railway across India opened only that year. And this is an India only fifteen years on from the 1857 Mutiny - as far as we are from the fall of Communism; a Japan that has just experienced the Meiji restoration; a United States recovering from the Civil War, and doing its best to deal with the Mormons. And of course this is written by an author whose own native France has been devastated by a catastrophic military defeat the previous year, and is a determined attempt to look outwards and forwards.

The half implausibility I mentioned above is this. The whole basis of the story is that as a result of the trans-Indian railway being completed, our hero, Phileas Fogg, makes a bet that he can go around the world in eighty days. Well, when he gets to India, it turns out the railway hasn't been completed; and he has to complete the rest of the journey by elephant, rescuing the beautiful Aouda on the way. Now come on; the whole basis of the bet was that the railway was there, and surely the gap between Kholby and Allahabad is sufficient cause to call the bet off?

The complete and total implausibility is the punchline of the entire book, where we are asked to believe that in the course of 26 days travel between the International Date Line and London, none of our leading characters had actually checked the date and realised that they were a day ahead of themselves. So they saw no newspapers and experienced no weekends in America or between Cork and Dublin or Liverpool and London; and the schedule of steamers in New York and railways in Ireland and England was utterly insensitive to the day of the week? Come off it! Of course the plot simply doesn't work unless you are prepared to overlook this gaping hole in it, and most people do.

And how come all the bells in London strike at ten to nine anyway? Philip José Farmer had an explanation of this in The Other Log of Phileas Fogg, an otherwise completely forgettable effort. Apart from the points noted above, this is really fun and everyone should read it.

Re-reading it now I was even more struck by the cutting-edge aspects of the text. "Bungalows" are exotic buildings found only in India. The (American) Indian raid on the railway train is a cliche of the Western genre which had only recently come into existence (the dime novels Malaeska and Seth Jones both first appeared in mass circulation in 1860). I guess balloons out of Paris were still a painfully recent memory, or Verne would probably have put one in. It's a short book with lots of fun spectacle. You can get it here.