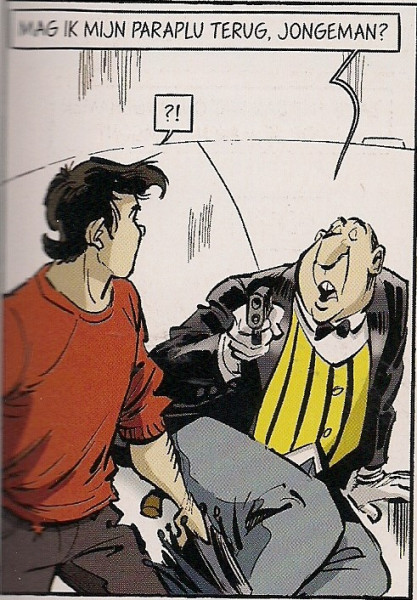 Flemish FNAC customers voted this as their favourite comic of 2014, but I think it would be pretty impenetrable if you weren't at least vaguely familiar with Suske and Wiske, and also with the previous three volumes of the series. Here, Lambik, Suske and Wiske's adult friend from the present day, zooms forward to the year 2047 to try and save them from the evil Krimson and other dangers. He runs afoul of the mysterious deaf girl, Jérusalem, who is becoming a much darker and more dangerous figure (and darkening the story as a whole). Lambik actually attempting to be useful for a change, but being thwarted by external factors and by his own character flaws, turns out to be quite an effective story. Otherwise the rest of the plot doesn't advance all that much, and I'll just have to go out and get the last two volumes. You can get this one here.

Meanwhile my next non-English comic will be De Terugkeer van de Wespendief, by Aimee de Jongh.