Casablanca, and Everybody Comes to Rick's

Hooray! My run through the winners of the Oscar for Best Picture has brought me to what was already a favourite, Casablanca. It won the Oscar for Outstanding Motion Picture of 1943 (despite December 1942 general release). It got a total of eight Oscar nominations, winning also Best Director and Best Adapted Screenplay, a total of three. 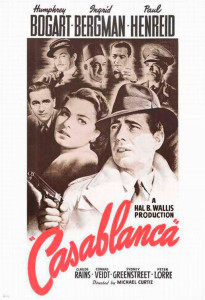 Both IMDB ratings have Casablanca as the top film of 1942 (here and here), with Bambi second. For the Oscars, it was in contention with 1943 releases, for which IMDB voters rank Hitchcok's Shadow of a Doubt top under both systems. I don't recall seeing a single other 1943 film. (I guess I'll be fixing that when it comes time to watch next year's Retro Hugo nominations.)

You've probably seen it already, and if not, you really should.

I'm not going to run through my usual litany of things I liked and didn't like (well, OK - one rather negative point is that for a film set in Africa, there are not a lot of actual Africans visible). I think it's terrific in portraying a mood of desperation in Europe at the brink of totalitarian domination; of course by the time the film came out, the war had reached a turning point with the Allied conquest of North Africa, Guadalcanal, and the beginning of the slow agonising crumbling of the Eastern Front, and the story is one of maintaining morale for a long fight that is at least going in the right direction. It's still brilliantly set up as good vs evil, with only Major Strasser firmly on the evil side; Renault is a bad man, but opts for good in the end. 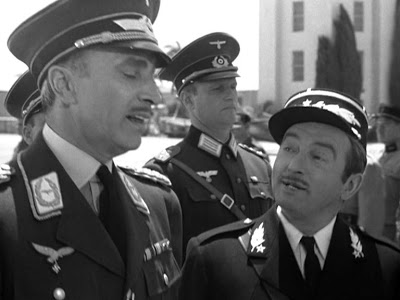 Ingrid Bergman really glows. Part of the reason for this, I realised from TV Tropes (which is an excellent resource) is that she is often slightly out of focus, which makes her seem more luminous and attractive. I think that hers is the standout performance. 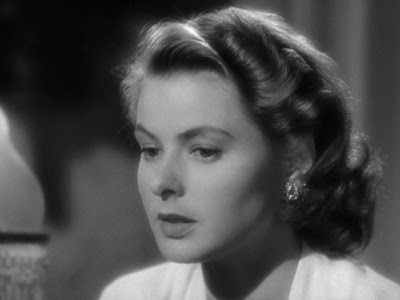 Bogart of course dominates the film, and has a much more credible character arc from defeated cynicism to newly rediscovered idealism than most movie protagonists do. 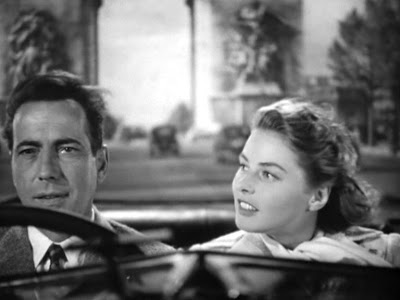 And the script! I'll have more to say about this below, but it's not surprising that this film got more coverage than any other in the American Film Institute's list of the hundred most memorable lines in cinema. (It got six: "Here's looking at you, kid"; "Louis, I think this is the beginning of a beautiful friendship"; "Play it, Sam. Play 'As Time Goes By'"; "Round up the usual suspects"; "We'll always have Paris"; and "Of all the gin joints in all the towns in all the world, she walks into mine.") And there are some memorable exchanges as well.

Captain Renault: By the way, last night you evinced an interest in Señor Ugarte.
Victor Laszlo: Yes.
Captain Renault: I believe you have a message for him?
Victor Laszlo: Nothing important, but may I speak to him now?
Major Heinrich Strasser: You would find the conversation a trifle one-sided. Señor Ugarte is dead.
Ilsa: Oh.
Captain Renault: I am making out the report now. We haven't quite decided yet whether he committed suicide or died trying to escape.
Captain Renault: I've often speculated why you don't return to America. Did you abscond with the church funds? Run off with a senator's wife? I like to think you killed a man. It's the Romantic in me.
Rick: It was a combination of all three.

Rick: How can you close me up? On what grounds?
Captain Renault: I'm shocked! Shocked to find that gambling is going on in here.
[a croupier hands Renault a pile of money]
Croupier: Your winnings, sir.
Captain Renault: [sotto voce] Oh, thank you very much.
[aloud]
Captain Renault: Everybody out at once.

The scene that always gets me is the battle of the anthems, when Laszlo interrupts Die Wacht Am Rhein with the Marseillaise; I can't watch it without sobbing. The emotional charge no doubt comes from the fact that at least ten of the speaking characters actually were played by refugees.


This all may help explain why it is quite so powerful:


Well, this is going right to the top of my list of Oscar winners. I don't know if anything will come close.

Now, it's generally forgotten that Casablanca was actually based on a play, Everybody Comes to Rick's, by Murray Burnett and Joan Alison. The play had not been produced before the studio bought it, but it has been staged a couple of times in recent years. Here is the opening of the third scene (Act 2 Scene 2):

Place: The bar of Rick's Cafe.
Time: That evening.
Once again we see Rick's as it was in Act 1, Scene 1.
The room is brilliantly lit. There is laughter and chatter, but it is earlier in the evening than in the first act, and tho place is not so crowded.
The RABBIT is sitting at the piano, attired as he was in the first act, playing and singing softly. Rick's table is unoccupied, but there is a reserved sign on the other left front table as usual. The RABBIT is obviously nervous and distrait. He continually glances at the door, and then mops his head with a handkerchief. Shortly after the CURTAIN RISES, the door opens and RICK, haggard and worn, enters. He is dressed as we last saw him, and his costume is incongruous in this gathering. The RABBIT immediately leaves the piano and goes to Rick, RICK pats him on the shoulder, and takes a drink at the bar. The RABBIT evidently wants to talk but RICK shoves him toward to piano, and climbs the stairs behind the bar. The RABBIT shakes his head worriedly, and returns to the piano. Shortly after RINALDO, also attired as he was in Act One, Scene One, enters. He glances around, openly searching for Rick, but upon failing to find him, goes to the piano and the RABBIT stops playing.
Rinaldo: Good evening, Rabbit.
Rabbit: Evening, Captain Rinaldo.

The similarities, especially near the beginning, jump out at any reader who knows Casablanca - some of Burnett and Alison's lines survived unchanged to filming, which makes it a bit rough that they did not share in the Oscar for the screenplay. "As Time Goes By" was theirs. So were "Play it, Sam"; "We'll always have Paris" and "Of all the gin joints in all the towns in all the world..." At the same time, the film is a considerable improvement on the original. The battle of the anthems is there, but on stage the Germans are allowed to finish singing rather than be interrupted.

The character of Sam is crucially upgraded in the film as well. It's odd, because of all characters his lines are possibly least changed (well, him and Ugarte); but the fact that he is just called "the Rabbit" in the theatre script and speaks in dialect is pretty demeaning. Dooley Wilson invests the part with considerable dignity, but so do the other actors.

Even more crucially, the female lead of the play is not a twenty-something Scandinavian but a thirty-something American, Lois Meredith, who got to know Rick in Paris in 1937 when both were cheating on their respective spouses; she has now ended up with Laszlo, and explicitly sleeps with Rick to try and get the letters (whereas we are left wondering a bit about Ilsa in Casablanca). Laszlo too is less heroic, his dispute with the Germans being about money as much as politics. Luis Rinaldo (rather than Louis Renault) and Rick himself are also much less attractive characters; it's difficult to care as much about what happens to them as to their film counterparts. Also - complete spoiler - at the end, though Lois and Laszlo make their getaway, Strasser is not shot but instead arrests Rick for helping them escape, which makes one wonder what the point was.

It's a bit cruel to say (as one critic did) that Everybody Comes to Rick's is the worst play ever written, but it certainly isn't up to the mark of its descendant. If you want to judge for yourself, you can download it from here.

My next Oscar-winner is Going My Way, of which I know nothing more than that it is a musical starring Bing Crosby.