Gone With The Wind

Gone With The Wind won the Academy Award for Outstanding Production of 1939; for once, I have actually seen two of the other Best Picture nominees, Ninotchka and of course The Wizard of Oz. It won another seven competitive Oscars and two honorary ones, a sweep that was not exceeded for decades. I have actually seen two other 1939 films, which makes this by far my best year up to now - back in the early 1980s the BBC showed the Basil Rathbone The Hound of the Baskervilles and the less memorable The Adventures of Sherlock Holmes. 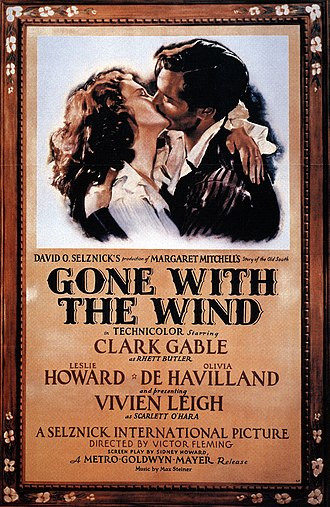 IMDB has this at the top of its 1939 list on one system, The Wizard of Oz winning on the other. Adjusted for inflation, Gone With the Wind is the top-grossing film of all time (narrowly ahead of the original Star Wars), and also apparently holds the record for cinema tickets sold in (at least) both the USA and the UK. (I can’t find figures for Ireland. Incidentally, the first ever cinema in Ireland was owned and operated by James Joyce, subsequently better known for other things.) Here's a trailer.

I’m going to note here a couple of actors who are back again from other recent Oscar winners. I’ll get to Clark Gable later, but here’s Eddie Robinson as Scarlett’s aunt’s enslaved coachman, having been Rheba’s boyfriend Donald in last year’s You Can’t Take It With You. They have tried to age him up, not with total success. 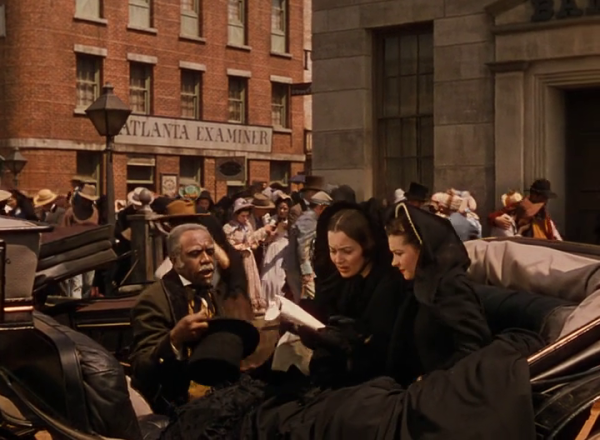 And here’s Henry Davenport as Dr Meade, having been the night judge in You Can’t Take It With You and also the Chief of Staff of the French army in The Life of Émile Zola. I don’t know if there are other actors who managed to be in the Best Picture winner in three or more successive years; I’ll keep counting. 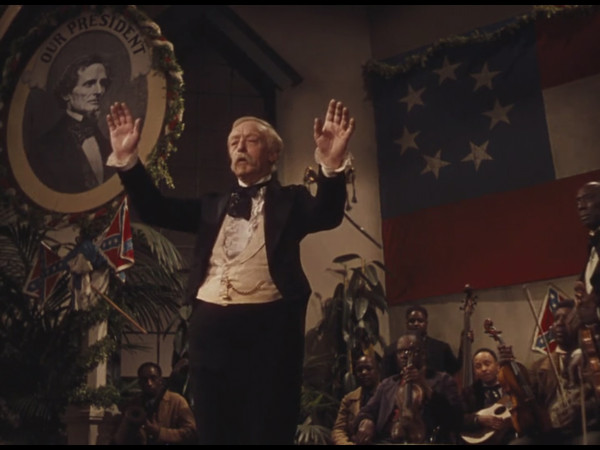 To get the most important bit out of the way: Gone With The Wind is racist and gives a positive account of slavery. This is made absolutely clear with the film’s opening statement. 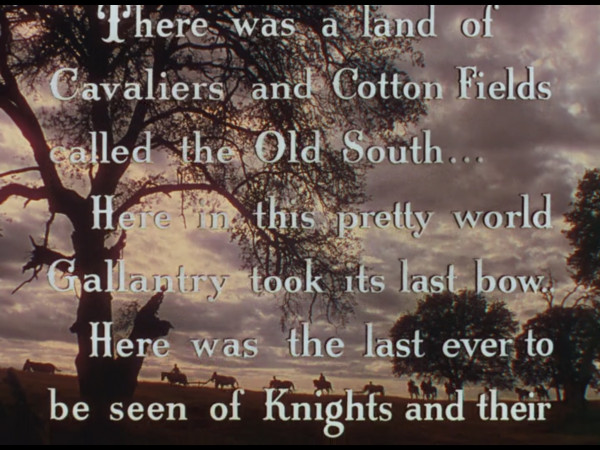 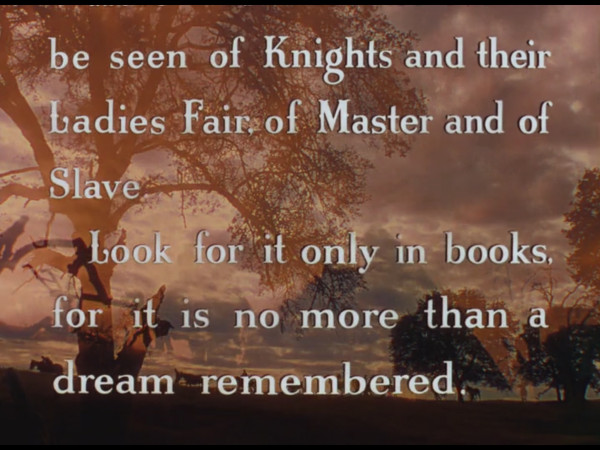 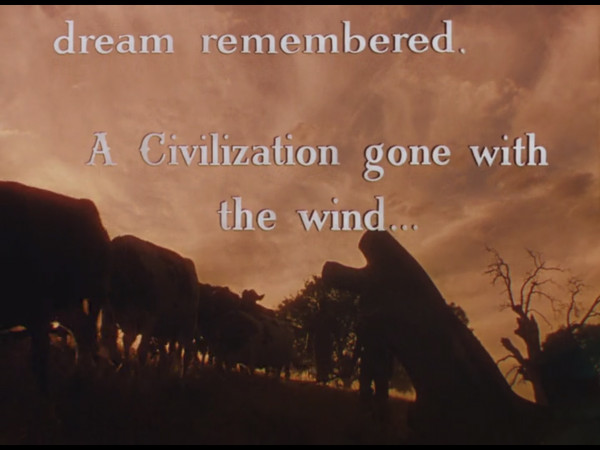 The war is entirely portrayed as a struggle to preserve a whole romantic and chivalrous way of life, which is doomed because of its failure to invest in its own defence. Both Rhett Butler and Ashley Wilkes spot early on that the war will be lost; nobody ever states out loud that the reason for the war was slavery. All the Northerners are bad guys. All the black characters are happy in their relationship with their white masters. Most of them are disarmingly stupid (a particular shout to Butterfly McQueen, who must have been gritting her teeth as she delivered Prissy’s lines). 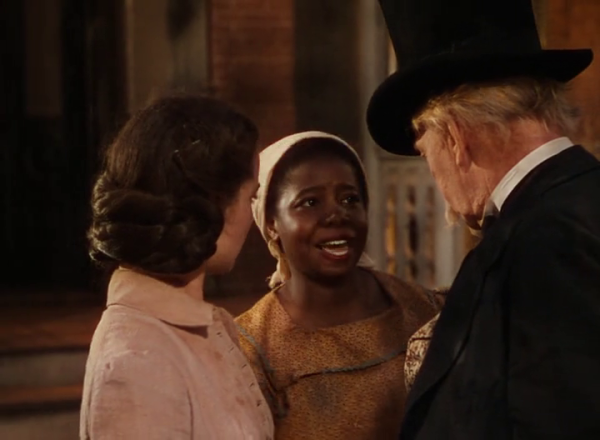 Apparently the NAACP were consulted on the script, and advised against the use of the word “darkie” instead of “nigger” and that the Ku Klux Klan should not be explicitly referenced (as they are in the book), so it could have been even worse. And also on the plus side, Hattie McDaniel was the first ever black actor to win an Oscar for her performance as Mammy, though she was of course excluded from the film’s launch in Atlanta and the role itself is not exactly liberating. 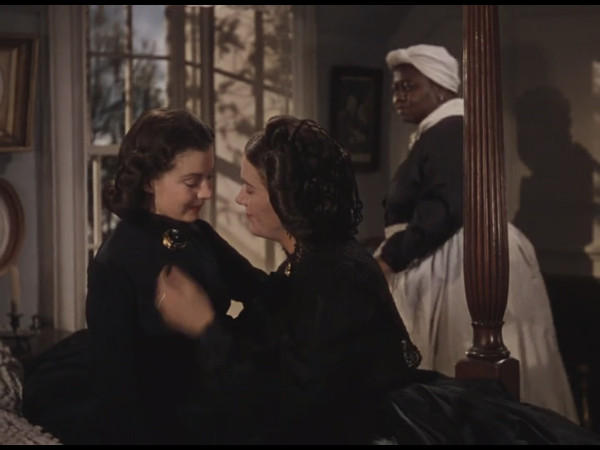 The second worst thing about the film is that it is simply too long. The book was of course hugely popular, and its many fans would have wanted servicing. Six of the twelve early Oscar-winners I have seen so far were based on books and another on a short story (two of the other five were adapted from stage plays, the remaining three were original material). Gone With The Wind deviates least from the printed original, and is the poorer for it. Its very length was part of the reason for its fame, of course, but it could easily have lost an hour and been better. The first half has a tremendous impetus as the Old South disintegrates, but once the war is over, the narrative thrust has gone, and we slip into a series of somewhat disconnected episodes from post-war life, ending with Rhett’s dramatic rejection (which one can anticipate from his very first scene). I think the last scene misses the target; surely Rhett has made the right decision, to leave Scarlett, and her fantasy that she can get him back (after their atrocious behaviour to each other during the marriage) is indulged a little too much. 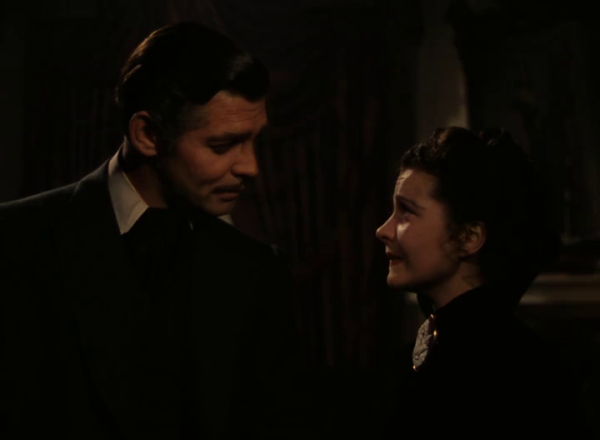 The incidental music is great, but again just a little too much - I watched the full version with overture, intermission and end music, and actually the overture is a bit of a disappointment as overtures go.

Like Cimarron, we have the interesting case of a text that is racist but also somewhat feminist. A lot of this is tied up in the character arc of Scarlett and her three marriages. She starts the film as a very silly teenager, with an appalling crush on poor Ashley, who marries someone else on a whim (and is quickly widowed). But at the halfway mark, she transforms herself into a powerful economic operator in her own right, and it is here that she is at her most sympathetic - she depends on her second husband’s money to start her business, but it’s absolutely clear that she is the one making the decisions. Then the arc curves down again when she finally gets together with Rhett and it doesn’t work out; and at the end she is fantasising about his return to a marriage that she herself was never fully committed to. Basically, she does better, and the audience is encouraged to identify with her more, when she is not being hassled by the men who have led her society to war and disaster. Sure, a lot of the other women characters are stereotyped, but most of the men are gallant cardboard cutouts as well. And anyway Scarlett’s story is the story; one of IMDB’s glorious factoids is that Leigh’s 2 hours, 23 minutes and 32 seconds on screen is the longest ever performance to win an Oscar. (She was the second youngest winner of Best Actress at the time, and is still the tenth youngest out of 90.) 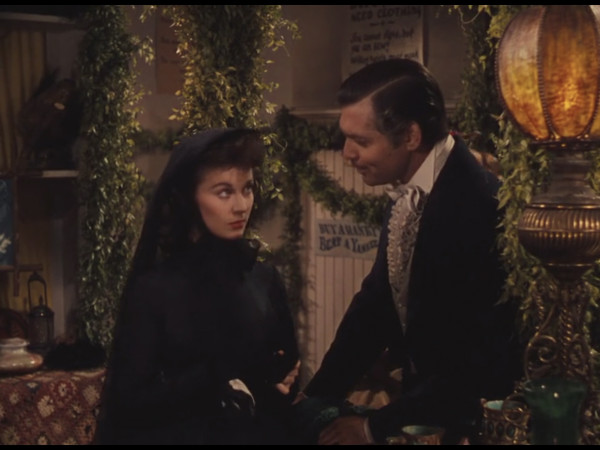 And that brings us to the one of the film’s core strengths: the very watchable smouldering chemistry between Vivien Leigh as Scarlett and Clark Gable as Rhett. (Some credit for this also belongs to the script, which was attributed to Sidney Howard who won an Oscar for it; sadly he was killed in a farming accident before shooting even started.) We’ve had Gable twice before, in It Happened One Night and Mutiny on the Bounty, and he was good in both of those, but he is excellent here, as a rogue who rises to the occasion when challenged. Here he has very strong support from Leslie Howard as Ashley and Olivia de Havilland as Melanie. 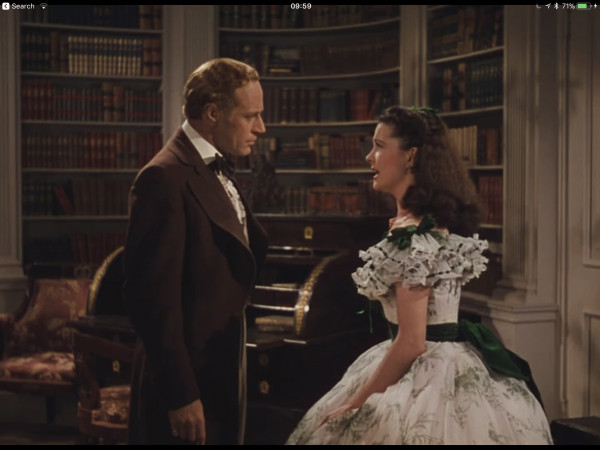 We should shout out to Olivia de Havilland, who at the age of 101 is the only surviving lead from any Oscar-winning film of the 1930s. 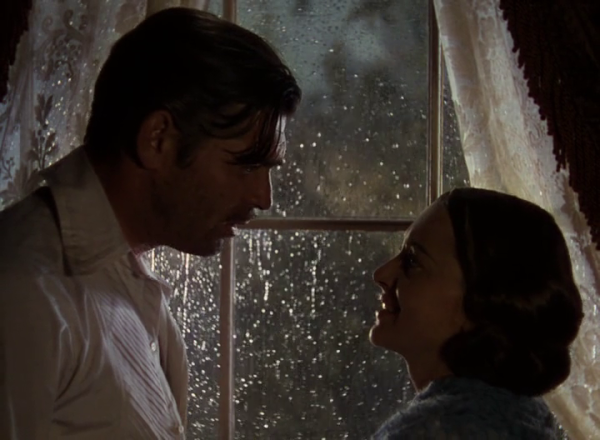 I have a couple of quibbles - Leslie Howard, at 46, is really too old to be Ashley, supposedly one of the neighbourhood kids, not much older than Scarlett (who is explicitly sixteen at the start of the film); he is also way too English, and indeed the white Southern characters generally fail to have very Southern accents. This is the one scene where all four leads appear together, when the women are tending Ashley after Rhett has brought him back from the definitely-not-Ku-Klux-Klan raid. 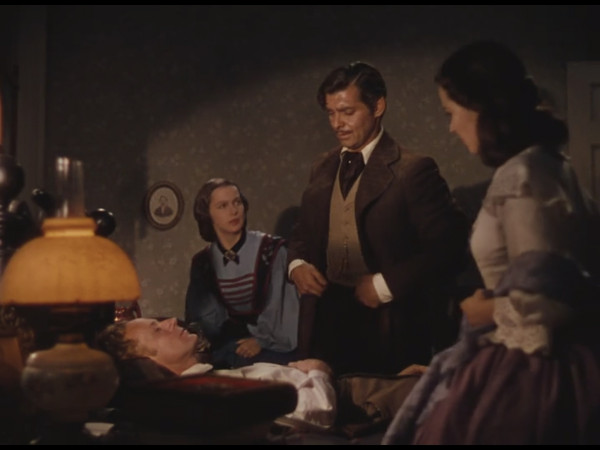 Finally, the film looks absolutely gorgeous. Of course, it's obviously California rather than Georgia, from the vegetation and the landscape; and Margaret Mitchell objected that Tara was far too elegant; in the book is was "built according to no architectural plan whatever, with extra rooms added where and when it seemed convenient". These are minor quibbles. The landscapes and architecture are beautifully realised but never get in the way of the human story; we go intimate and close, we pull out to look at the bigger picture, and in particular, as conflict loomed on the other side of both oceans, we see the horrors of war. We've had two outright war movies so far (Wings and All Quiet on the Western Front) and one where war was a distant but fatal prospect (Cavalcade); here we don't have a single battle scene, but a stark contrast between the gung-ho young warriors who set off to battle and the (rather few) casualties who return. Rhett's pragmatic rather than patriotic approach turns out to be the right way to go, and Scarlett succeeds when she adopts the same strategy. 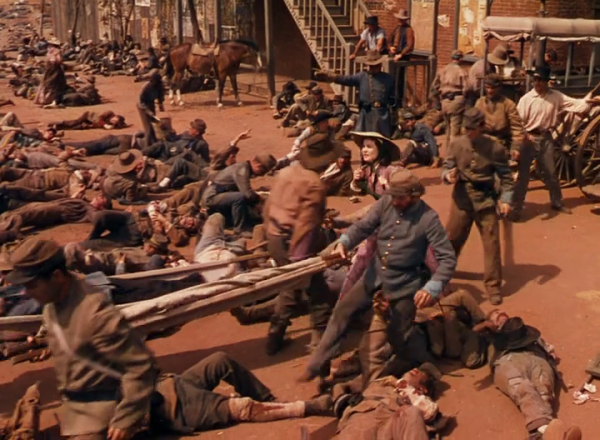 I had not seen this before, and of course I doubt that it will ever be on general cinema release again, but it is just about worth the four hours of my life it took to watch (plus time to write this review).

Next on the list is Alfred Hitchcock's Rebecca, where I have actually read the book, if a long time ago.

(Still reading the book - will report on it in due course.)