The Queen of Etruria and Pope Pius VII

For some reason, my Google Books homepage suggested that I would like to read this 1814 translation of three political narratives from the original Italian, bound together: Memoir of the Queen of Etruria, Written by Herself and An Authentic Narrative of the Seizure and Removal of Pope Pius VII, with Genuine Memoirs of His Journey Written by One of His Attendants.

The first of the three is by someone I had barely heard of, Maria Luisa, a Spanish princess whose husband was Duke of Parma until Napoleon occupied it, and then King of Etruria, a Napoleonic satellite state with its capital in Florence, until his sudden death aged 30 in 1803. Maria Luisa then ruled the kingdom as regent for their infant son until Napoleon annexed the lot in 1807; she and her family suffered a series of political reverses culminating in her imprisonment for three years in a convent in Rome. 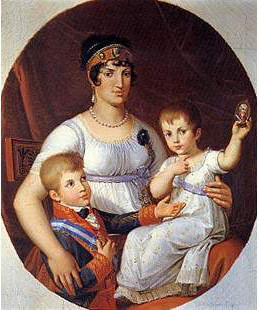 (Maria Luisa and her two children)

It’s rather rare to have an autobiographical account directly from the pen of a femalr protagonist in the politics of the era. Here’s the second paragraph, almost a short story in its own right, about how she and her husband travelled to Florence to take up the government of their new kingdom in 1801:

Shortly after this communication, I received instructions to quit Spain, in order to repair to Tuscany; which was done accordingly in April, 1801. My grief was excessive at this separation from my family, and from my native country, to which I was, and indeed am, most sincerely attached. It now occurs to me to mention a circumstance, which caused me no small dread at the commencement of my journey. The Prince of the Peace came to pay a visit to my husband, when I happened to be present; and, taking occasion to introduce the subject of our journey, he told him that it would be necessary for him to go by way of Paris, because the First Consul desired it;—"by way of experiment," — the word escaped him, — "to see what effect the appearance of a Bourbon would have in France." My husband and I shuddered at this discourse; by which it appeared, that our lives were to be risked, by exposing us in a country, where so atrocious a massacre had already been made of our family. Reflection, however, was of no avail, and through Paris we were constrained to take our route. As far as the Spanish frontier I was accompanied by the guards, and by the whole household of the king, my father; but, upon my entrance into France, to my great grief, every Spaniard was ordered to quit me, with the exception of four or five noblemen and my confessor, whom, as an extreme favour, I was permitted to take with me to Florence; and, in the place of those who were sent away, we were joined by a French general, who accompanied us to Paris, with a guard of French soldiers, and lodged us in the house of the Spanish minister. Here we were treated with great attention, and received abundance of invitations and entertainments, which I was little able to enjoy, a Tertian ague having seized me immediately on my arrival, which confined me almost entirely to my bed. We remained at Paris about twenty days, and then proceeded for Tuscany, accompanied by another French general. This journey was not very beneficial to our health. My husband was never well after his stay at Paris, and my fever still continued. In this state we reached Parma, and there, the tenderness with which I was treated by my husband's parents, the Duke and Duchess of Parma, and by his sisters, the princesses, restored me, in some measure, to the enjoyment of happiness. I was not, however, quite free from uneasiness. My son, not yet one year old, had suffered greatly from the effects of his journey; and, through the fear and fatigue she had undergone, his nurse's milk so disagreed with him, that he was for some time at the point of death. But, thank God, he recovered; and, after three weeks passed at that city, we set off for Florence. I felt real affliction at parting from the duke and duchess, since I loved them sincerely, and was beloved by them in return.

It is of course a political memoir, partly aimed at boosting her efforts to reclaim her son’s kingdom and partly also as a reminder of the Naopleonic regime’s vicious treatment of its opponents. Important events and facts are omitted, or slanted against the French. But it’s still instructive to have a direct voice from a woman of Maria Luisa’s position.

It doesn’t really hit the mark in terms of being an effective manifesto for a return to Bourbon government in Etruria. I don’t know what criteria the Congress of Vienna used to assign kingdoms to princelings, but if I had been advising Maria Luisa, I would have stressed her (admittedly skimpy) record on good governance and the promotion of her subjects’ economic and intellectual progress, and her readiness to play a positive role in the new international system and to educate her son to take his place in that structure when he came of age. She did in the end get Lucca as compensation, to rule in her own right; she accepted it only grumpily, refusing to take over the government until 1817, and then ignored the liberal constitution, ruling as an absolute monarch until she died of cancer, aged 41, in 1824.

Her son Louis, who was not really interested in government, left running Lucca to the locals until he sold it to the Grand Duke of Tuscany in 1847; he then inherited the Duchy of Parma, his father’s original domain, from the Austrian former Empress of France, Marie Louise, later in 1847, but was chucked out in a revolution shortly thereafter, and died in 1883 after more than twenty years of increasingly impoverished exile. (His son, who succeeded him, was assassinated in 1854 at the age of 30.) Maria Luisa’s daughter Luise married three times, her first husband being Maxilian, the Crown Prince of Saxony, the widower of one of her aunts, who was 43 years her senior. Six of her seven stepchildren (also her first cousins) were older than her. She died in 1857, aged 54.

The other two books in the compilation are attempts to get the English-speaking world outraged by the treatment of Pope Pius VII by Napoleon. The second paragraph of the “Narrative of the Seizure and Removal of the Supreme Pontiff, Pope Pius VII, on the 6th of July, 1809” is as follows:

On the 5th of July they were joined about two o'clock, P.M. by five or six hundred conscripts from Naples, who were quartered in the Castle of St. Angelo.

And the second paragraph of the “Genuine Memoirs of His Journey Written by One of His Attendants”, whose author signs himself M.D., is as follows:

I am glad that you have already been informed, by an able writer, of the infernal cabal which engendered that impious design of carrying away the Pope — combining, for the same purpose, the dregs of the disorderly Romans with those whom the delirium of an irreligious fanaticism rendered averse to the supreme head of the faith and their own natural sovereign, already conscious of their enormous transgressions. 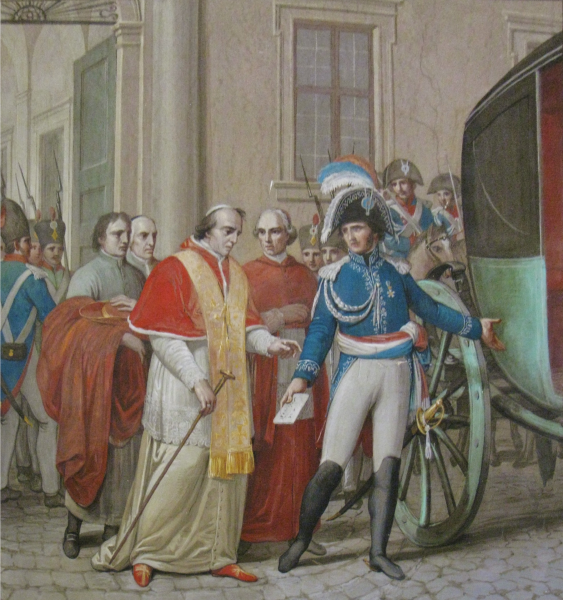 (The Arrest of Pius VII, by Benoit Lhoest)

It’s much more difficult to sympathise with the predicament of the Pope, who was only getting the same treatment that other Popes had meted out to their opponents over the centuries. And it’s difficult to imagine that many Protestants in the ruling class in England, Scotland or Ireland were deeply dismayed by the dissolution of theocratic rule in the Papal States. Still, it’s interesting to read an account (admittedly biased) of the problems the French had in controlling popular affection for the exiled Pope in France. Pius VII was restored to power in the Papal States fairly uncontroversially in 1814, and died aged 81 in 1823. There are many interesting things to be said about the relationship between Napoleon and the Catholic Church, and these accounts say very few of them, despite the fact that Pius VII was Pope for most of that time.
Tags: bookblog 2017
Subscribe