The Dancers At The End Of Time

‘Dear friends, you have doubtless already guess that this party has a theme. That theme, needless to say, is “Disaster”.’

This reached the top of my pile of unread sf books as recommended by you, without my realising that I had in fact read it in 2005. My review from then is posted below; nothing in the first 50 pages made me think I would change my mind this time (though there are two nice introductions by John Clute and bythe author himself), so I am moving on to something else. Next in that particular pile is The Past Through Tomorrow, by Robert A. Heinlein, which was already high up the list. 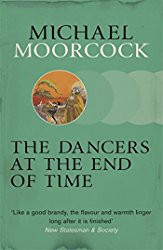 Edition uniting An Alien Heat, The Hollow Lands, and The End of All Songs. A bit of a one-joke book, this: hero from sexually liberated culture falls in love with woman from a much more repressed culture; this basic plot is the making of many stirring love stories, but here it is played for laughs, the repressed culture being late nineteenth-century London. The anarchic, pansexual, abundant society at the End of Time perhaps inspired Iain M. Banks a little, but Banks carries it off much better. Comic policemen and small furry (but vicious) aliens caper rather pointlessly through the timewarps, as do in-joke characters from Moorcock's other books and from elsewhere. The end of the universe happens but doesn't seem to make much difference.
Tags: bookblog 2017, writer: michael moorcock
Subscribe