Tanya (Vivian Oparah), Charlie (Greg Austin), Quill (Katherine Kelly), April (Sophie Hopkins) and Ram (Fady Elsayeh) defend the world
A good Who trivia question: can you name all of the spinoff series? Most fans (and not just of Doctor Who) will be able to name Torchwood and the Sarah Jane Adventures; a bit more headscratching will generally get you the 1980 K9 and Company; a very few will be dimly aware of the Australian K9 series. I fear that last year's Class is likely to end up at the lower end of the awareness scale, not really through any fault of its own - there was a noticeable lack of publicity and the times of broadcast were very variable (I confess that we only got around to watching the last of the eight episodes last week).

Class is set in Coal Hill Academy, in the present day (ie 2016); the background is that Charlie, a blond gay alien prince played by Greg Austin, is doomed to exile in the company of his bonded arch-enemy Miss Quill, posing as a physics teacher and played by Katherine Kelly, both endangered by the alien Shadowkin. Sporty Ram (Fady Elsayed), brainy Tanya (Vivian Oparah) and normal girl April (Sophie Hopkins) round up the numbers, boosted also by Charlie's boyfriend Matteusz (Jordan Renzo). Nigel Betts repeats his role of the headmaster from Doctor Who, but is replaced after a couple of episodes by a new principal played by Pooky Quesnel (who played the spaceship captain in the 2010 Doctor Who Christmas special, A Christmas Carol). Peter Capaldi appears as the Doctor in the very first episode, and charges our heroes with defending the earth against the rift in spacetime located in the school. All eight episodes were written by Patrick Ness.
It's quite good rather than outstanding. The show is thoroughly stolen by Katherine Kelly (whose six years as Becky on Coronation Street won her two awards) as Miss Quill, the snarky frustrated former terrorist/freedom fighter disguised as a physics teacher. She gets the seventh episode (The Metaphysical Engine, or What Quill Did) almost entirely to herself, unencumbered by the other regulars. She gets practically all the good lines:


Of the younger stars, Vivian Oparah as Tanya impressed me most, particularly in the third episode (Nightvisiting) where she has an intense and completely convincing confrontation with her dead father, played by Kobna Holdbrook-Smith. (Oh yeah, in keeping with my usual practice: the second line of the third eipsode, not counting the pre-credits seqience, is Tanya's "father"'s reply "It is", to her assertion, "It isn't you.") 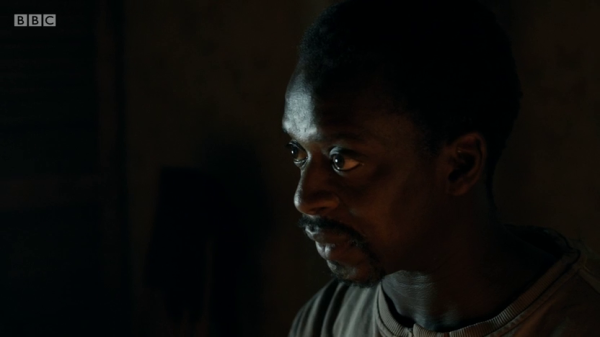 The makers deserve kudos for having a diverse group of protagonists and explicitly foregrounding the Charlie/Matteusz relationship. (Just to note, in terms of a less often cited component of diversity, that the eponymous Coach with the Dragon Tattoo of the second episode is played by Scottish actor David McGranaghan with what sounds to me like an Ulster accent.) Yet somehow it doesn't gel in the way that Buffy (explicitly referenced more than once) does from the word go. Part of it, I guess, is simply that the show had less money thrown at it (though there are still some pretty good effects, especially in the fourth and fifth episodes which take place on the Shadowkin world).

So, for a completist Whovian like me, it's essential viewing, much more so than the Australian K9 series. Others should try the third episode first, and if it's to your taste, watch the rest in sequence. The last episode (The Lost) is rather disappointing, I'm afraid, with too many plot elements thrown at the wall, including some hitherto-unreferenced elements from the parent show, in the hope that something would stick. (Not the only season finale in the history of Who which didn't deliver on the promised bang, of course.) In my personal head-canon the show can end with the revelation at the end of episode six (Detained) and its explanation in episode seven.
Tags: doctor who, tv: class
Subscribe