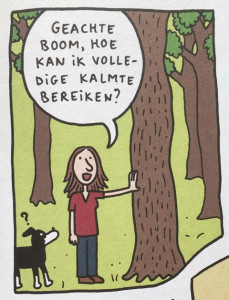 Barbara: "O tree, how can I achieve complete serenity?"
As previously noted, I'm a big fan of the Dutch graphic artist Barbara Stok, whose only work translated into English (so far) is her biography of Vincent van Gogh - I bought Toch Een Geluk (roughly, "It's Just As Well") at the Van Gogh Museum in Amsterdam. Her work is generally autobiographical, ranging in length from a single frame to a half-dozen pages for individual pieces. In this 2016 volume she recounts incidents from her life around 2010 when she wrote and then published the van Gogh book - though in fact that occupies less than a quarter of the pages, the rest being about life with her partner Ricky (who is a new devlopment since the earlier books that I had read). Her humour is self-deprecating, her views on making the world a better place and being a better person mildly inspiring, and the art manages to convey a surprising amount of emotion and depth in a very cartoonish style. Toch Een Geluk is apparently now being translated into Korean (after the success of the van Gogh book there); I'm a bit surprised that no enterprising English-language publisher has picked up on her work yet.
Tags: bookblog 2016, comics, dutch, writer: barbara stok
Subscribe