Alice in Sunderland, by Bryan Talbot 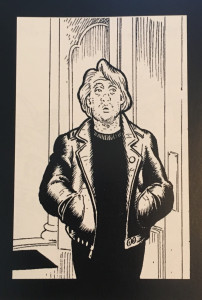 Wow. How come nobody told me about this sooner? (Well, yes, I know you told me. I should have listened.) This is a glorious exploration of the cultural history of Sunderland and its immediate vicinity, and specifically its impact on the Alice books and the other works of Lewis Carroll. Talbot makes the argument that Oxford has for too long claimed a monopoly on Alice, when in fact both Dodgson and the Liddell family had long-standing links with this part of North-East England, and there is convincing evidence that the relationship between the families, and many crucial details in the books themselves, depend crucially on the Wear estuary. Talbot presents the entire story as told by two of his own avatars to a theatre-goer, assisted by various mythic and historical figures including the ghost of Sid James, who literally died on stage in Sunderland (on my ninth birthday, I note). And there are many diversions into Talbot's own career and personal history, and into the history of comics, picking up many pleasing resonances and a number of spot-on pastiches.

I thought this was brilliant. I love deep local histories anyway - the Irish word is dinnseanchas, the lore of places - and the fact that I know very little about that part of the world possibly enhanced my enjoyment as Talbot makes his immediate geographical landscape relevant to the cultural references which I know much better. It's a little demanding in that some knowledge of Talbot's other work, and much knowledge of Lewis Carroll, is assumed, and I guess when this was first recommended to me I probably lacked the former. But I also suspect that readers who know less about the writer can skip the more Talbot-centric parts and get a lot out of the rest. Nice also to see some photography by

Alice in Sunderland was shortlisted for the BSFA Award for Best Novel of 2007; as Niall pointed out at the time (NB Talbot responds several times in comments), it is only tenuously sf and not really a novel, and duly lost to Brasyl. But it's great that its genius was recognised by BSFA nominators.

This was the top unread comic on my shelves. Next on that list is volume 1 of Paper Girls, by Brian K. Vaughan and Cliff Chiang.