The Ramblas today was not much like George Orwell describes it in the opening of Chapter X of Homage to Catalonia. The buildings are all mostly still there, but the human landscape is a bit more peaceful

About midday on 3 May a friend crossing the lounge of the hotel said casually: 'There's been some kind of trouble at the Telephone Exchange, I hear.' For some reason I paid no attention to it at the time. 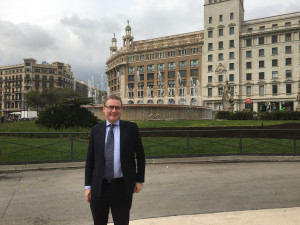 (The telephone exchange on Plaça de Catalunya today, with tourist)
That afternoon, between three and four, I was half-way down the Ramblas when I heard several rifle-shots behind me. I turned round and saw some youths, with rifles in their hands and the red and black handkerchiefs of the Anarchists round their throats, edging up a side-street that ran off the Ramblas northward. They were evidently exchanging shots with someone in a tall octagonal tower--a church, I think--that commanded the side-street. I thought instantly: 'It's started!' 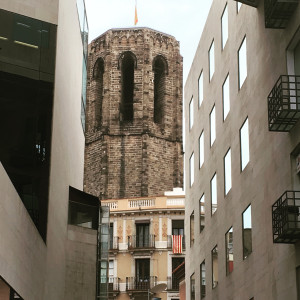 (The octagonal tower of the Basilica de Santa Maria del Pi, visible down Passatge d'Amadeu Baguès)
But I thought it without any very great feeling of surprise--for days past everyone had been expecting 'it' to start at any moment. I realized that I must get back to the hotel at once and see if my wife was all right. But the knot of Anarchists round the opening of the side-street were motioning the people back and shouting to them not to cross the line of fire. More shots rang out. The bullets from the tower were flying across the street and a crowd of panic-stricken people was rushing down the Ramblas, away from the firing; up and down the street you could hear snap-snap-snap as the shopkeepers slammed the steel shutters over their windows. I saw two Popular Army officers retreating cautiously from tree to tree with their hands on their revolvers. In front of me the crowd was surging into the Metro station in the middle of the Ramblas to take cover. I immediately decided not to follow them. It might mean being trapped underground for hours. 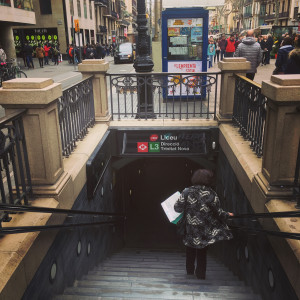 Spine-chilling to read the words in the exact place which they describe.