nwhyte at Enclos des fusillés / Erepark der gefusilleerden; and Edith Cavell
A combination of unexpectedly driving to work and an early start meant that I was able to take a small detour to a fascinating but grim place, the Enclos des fusillés / Erepark der gefusilleerden, which is a stone's throw from the Brussels end of the E40 motorway as you come in from the east.

This was originally the Belgian state shooting range, but it is now a memorial for those who were shot by German firing squads here during the occupations of both world wars.

The park is on three levels - the green entry level, and then two steps of memorials. This is more or less from the entrance: and this from the step between the memorials, looking back. Presumably the artificial hillface was where the actual targets were set up. And this is from the lower level, looking back up at the middle level. Most memorials are marked with crosses, though there are a few stars of David. You can't see it here, but the crosses two rows back are marke 'Inconnu - Onbekend'. The slab on the left is a memorial erected by survivors of Nazi camps in the second world war. All those who rest here were killed during the Second World War. 35 prisoners were executed here during the first world war, but they were returned to their families after the conflict. They are commemorated in the plaque visible in the middle of my second picture above 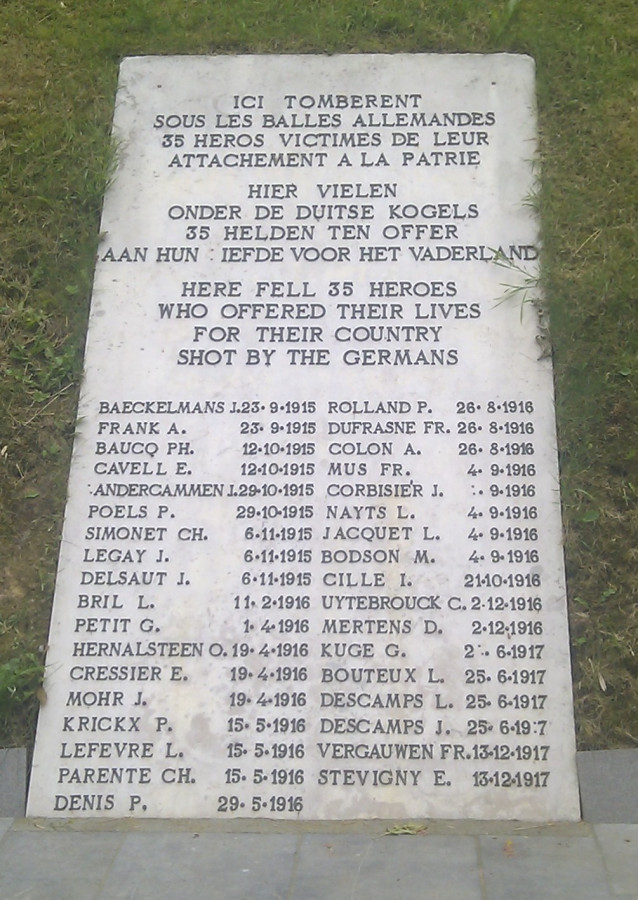 The third name on the list is that of Edith Cavell, who was executed in 1915 for assisting Allied troops to escape to England from occupied Belgium. The Germans' decision to have her shot, combined with the sinking of the Lusitania a few weeks before, helped harden sentiment against the Germans in America and was exploited ruthlessly by the Allies. Her statue can be seen outside the National Portrait Gallery in London, and her grave is in Norwich Cathedral.

I wonder if she would have been all that pleased by the use of her image and fate as a propaganda tool. Her final statement was that "I know now that patriotism is not enough, I must have no hatred and no bitterness towards anyone." Words worth remembering. I also like to think she would have been amused at her depiction as a vulnerable and comely maiden; the photographs show her as exactly the sort of grittily determined senior nurse who would grimly take the consequences of doing what she thought was right.

To return to the park: it is a bit neglected, but it is still there. Rather like Belgium's memory of the two World Wars, really. I can't really recommend it to casual visitors to Brussels - it's inconveniently located and not a lot to see there. But it was worth a detour after an early start on an overcast morning.
Tags: world: belgium
Subscribe