Not as the result of any particular forward planning, we got two newish graphic novels about Vincent van Gogh recently: Vincent van Gogh: De Worsteling van een Kunstenaar, by Marc Verhaegen and Jan Kragt (also available in English); and Vincent, by my favourite Dutch comics writer Barbara Stok, which we got in English translation. Both are sponsored by the van Gogh museum in Amsterdam, making the most of their cultural assets. It should also be said that part of van Gogh's legacy is precisely to challenge all visual artists to match his depth and quality of expression, and this may weigh particularly heavily on his fellow Dutch speakers: Verhaegen is perhaps the leading Flemish comics artist of today, and Stok (whose other work I love) is a rising star of the genre in the Netherlands.

The two take surprisingly divergent approaches to their subject. Verhaegen's drawing style is much more realistic than Stok's; the colours and settings are lush and he includes references to a lot of van Gogh's works in individual frames. But in terms of text and storyline, he and Kragt opt for edutainment: van Gogh's biography is recounted to us via a series of infodumps, while a loose linking narrative has a comical art fancier called Dupont (perhaps a Tintin reference, though there is only one of him) chasing a lost van Gogh sketch through Paris. Stok, on the other hand, has a much more cartooney drawing style but sticks much closer to van Gogh's own viewpoint during his crucial time in Provence, including substantial quotes from his correspondence with his brother (which I was surprised to learn was originally in French, at least during the last years of his life). A key difference between the books is how they portray his hallucinations: Verhaegen shows the scenery turning into lurid and detailed scary monsters to threaten him, while Stok shows us the artist's despair as his world appears to disintegrate. Verhaegen and Kragt give us quite a good portrait of how van Gogh came across to other people; Stok gives us a strong sense of how he might have thought of himself.

(One other very trivial difference is that the Belgian Verhaegen devotes several pages to the young van Gogh's time in Belgium, whereas the Dutch Stok barely mentions it.)

These are both good books. Verhaegen's art is more gorgeous, but Stok's sparse style is also pretty evocative; and she gets a strong sense of authenticity by using her subject's own words. Well worth getting both if you are a comics fan with even a mild interest in Van Gogh, or vice versa. 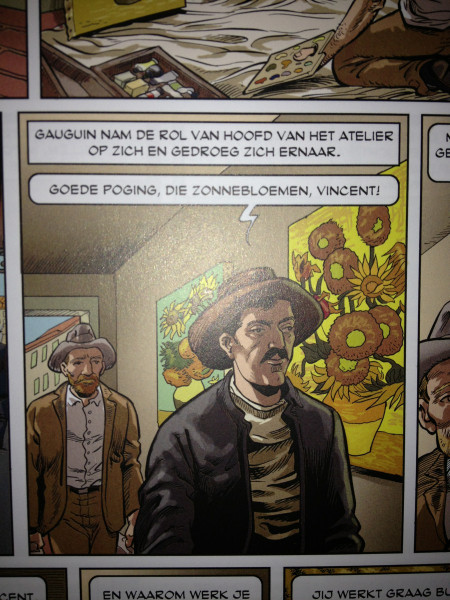 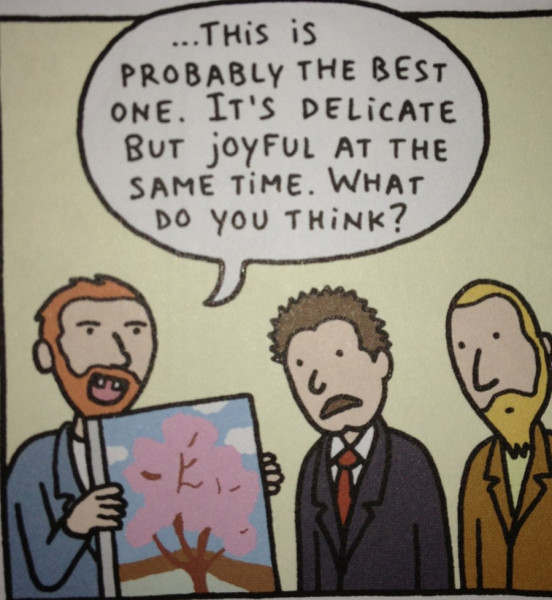 Van Gogh fails to impress some new friends, as shown by Stok.