"You have two hearts, you're stronger and fitter than other people, you've got greater mental capacity: better memory, faster responses. Have you ever wondered why you are different?"

Years before Georgia Moffett sprang from David Tennant's thigh (or wherever), the Eighth Doctor had an adopted daughter: Miranda Dawkins, lost scion of a imperial family from the far future, growing up in the vividly recalled 1980s (reminiscences of Thatcherism rather appropriate for the moment), the target of youthful desire from her classmates and assassination attempts from her political enemies, and trying to get to grips with both. It's not completely clear to me that Miranda is actually a Gallifreyan; though she has two hearts and a lower body temperature, she ages at the normal rate for a human child / teenager, and her future Empire doesn't sound very Timelordish to me. Parkin's portrayal of the Doctor (still amnesiac as he has been for the last few books) as a loving but very absent-minded single parent is very compelling, and the final section in which the Doctor and his human companion Debbie steal a space shuttle to rescue Miranda is suitably bonkers.

I am not yet a convert to the Faction Paradox concept, but if this book is part of it then I am a few steps closer now. 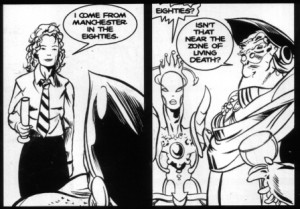 I was sufficiently intrigued by Miranda to want to find out what happened to her afterwards. She appeared in three issues of a planned six as the central character of the comic Miranda before the company publishing the story ran out of money. The comic leans quite heavily on Father Time to the point where it would be difficult to follow for readers who did not know the novel. There's some humour at 80s child Miranda being thrust into ruling a future empire, wearing school uniform as the least inappropriate thing in her wardrobe, but then we lose the boring (and not terribly convincing) politics for exciting attempted kidnapping and assassination, and escapes and chases. We end on a cliffhanger with Miranda losing allies and confronted by her enemies. What happened next? We shall never know.