So, I reach the first full season of the Sarah Jane Adventures. Absolutely excellent stuff, and if you haven't watched it you should. The episodes are 30 minutes long, which again is a bit awkward for my commute (two 20-25 minute trains with 5-10 mins between them); I also found I tended to want to watch the good bits again, and there are quite a lot of them.

First time round I rated Revenge of the Slitheen the weakest of the five stories. I didn't think so this time; sure, it has essentially the same plot as School Reunion, but that's not such a bad thing. Daniel Anthony as Clyde is a huge improvement and lifts the show. The Slitheen, who I thought awful in the Eccleston two-parter and just about bearable in Boom Town, are really rather good here, and the tension between their threat to destroy the earth, Luke's deception and the strategic use of vinegar is very effective.

Eye of the Gorgon is really very good. Phyllida Law is fantastic as a guest star, and for a kids' programme to deal with Alzheimer's this explicitly is impressive; the sinister nuns are great, and the bits around Maria's family are very good not just the drama of trying to keep her father unaware and yet seeing him turned to stone, but also her mother's horrendous insensitivity; the previous season of New Who's depictions of troubled families (particularly in The Idiot's Lantern) seem even more cartooney now. The ending is a bit "with a bound, Maria's mirror set them free" but otherwise this is good.

If Warriors of Kudlak had nothing else, I would love it for its homage to Kate Bush's "Cloudbursting" (see author's note). Apart from that, it's a nice nod to the world of games, a topic which gets fewer nods in the Whoniverse than one might expect, with fairly clear nods to Ender's Game; it's nice to see some actual reference to the Iraq War as a real thing in which real people got killed, rather than a comedy backdrop for a two-part story about the Slitheen; and the twist at the end was quite sophisticated. Though I regret that we won't see more of Nadiyah Davis as Jen.

[cut and pasted from my original write-up in 2007; I stand by it, except that I am now clearer on the Graske.]

Whatever Happened to Sarah Jane? is, frankly, Hugo-worthy. As their loved ones are torn away from them, Maria and Alan successively have their world fall apart, and Jane Asher (who previously played the Doctor's grandduaghter in the radio play "Whatever happened to Susan") is superb as Sarah Jane's alter ego Andrea. (F asked me, "So does that mean that Andrea had all those adventures with the Doctor instead?" I suppose so - fan-fic writers, get to it!) A really brilliant fifty minutes of television, the only puzzling thing for me being the role of the Graske. Not surprised to see that Graeme Harper directed it.

It is an interesting historical note that in 1964, as the fictional Andrea and Sarah are reading about the Beatles playing Brighton, the real Jane Asher was Paul McCartney Paul McCartney's girlfriend. For comparison, pictures of her then and of Francesca Miller playing the young Andrea: 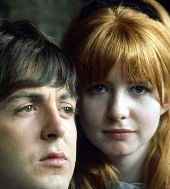 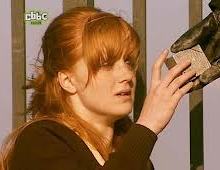 Not a bad likeness.

The Lost Boy wobbles a bit due to its dependence on Thomas Knight as Luke; he was basically the weakest of the core cast and only just about carried it off. It's also notable that this shares themes of playing with the core characters' identities and cosmic disaster with the immediately preceding story, and the concept of the Moon being zoomed in to threaten the Earth and then zoomed back out again is very silly indeed. But the mystery of Luke's identity is very well done, the treachery of Mr Smith well executed, and the cliffhanger between the episodes with Clyde apparently disintegrated and the surprise return of an old enemy is the best of this series. (Also I cheered out loud at the unexpected return of an old friend in the last few minutes.)

Time Crash, the first (and so far only) multi-Doctor story of New Who (apart from regeneration sequences), is a lovely homage to Old from New. Sure, Davison is grumpier (but also funnier) than he ever was in the 1981-84 period, but he's also clearly delighted to be back; and if there is one particular kind of scene which Moffat excels in writing, it is comedic misunderstanding - see for instance his scene with the kleptomaniac and the detectives in the Tintin movie, or The Girl With Two Breasts. Note also the second ever mention of Belgium in TV Who. If you have any doubts about whether it's OK to like Time Crash, with its breach of the fourth wall and fannishness, Philip Sandifer will put you right.

I very much enjoyed rewatching all of these. In particular, it's striking that none of the five SJA stories is very bad, and two (Gorgon and Whatever?) are really superb. There are various runs of Old and New Who where there are five consecutive decent stories (most recently before this, the run from Dalek to The Parting of the Ways which is actually six good stories in a row), but it is rare to have an entire season where even the low points are still pretty watchable. And Time Crash is an added bonus.