birdsflying proposed earlier in the week to lead a project of posting a picture a week to Flickr, based around a common theme for each week of 2013. This seemed to me a good reason to reactivate my Flickr account and try to hone my own photography skills. A picture a day, as some dedicated people do, is quite a commitment, but one a week is surely manageable.

Sensibly enough she has proposed "New Year" as this week's theme. I suspected that I might get something appropriate from the newly started Irish presidency of the European Union, and when I peeked into the Justus Lipsius building, where all the EU summits are held, on my way back from lunch, I realised I had timed it just right: they were literally in the act of raising the Irish presidency banner in the atrium. 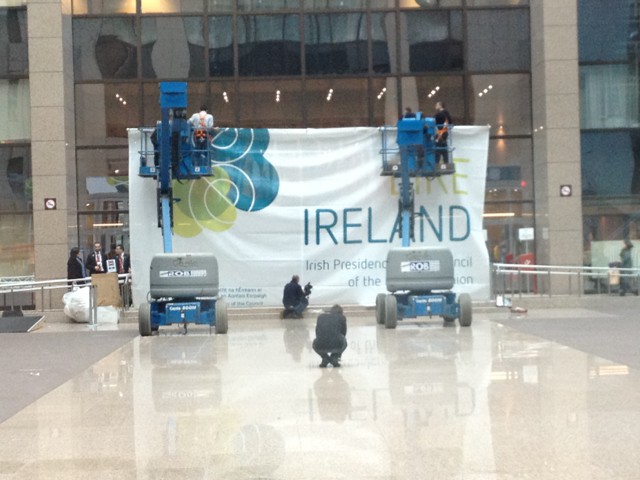 So the European semester begins, and so too does this project. It is a little askew, and suffers from being taken through bullet-proof glass, but one has to start somewhere.

Eszter Hargittai has eloquently explained why one might want to undertake such a project in the first place, and I have signed up for her Flickr group too. After all, two photos a week is surely manageable. I think.