First frame of third page (should be second frame if I followed my usual practice, but I like this more):

Deep on the bottom
of the ocean
lived
a whale.
She was
a hundred thousand
years
old.
This won the Willy Vandersteen Prize last month, for the best comic in Dutch of the last two years. (I raise my eyebrows a little at this, as Zidrou, the writer, is a Francophone, and the book was published in French as La Baleine bibliothèque before the Dutch version came out.) I previously read and enjoyed Judith Vanistendael's De maagd and de neger; here she is the artist, Zidrou is the writer, and they have produced a lovely and moving short story about a whale who contains an entire library, and the marine postman who makes friends with her. The Willy Vandersteen jury described it as "F***ing accessible" which seems to me a slightly strange but not inaccurate description. Once the English translation comes out, get it for your younger friends or relatives and enjoy it with them, and if you want to practice your French or Dutch, you can get the French version here and the Dutch version here. 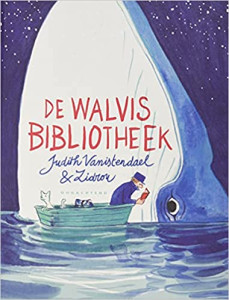 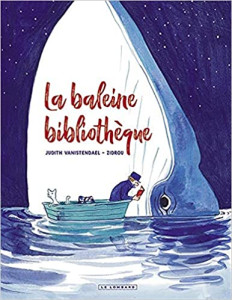