Looking back at my old reviews, I spotted this as a gap in my write-ups of Agatha Christies and decided to fill it. I actually think it's one of the better ones. A friend of Miss Marple's sees a murder happening on a train running parallel to her own; Miss Marple sets out to find the murderer, with the help of a star Oxford graduate who has decided to devote her life to skilled domestic work (er... it must be admitted. one of Christie's few solid independent woman characters) and the hindrance of a confused family situation which seems to be at the heart of it all, as the story evolves into a country house mystery. There are throwaway remarks about the evils of socialism, but generally made by the less pleasant characters which makes one wonder where the author's own sympathies lay. The new National Health Service features as a topic (new-ish in 1957), as does the easy availability of abortion services in France. I had read it as a teenager and remembered only that the actual murderer turned out to be someone rather unlikely, as indeed is the case. The reader is not given quite enough information to make the solution fair, but does get enough to make it interesting, and there are some excellent twists along the way. You can get it here.

I don't think I will revive my Agatha Christie project, but if I do, the next in sequence will be Curtain: Poirot's Last Case. 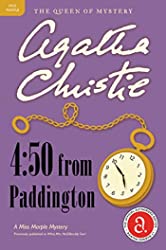