He even made some dim, half-secret experiments towards remedying the deficiencies he suspected. He spent five shillings on five serial numbers of a Home Educator, and bought (and even thought of reading) a Shakespeare and a Bacon’s ‘Advancement of Learning,’ and the poems of Herrick from a chap who was hard up. He battled with Shakespeare all one Sunday afternoon, and found the ‘English Literature,’ with which Mr. Woodrow had equipped him, had vanished down some crack in his mind. He had no doubt it was very splendid stuff, but he couldn’t quite make out what it was all about. There was an occult meaning, he knew, in literature, and he had forgotten it. Moreover, he discovered one day, while taunting the junior apprentice with ignorance, that his ‘rivers of England’ had also slipped his memory, and he laboriously restored that fabric of rote learning: Ty Wear Tees ‘Umber —’

Another of H.G. Wells' famous non-sf novels, this one famously made into a musical and film starring Tommy Steele which I saw on TV a few times.(NB that the shop owner is played by Hilton Edwards, one of the famous Boys of Dublin.)

I wasn't really satisfied. Arthur Kipps, the protagonist, comes from a humble background, gets a girl, unexpectedly becomes rich, gets a different girl, decides he can't take being middle class, goes back to the first girl, loses his money, gets it back again and ends up happy having found his place. Wells is trying to write about the evils of class distinction and inequality, but comes across as rather patronising of poor Kipps. I think it would have been interesting to speculate a bit about the absence of his father and early death of his mother made it difficult for Kipps to make relationships work; and a bit more editorial comment on the ritual humiliation meted out by the middle classes on a parvenu would have been welcome. (Having said that, I found Helen, the dumped girlfriend, rather sympathetic even though she is one of the main agents of this process.) So in the end I felt that the book rather pulled its punches. You can get it here.

This was my top unread book by Wells. Next in that list is Ann Veronica, of which I know nothing. 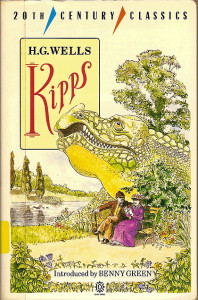