‘Certainly,’ replied the man who was calling himself Mr Fisher. He unbuttoned his jacket, shifted forward in his seat and gave the psychic his undivided attention.

I am familiar with Adams’ Whoniverse writing (includes a particularly good Torchwood novel), but this is a different series, the middle book of a loosely linked trilogy about the Clown Service, a secret British government agency fighting paranormal terrorism. Dark forces are attempting to cause a high-level conference between the UK and South Korea to disintegrate in acrimony and mysterious deaths (always accompanied by hyper-localised rain and a spectral bride). The writing is fun, but I really didn't have much of a clue what was going on. You can get it here.

This was at the top of all three of my (almost exhausted piles) of books acquired in 2014. The more popular of the remaining two is Crashland by Sean Wiliams, the one that has been longer on the shelves is The Empire of Time by David Wingrove, and they are of equal length. 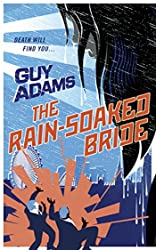