Nevertheless, in a show of civic dedication, or mindless bloodlust - and they really are so similar - Night Vale's librarians have banded together in defiance of authority to reinstate Summer Reading. Colorful posters with appealing statements like, "Get Into A Good Book This Summer!" and "We Are Going To Force You Into A Good Book This Summer!" and "You Are Going To Get Inside This Book, And We Are Going To Close It On You And There Is Nothing You Can Do About It!" have appeared overnight around the library entrance and in local shops and businesses, all sporting the clever tagline, "Catch the flesh-eating reading bacteria!" The Sheriff's Secret Police have responded by interrogating the proprietors of businesses where the posters have appeared, and by removing and confiscating the posters themselves. Although, to be honest, listeners, the graphic design work is really cute. I mean, have you seen them? The little flesh-eating germ, with his sun hat and library book, using a screaming semi-skeletal human victim as a beach chair? Ah! Adorable.

The scripts of the second year of Welcome to Night Vale, in which there is a sort of narrative arc of the mayoral election contest between The Faceless Old Woman Who Secretly Lives In Your Home and Hiram McDaniels, the five-headed dragon; also the burgeoning romance between Cecil and Carlos; the conflicts with Desert Bluffs and with Strexcorp; and the heroism of Intern Dana and teenage Tamika Flynn. But of course the overall structure matters less than the individual paragraphs:

The Museum of Forbidden Technologies is proud to announce their new special exhibit: "A Startling and Highly Forbidden Piece of Technology Brought to Us by Time Travelers... or Ancient Long-Dead Aliens... or Russians... or Whatever."

The technology will be kept in a locked vault, which itself will be wrapped in thick black bandages, with a hand-written sign taped to one side saying only:

Your ticket includes a free audio guide, which will play a single piercing tone, designed to considerately remove you from the world of thought, and sound, and sentience.

The Museum of Forbidden Technologies. Bring your kids! Otherwise, something even worse might happen to them.

Look, I know deer are cute and friendly-looking. We all remember adorable little Bambi, from the classic animated movie, with his sweet voice and white freckled rump. But we also remember the bloody end that he wrought on the humans at the end of the film, the graphic beheadings, and trees streaked with gore during the famous revenge-fueled climax.

The lesson of that movie, as in life itself, is that nature is gorgeous, and it is horrible, and it will kill you.

This has been the Children's Fun Fact Science Corner.

In a previous broadcast, we described the world as "real."

We indicated, using our voice, that it was made up of many real objects and entities, and we gave descriptions of these disparate parts. We even went so far as to ascribe action and agency to some of these entities.

But, as we all know, nothing can be fully understood to be "real." Any description of the world we give is simply the world we experience – which is to say, a narrative we force onto whatever horror or void lies behind the scrim of our perception.

We at the station offer our deepest, most humble apologies for the previous, erroneous, report. We affirm once again that nothing is real – including this correction, and least of all, your experience of hearing it.

This has been Corrections.

Nothing quite beats the original deadpan audio delivery, but it is great to have the script for the bits you might not have heard because you were laughing too hard. You can get it here.

This was my top unread book acquired in 2016. Next in that pile is the second Zelazny collection with the title The Last Defender of Camelot. 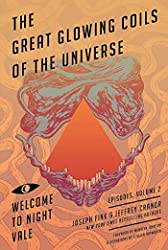