The little bird surveyed the silence of twilight within a new smell of burning that explained a curl of black smoke in the horizon. He fluttered lime-mottled wings and landed on a branch tremulous from tepid wind. So this was Ngoni Village, the warm heart of German East Africa. He reined himself with the tips of his claws, leaned his body with a subtle shift of weight on the bough. His face twisted skyward, where an eagle soared in a battle dance overhead.

I got this anthology because two of the stories in it made it to this year's BSFA long list - and indeed both made it to the short list, though neither won. It's billed as an anthology of speculative fiction from Africa and the African diaspora; there are thirteen stories altogether, most of them very good. It's interesting looking through the Goodreads reviews to see that different people have felt attracted to different stories in the anthology; I guess for me the ones that grabbed me most were “A Mastery of German”, by Marian Denise Moore, and “To Say Nothing of Lost Figurines”, by Rafeeat Aliyu. But most of them are pretty good. You can get it here.

This was my top unread book by a writer or writers of colour. Next on that pile is Groetjes uit Vlaanderen, by Mohamed Ouaamari. 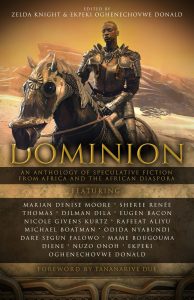