Another trawler nosed its way into the circle of piers, hunting for a berth among the gently jostling vessels. The most recent arrival was tying up, a couple of the crew handing off packing crates to be stacked on the pier by a third man.

In contrast to the Erimem series, I'm greatly enjoying these set of adventures of Brigadier Lethbridge-Stewart set just before the arrival of the Third Doctor into his life. Here he is sent off to the Aegean Sea to investigate mysterious threats, with his usual crew of assistants (who all get something to do) and an eccentric archaeologist and a Soviet officer who becomes a reluctant ally, along with a ruthless South African baddie. It fairly cracks along and I enjoyed it. Forward wrote one of the first Doctor Who books I read this century, before the 2005 reboot, and I've liked his work more often than not; this one's certainly in the "more" category. You can get it here. 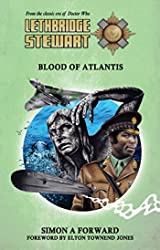