More or less on a whim (and a couple of positive recommendations seen on Facebook) I made a rare excursion to the cinema, my first since the pandemic, to see Shang-Chi and the Legend of the Ten Rings. It is a lot of fun. I'm really unfamiliar with the Marvel Cinematic Universe, having seen only Iron Man (which I didn't like) and Captain America: Winter Soldier (which I didn't like much more), Thor: Ragnarok (same again) and Black Panther (which I really liked, but failed to write up at the time). But I'm happy to report that Shang-Chi and the Legend of the Ten Rings can very much be enjoyed as a standalone film, on its own merits. Here's a trailer.
It's a super-hero film at heart; our protagonist, Shang-Chi (Simu Liu) is a super-skilled martial arts fighter working as a car valet in a San Francisco hotel. He is estranged from his father Wenwu (Tony Leung), who has become the leader of a global crime syndicate through use of the mystical Ten Rings, which give him super powers. Shang-Chi and his not-quite-girlfriend Katy (Awkwafina) go on a quest to find first his sister Xialing (Meng'er Zhang) and then their father, who is obsessed with finding Ta Lo, the hidden home village of their long-dead mother Ying Li (Fala Chen). Wenwu, however, is unwittingly being manipulated by dark forces trying to break through into our world to destroy it.

I had not seen any of these actors in anything before. However, I cheered when Michelle Yeoh, who I knew from Star Trek: Discovery, appears as Shang-Chi's aunt, one of the guardians of Ta Lo; and I boggled at Ben "Gandhi" Kingsley as a dissolute actor who helps the protagonists. I hadn't quite taken in that Kingsley had actually portrayed the same character in a couple of preious Marvel films, as an actor pretending to be The Mandarin, the leader of the Ten Rings, before he is captured by the real thing. The film as a whole is funny as well as action-packed, and Kingsley carries quite a lot of the humour and does it very well.

I felt it was an interesting window into Chinese culture a fifth of the way into the 21st century. Quite a lot of dialogue is in Chinese (and in my local Belgian cinema that meant squinting hastily at the French and Dutch subtitles to get what is going on). The story starts in San Francisco, and stays there long enough to meet Katy's Chinese family; we then move to Macao (though we don't see much more than Xialing's fight club) and finally meet lots of Chinese mythical creatures in Ta Lo (which is actually filmed in Australia, but we're led to believe it's a secret part of China). There is a lot more going on than I realised.

The special effects are really something. The emergence of the monster for the final battle is tremendous, and the various creatures of Ta Lo beautifully done. We take these things for granted these days, but it's always worth remembering that this is fairly new technology.

But really what makes the film is the fight sequences. Utterly unrealistic of course, and our protagonists have numerous very narrow scrapes. But the choreography of violence is so impressive that it rapidly got me past the ick of people harming each other and into the wow of how well it was put together. I'm well aware of course that there is a long tradition of this from kung-fu and wuxia, which I don't know so I can't say how much of this is genuinely new; but I found it all very watchable. Here's the opening of the fight on the bus in San Francisco, a brilliant scene which must have taken days to stage.
Anyway. My exploration of Chinese sf continues. I have a long way to go.

“Yes,” she said. “Good evening.” There were tears in her voice.

This is the fourth book in Robinson's Gilead series, about two families from the town of that name in Iowa. We had got parts of Jack's story in the earlier books Gilead and Home, but I confess I had forgotten most of the details and enjoyed Jack as if it had been a standalone novel. The protagonist is the alcoholic, self-loathing son of a preacher, who falls in love with a black woman, Della (whose father is also a clergyman), in St Louis in 1956. It's a slow-moving story, but it's moving as well as slow. Jack gradually finds his path to redemption and Della her path to independence; it's not an easy time for a relationship like theirs, but Robinson takes us through it all carefully and believably. I really enjoyed this. You can get it here.

Jack bubbled to the top of three of my lists simultaneously - top unread book acquired this year, top unread book by a woman and top unread non-sf fiction. Next on the first of those lists is Mortal Engines, by my fellow guest at next year's Eastercon, Philip Reeve; top of both the other two is The Wych Elm by Tana French. 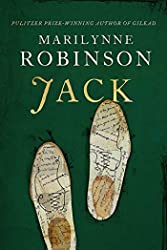