Second paragraph of third chapter (buckle up, it's a long one):

She had travelled but little before, except, long ago, from Avalon to Tintagel. She contrasted the frightened, despairing child of that first journey with herself today. Now she rode at Gorlois's side, and he went to some trouble to tell her something of the lands they passed through, and she laughed and teased him, and at night in their tent she went willingly to his bed. Now and again she missed Morgaine, wondering how the child would be faring - would she cry at night for her mother, would she eat at Morgause's bidding? But it was pleasant to be free again, riding in this great company of men, conscious of their admiring looks and their deference- none of them would dare to approach Gorlois's lady, except with an admiring glance. She was a girl again, but not, now, frightened and shrinking from the strange man who was her husband and whom she must somehow manage to please. She was a girl again without the childish awkwardness of her real girlhood, and she was enjoying it. She did not even mind the ceaseless rain that obscured the distant hills so that they rode within a little circle of mist.

One of those classic works of fantasy which I must have first read soon after it was published in 1983, and which is now tarnished by association with its author's personal history of child abuse.

The novel has some merits, but it has deeper flaws than may be initially apparent. It's great to take a traditionally male story - King Arthur, Lancelot, Galahad, etc etc - and tell it mainly from the point of view of the women in the story, in particular Morgaine who is very much the villain of the original legendarium - Arthur's half-sister, mother of their incestuously conceived son Mordred who eventually kills his own father. The book is a thousand pages long, but doesn't drag; we know what the ending is going to be, but the journey there is exciting and somewhat magical, with three different versions of Glastonbury coexisting in parallel strands of the same geography, two of them accessible only by the adept.

But. A lot of readers took to the portrayal of lovely paganism in contrast with rigid and blinkered Christianity, and sighed when at the end the Christians largely won. But the portrayal of Christianity is much darker than the reality of the time. The sexually repressive arm of recent Christianity has been transplanted by Bradley to the Dark Ages. Actual research on medieval Celtic Christianity shows that it was much more relaxed, including saints who actually performed abortions. The key baddie, the puritanical bigot bishop Patricius, is obviously meant to be St Patrick, who is supposedly buried at Glastonbury (though Downpatrick will disagree). But the real St Patrick seems to have been relatively relaxed about sex; he was much more upset about theft and murder. One of his two surviving works is a letter pleading for the freedom of enslaved kidnap victims. (You can read what you want into his autobiography's allusion to an otherwise unidentified sin committed when he was fifteen). Even in my teens, I felt that Bradley's portrayal of him was rather unfair.

On top of that, the paganism espoused by most of the key characters is actually rather repressive too. Arthur and Morgaine conceive Mordred in a drug-fuelled pagan ritual which they are given no choice about participating in. Avalon's women have no more choice about which men they are given to than Camelot's women do; the only difference is that the Lady of the Lake personally determines the fate of her subjects in Avalon, whereas patriarchal Camelot is more diffuse. (And, gulp, a mother figure deciding who the young people in her care will have sex with, some of them well below what we'd consider the age of consent today, is very creepy given what we now know about the writer.) Avalon also fetishises virginity more than the Christianity portrayed here. (See this really good analysis by Alexandra Lindstrom, from 2005, on these and other points.) I hope that those readers who developed an interest in paganism based on this book were alert to the negative nuances as well.

So, yes, interesting to return to it after many years, but its flaws have become more obvious with time. If you don't already have it, you can get it here.

This was the top book on my shelves by Librarything popularity which I had not already written up here. Next is The Eyre Affair, by Jasper Fforde. 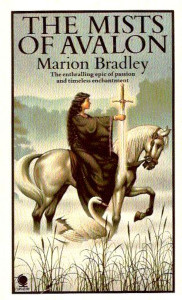