Second paragraph of third chapter:At the end of last year I read and largely enjoyed Bregman's Utopia for Realists. This has a grander sweep - the story of how humanity is much nicer and well-intentioned than people think. With some detail, he debunks the Stanford prison experiment, the Milgram electric shock experiment, and the Kitty Genovese case; and looks at the true story of the shipwrecked kids who failed to go Lord of the Flies and at various other statistics supporting his thesis. Fundamentally I want to agree with the book; I'd much rather that people are nice to each other. And mostly it's convincing; what is lacking is an answer to the Problem of Evil, though I guess that the point of the book is more the Invisible Prevalence of Good. You can get it here.

This was my top unread book acquired last year and also my top uread non-fiction book. Next on those lists respectively are Time Must Have a Stop, by Aldous Huxley, and Paul: A Biography by Tom Wright. 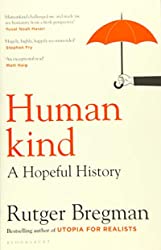