Today is Open Monument Day in Flanders, but it caught me a little by surprise and I was too late to book tickets for the one thing I really really wanted to see, the stucco ceilings of Jan Christian Hansche at Beaulieu Castle in Machelen near Brussels. Apart from that, my tastes run to the ancient rather than modern, and the most promising Roman-era event was a celebration of the Menapian tribe in the small town of Nieuwkerken-Waas, near Sint-Niklaas, on the far side of Antwerp from us.

Here the patch of land behind the town hall has been launched as a new civic park, and it turns out that the foundations of several buildings constructed by the Menapian tribe have been found on the site. The Menapii were basically the pre-Roman inhabitants of western Belgium, and they resisted Julius Caesar fiercely before being assimilated. (The Nervii were in central Belgium, and the Tungri in the east, collectively the Belgae.) It's relatively unusual to find non-Roman tribal structures from that era, and Nieuwkerken-Waas was making the most of it. Half the park has been set up as a Menapian fort; the flatter half was hosting archaeological experts, and the local scouts erecting a replica Menapian building. One chap was demonstrating Menapian pottery and milling: 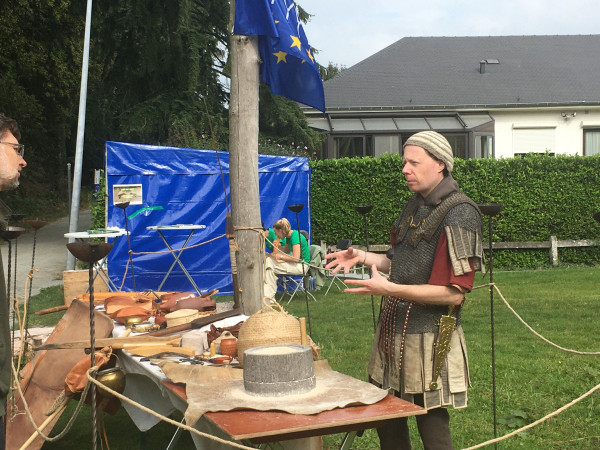 I was particularly fascinated by the mathematical / scientific demonstration, talking about the quadrivium and the Platonic solids, including the mysterious dodecahedra. Note in particular his phallic pendant. 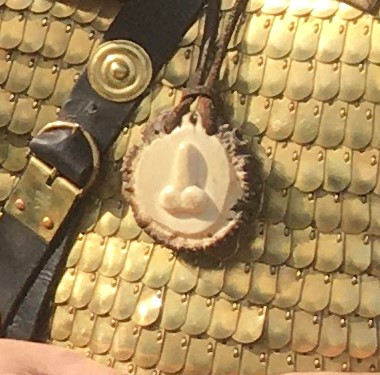 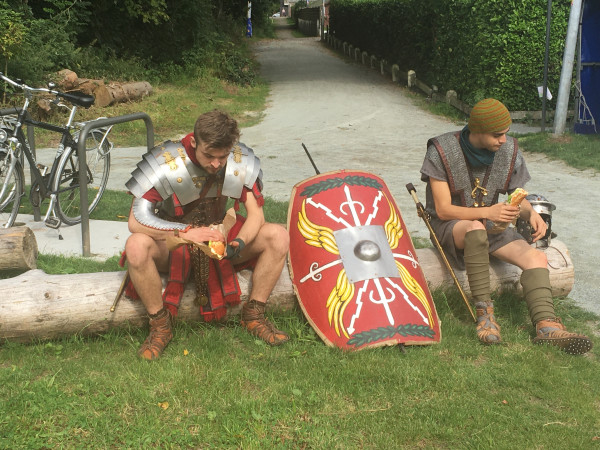 Having already driven an hour from home to Nieuwkerken-Waas, I realised it was about the same distance again to a particularly weird bit of Low Countries Roman heritage, the temple of Nehalannia at Colijnsplaat on the Zeeland island of North Beveland. I don't think I'll ever persuade anyone to go there with me, so this was obviously the day to go there.

Colijnsplaat is basically a normal enough Dutch coastal town with a lovely harbour.

Over on the right there, you may have missed the southern end of the Zeelandbrug, the longest bridge in the Netherlands at just over 5km.

I had yummy lunch at what Tripadvisor recommended as the top restaurant in Colijnsplaat (it's certainly top of my sample of one), the Bistro Zeelandia. And then it was off to the temple. I have to be honest, it's not on the same scale as the Parthenon in Nashville. Inside is a fairly small square space, though apparently the local Pagan community uses it for ceremonies. 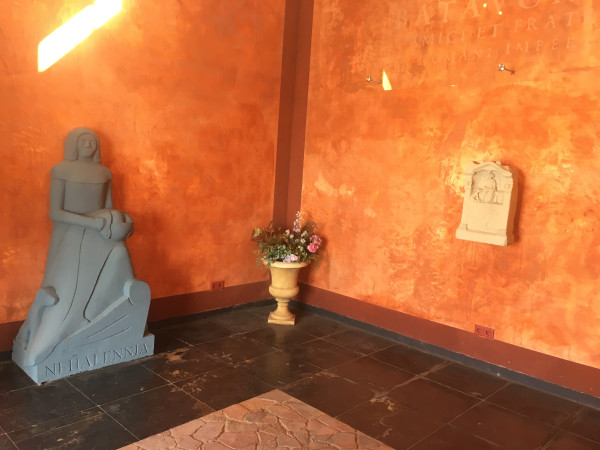 The goddess Nehalannia is mainly known from votive tablets cast overboard by sailors looking for safe passage. She is usually portrayed with a dog and a basket of apples. Nobody seems to know why. Beside the temple, a scaled down replica of a Roman era ship was installed last week. 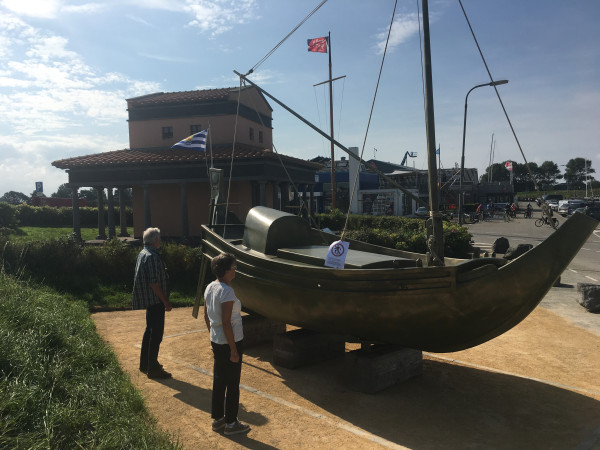 It's intriguing to think of the ancestors of the direct, Calvinist sailors of Zeeland paying their respects to the goddess, with her dog and her apples, by chucking votive tablets overboard on departure from the long-submerged port of Ganuenta. But in living memory, Colijnsplaat has been spared from an Act of God (or of the Gods). When most of Zeeland was devastated in the great flood of 1953 (in which 1,800 were killed in the Netherlands, 70,000 made homeless, and 9% of the country's agricultural land made unusable), here the villagers physically held back the water by pressing the wooden flood defences with their own bodies. I felt a common theme between the monument by Jan Haas at one end of the village, and the temple at the other. This was my first time in the Netherlands (apart from changing planes in Schiphol) since Dordrecht almost two years ago (part 1, part 2). I'll be back soon.
Collapse