A shake of the coif-covered head.

Set in mid-19th century Ireland, an English nurse is sent to investigate the mystery of a child who apparently survives without food, in the immediate aftermath of the Famine. It's pretty obvious to the attentive reader what is really going on from an early stage, but it's a well-told story and the ending was unexpected. (However, I really doubt that a 19th-century Englishwoman would be unaware of the Biblical story of manna!) You can get it here. 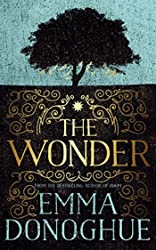