Second paragraph of third chapter (goes to four paragraphs in English translation):Back at Eastercon, I attended a panel on Chinese sf and fantasy, and this was one of several books strongly recommended. The author is described by Wikipedia as Hong Kong's greatest writer, and also one of the key renewers of the subgenre of wuxia, heroic martial arts fantasy set in what we would call the Middle Ages. A Hero Born is the first of four volumes comprising the translation of Jin Yong's most famous book, The Legend of the Condor Heroes, originally published in 1957.

It is a lot of fun. intersecting plot lines include children with a hidden heritage growing up, the Seven Freaks of Jiangnan (a group of virtuous martial artists each with his or her own skill) and Genghis Khan. Unlike a lot of Chinese literature that I have previously tried, I never got lost with the characters or the geography. I don't think I will persevere with the series, but this was a great start. You can get it here.

One always has to wonder what the linkage is between literature and politics here. Deng Xiaoping was a big fan, and the author (real name Louis Cha Leung-yung) was the first non-Communist who he met in Hong Kong. I think that the core message of the desirability of a united China dealing collectively with external and internal threats is pretty clear, but it's not shoved down your throat. (And most countries would want the same for themselves.)

This was my top unread book by a non-white writer. Next on that list is Dominion: An Anthology of Speculative Fiction from Africa and the African Diaspora, eds. Zelda Knight & Ekpeki Oghenechovwe Donald. 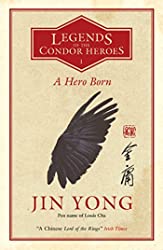