Current
Blood of Atlantis, by Simon Forward
Hurricane Fever, by Tobias S. Buckell
The Return of the Discontinued Man, by Mark Hodder

Next books
Felaheen, by Jon Courtenay Grimwood
The Bloodline Feud, by Charles Stross

Second paragraph of third chapter (Sunday 22 April 1945):A Woman in Berlin is the diary of an anonymous resident of Berlin during and after the final defeat of the Third Reich, from 20 April to 22 June. It's an intense, closely observed account of how an entire society and system of government collapses, and then the first steps to restoring it to a state of order, though under foreign occupation and with a new ideology being imposed on the disempowered inhabitants.

If that were all, it would still be a really valuable account of catastrophic endings and stumbling beginnings at a truly historical moment for Europe. But that is not all. From 27 April to 7 May, the writer, and pretty much every woman in Berlin who did not manage to hide, was raped repeatedly by Russian soldiers (strictly, Soviet soldiers; she mentions some from other parts of the USSR). I guess I've always known that this was an integral part of the collapse of the Eastern Front, but it's quite another matter to read a first person account. The details are calmly recounted, as the Russians arrive and take what they want, using German homes and bodies with no need for restraint and encountering little resistance (but no consent). It's a collective experience for the women of Berlin, and to an extent their few remaining men who are unable to intervene; but also an intensely personal and individual one for every woman affected. This grim situation is not unique to Germany in 1945, but it can rarely have been better described.

And yet those 11 days of constant rape are less than a fifth of the time period covered by the diary. On 8 May, VE Day, Berliners, women and men, wake up to the abrupt disappearance of the Russians and then the gradual restoration of civil authority after total catastrophe. The writer, aged 34 in 1945, later moved to Switzerland, and after the brutal reception of her diary when published in Germany in 1959, decided that it would not see light again in her lifetime. She died in 2001, and her identity is now pretty well established; it was republished in 2003 and a 2008 film is based on it.

A few years back I found a fascinating short film of scenes from Berlin in July 1945. The general absence of men is very notable. But every single woman we see must have been through the same experience.
This is a really gripping book, if a very tough read. You can get it here. 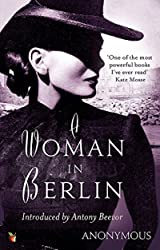