Third paragraph of The life and adventures of Mrs. Christian Davies, commonly call'd Mother Ross; who, in several campaigns under King William and the late Duke of Marlborough, in the quality of a foot-soldier and dragoon, gave many signal proofs of an unparallell'd courage and personal bravery, taken from her own mouth when a pensioner of Chelsea-Hospital, and known to be true by many who were engaged in those great scenes of action:

Nothing remarkable occurs to my Memory from the Time of this Monarch’s being proclaimed, to that in which he was forced to throw himself into the Arms of his Iriſh Subjects, having been driven from the Throne of England by King William. The Iriſh very readily eſpoused his Cauſe, and among others (from a Conſciouſneſs of its being a Duty incumbent on him to ſupport his lawful Sovereign, notwithſtanding his being of a different Religion, which he thought not Reaſon ſufficient to affect his Loyalty) my Father ſold all his ſtanding Corn, and other Things of Value, to Mr. Aſcham, a neighbouring Farmer, and was thus enabled, with what ready Money he had by him before, to raiſe a Troop of Horſe, and provide them with Accoutrements, and everything neceſsary to take the Field; and having furniſhed himſelf with a fine Horſe, and whatever elſe was requiſite, he ſet out at the Head of this Troop, which was called by his Name, Cavenaugh’s, to join the Reſt of the Army. I remember I was very fond of riding this Horſe, for a Reaſon which would have prevented any other of my Sex venturing upon him; I mean his Mettle; for he was ſo fiery, that not one of the Troop durſt mount him. You will, perhaps, wonder how I could; but I had ſo often fed him with Bread and Oats, that he would ſtand for me to take him up, when at Graſs, though he would have given twenty Men Work enough to catch him. When I had once hold of him, I would put on his Bridle and lead him into a Ditch and beſtride him bare-back’d. I have often mounted him when ſaddled, and took great Pleaſure to draw and ſnap the Pistols, and have not ſeldom made my Friends apprehend for my Life. I mention this, not as worth Notice, but only to ſhow my Inclinations, while a Girl, were always maſculine.

Second paragraph of third chapter of The Secret of Kit Cavenaugh, by Anne Holland:

The river was tidal at this point, and teemed with fish. James’s army of 23,000 guarded a fording point near Oldbridge. A little further south the river reached Rosnaree before turning north again to Slane, where, as part of the battle preparations the Jacobites had destroyed the bridge to prevent their enemy crossing it. But the possibility remained that James’s army could be outflanked if their opponents marched upstream and managed to ford the river somewhere else. If that happened, their only escape route would be by bridge over the Nanny, a tributary of the Boyne at Duleek.

I am hugely grateful to Wim Uyttebroeck, expert on the 1693 Battle of Landen aka Neerwinden, for flagging this up to me. Christian Cavenaugh, born in Dublin in 1667, ran an inn there and married her barman; but then he was unexpectedly conscripted into the Duke of Marlborough's army and disappeared from Ireland completely. Christian Welsh, as she now was, decided to go looking for him by dressing as a man and enlisting at the Golden Last (which incidentally has just been refurbished); it took her several years to track him down, and then several more years before an army doctor treating her after the Battle of Ramillies discovered that she had breasts (her secret had survived earlier treatment for a hip injury). In the meantime she had courted many women in male guise, while forbidding her husband to go near anyone else once she had found him.

Once the secret was out, she became a camp follower, ensuring logistics and provisions for her husband in particular and his comrades, and also unapologetically and frequently engaging in the looting of civilian property. Her long-lost first husband was eventually killed in action. She married twice more, ending her life as Christian Davies. When peace finally came she got a pension from Queen Anne and on 19 November 1717 was admitted to Chelsea Hospital as a Pensioner; she is recorded there as a "fatt, jolly-breasted woman [who] received several wounds in the Service in ye habitt of a man".

Her account really is an extraordinary document. Since the late nineteenth century, it has been attributed to Daniel Defoe, author of Robinson Crusoe; but this seems very unlikely as he died eight years before it was published. (And also I think he would have written it more smoothly.) It's a combination of detailed military history of the wars, which has been fairly thoroughly checked out for accuracy and consistency of dates, and Christian's own personal history, which seems a lot more vulnerable to inaccuracy - to give the most blatant example, we are told that between the Battle of Aughrim, where her father was supposedly killed, and the Battle of Landen/Neerwinden, where she herself received her hip injury, she ran the Dublin tavern, got married, had three children, wondered where her husband was for a year, and finally enlisted. But the two battles were only two years apart, so it seems improbable. However, it's clear from the rubric of the book that she was delivering it as oral history, without documentation, to an unnamed scribe, who then quite possibly finessed the military history research.

I really want this to be largely true. It fully caught my attention in the second sentence, where she states that her father's landlord soon after her birth in 1667 was an Arthur White of Leixlip. As it happens, an Arthur White of Leixlip, born in 1611, was the son of my 7x great-grandfather Sir Nicholas White and brother of my 6x great-grandfather Charles White/Whyte (therefore my 7x great-uncle, if you're counting). There is evidence to suggest that my Arthur White died before 1648; but he may well have had a son or a nephew of the same name, or Christian may be wrong about the dates. The coincidence seems a bit too good to ignore. (Especially since, as Cailtin White (no relation as far as I know) points out, a lot of her other Irish details are shaky.)

I was also struck by the local details regarding our part of Belgium. When she finally finds her husband in Breda, she is drinking a pint of "hougarde", ie the Hoegaarden blond beer which we still know and love today. After Ramillies, her secret is discovered while she is being treated for a skull wound at Meldert, which is the next village to Hoegaarden, very close to where B and U live. The bits about Flanders are very definitely written by someone who knew this part of the world. (The bits in Germany seem a bit vaguer - in particular the description of the Battle of Blenheim doesn't actually use the name "Blenheim" for it, which seems odd for the climactic battle of the earlier war.)

Particularly interesting for me is an account of an unsuccessful French raid on Leuven in 1710: 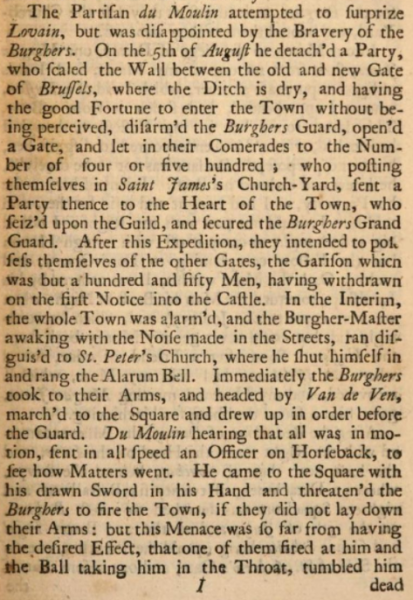 The Partiſan du Moulin attempted to ſurprize Lovain, but was diſappointed by the Bravery of the Burghers. On the 5th of Auguſt he detach'd a Party, who ſcaled the Wall between the old and new Gate of Bruſſels, where the Ditch is dry, and having the good Fortune to enter the Town without being perceived, diſarm'd the Burghers Guard, open'd a Gate, and let in their Comerades to the Number of four or five hundred; who poſting themſelves in Saint James's Church-Yard, ſent a Party thence to the Heart of the Town, who ſeiz'd upon the Guild, and ſecured the Burghers Grand Guard. After this Expedition, they intended to poſſeſs themfelves of the other Gates, the Gariſon which was but a hundred and fifty Men, having withdrawn on the firſt Notice into the Cattle. In the Interim, the whole Town was alarm'd, and the Burgher-Maſter awaking with the Noiſe made in the Streets, ran diſguis'd to St. Peter's Church, where he ſhut himſelf in and rang the Alarum Bell. Immediately the Burghers took to their Arms, and headed by Van de Ven, march'd to the Square and drew up in order before the Guard. Du Moulin hearing that all was in motion, ſent in all ſpeed an Officer on Horſeback, to ſee how Matters went. He came to the Square with his drawn Sword in his Hand and threaten'd the Burghers to fire the Town, if they did not lay down their Arms: but this Menace was ſo far from having the deſired Effect, that one of them fired at him and the Ball taking him in the Throat, tumbled him dead from his Horſe. The Burger-Maſter, immediately order'd the Inhabitants to repair from their different Quarters to the Gate the Enemy had open'd and retake it; while he at the Head of his Company march'd with beat of Drum to St. James's Church-Yard to diſlodge the French: But they fearing they ſhould be cut off from the Gate, thought of nothing but their Retreat, and it was time for them to do it, for the Burghers arrived juſt as they left the Church-Yard, and hooted them as they went off.

This is a reasonably well documented event (the Emperor presented the city with a golden key as a reward), but I'm struck by the detail provided. The Sint-Jakobskerk is indeed just off the Brusselsestraat, and just inside the old city wall; the churchyard, immediately to the south, is now the rather soulless Sint-Jakobsplein open air car park. It's bizarre to think of this as the site of a pitched battle 311 years ago last week. (Though that's equally true of many other parts of Belgium.)

I've used she / her pronouns here, because that's clearly what Christian used, but she's equally clearly an early well-documented case of genderqueerness. I bet that she gave a lot of physical joy to the Dutch and Belgian women she courted, though they may have been puzzled that she did not go as far as most male soldiers would have done. (Of course, some of them may have known perfectly well, and been happy enough!) By her own account, supported by the existence of the Chelsea record, she was as effective (and brutal) as any other soldier in the army, and thrived living as a man.

And she was not alone - one of her early anecdotes is that a French officer who died in her parents' house in Ireland turned out to be a woman when she was laid out for burial. An appendix to the original 1740 book alleges that the dead French soldier had a device for easy urination standing up, which Christian then appropriated and used during her own military career. This seems perhaps a little too good to be true; but then so does the entire story.

You can access the original copy of the Life and Adventures here or here, or also get it from Amazon here. Terry Pratchett must surely have known about this when he wrote Monstrous Regiment; in fact I would not be surprised if there is some direct borrowing (which was his usual MO), but I have not checked.

A few years ago, Anne Holland produced a version of the Life and Adventures which somewhat uneasily straddles the genres of novelisation, historical research and simply reprinting chunks of the original. It doesn't add a lot, to be honest, but it may be more readable for people less used to eighteenth-century style. You can get The Secret of Kit Cavenaugh: A Remarkable Irishwoman and Soldier here. 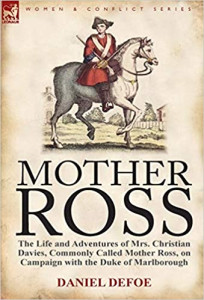 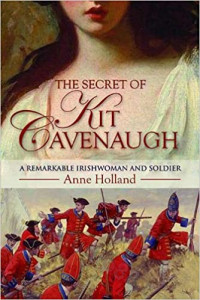