The dull stinging sensation of a numb arm woke Tom Niven. He glanced at his watch. It was still stupid o’clock. What the hell was going on? His head was still fuzzy from last night’s trip to the Students’ Union. Cheap booze, Ronnie’s jazz fags and Freshers… ah. That explained the dead arm. And the blonde head on the pillow beside him. She was lying across his arm. Christ, what was her name again? Anne? Andrea? Anna! Bingo. That’s was it. Anna! Anna Whitaker. It was all coming back to him. Anna Whitaker, a Fresher with an interest in medieval history. He had done the course on the Crusades a few years earlier. He’d given her a bit of chat about the course, what books to go for, what the tutors would look for… a few drinks, some all-American charm and then back to the flat. None of his flatmates were back for term yet so they’d had the place to themselves.

I've been taking a bit of a sabbatical from Doctor Who books over the last year or so, but I've decided to jump back in, taking three strands of reading: the stories of Erimem, an audio companion for Peter Davison's Doctor; the Candy Jar novels of the Brigadier; and also the most recent BBC publications (which have slowed to rather a trickle at the moment). I'm going to resume the Brigadier books from where I left off, but I'm taking the Erimem series from the beginning, even though I had already read this one in 2015. Back then I wrote:

Here she is brought back to adventure by her creators, Iain McLaughlin and Claire Bartlett (with a foreword by Caroline Morris who played her on audio and has now given up acting for other behind the scenes media work). It's a decent enough story; Erimem appears in a 21st century university museum, with convenient amnesia of her adventures since leaving Egypt, and gets swept up into faculty politics with demonic forces and the Battle of Actium. I was entertained and I will get the next in the series.

(Well, it took me six years but I did eventually get the next in the series.) On rereading, I still enjoyed it; Erimem's convenient amnesia means that you don't need to know anything about her Doctor Who background to appreciate the book, though you may wonder how a young woman could both be a Pharaoh and also have awesome combat skillz. The seedy campus scenes of the 21st century are written with conviction, and the Egypt / Actium scenes with enough spirit to avoid the impression of historic bludgeoning. Also a couple of the incidental characters get killed off, having been given decent characterisation first, which doesn't always happen in books like this. Not Great Literature, but entertaining. You can get it here. 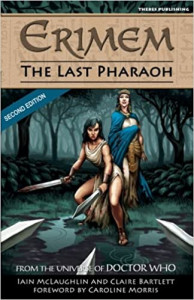