Second paragraph of third section:A grim grim read by Belarus's Nobel prize-winning writer - the only Nobel laureate for literature whose output is primarily non-fictional since, errr, Winston Churchill in 1953. This is generally rated her best book; it's a gruelling set of first-person accounts from Soviet soldiers and other personnel involved with the 1979-89 war in Afghanistan. The personally brutalising effects of war on the combatants are not especially new; what Alexievich manages to do is to eloquently convey the trauma and confusion, especially of those who realised pretty early on that they were fighting for a lie. The frank accounts of the Russian and Belarussian women who signed up as nurses or admin staff, and were then sexually exploited by the system, is another aspect that is surely also true of more recent conflicts but little discussed. An appendix recounts the dispiriting story of attempts to censor or punish the author for having the audacity to publish a book that challenged the Army. It's tremendous stuff, appllicable to many wars. I'm very glad that you can get it here.

This was my top unread book by a woman. Various Hugo packet books are next in line, so I'm not going to record progress on that list until I have exhausted my voting materials. 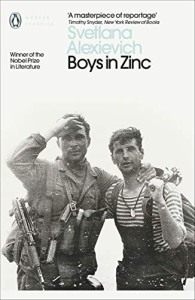