None. This is the first date in the year on which no episode of Doctor Who or its various spin-offs has been premiered.

After seventy-eight minutes of holding, the daily Pan-Pac Boeing from San Diego was signalled down on to Emergency Runway A. Careful not to infringe Chinese air space, it circled down across sea and land. The delay had been caused by a plane on a local flight, which had crashed and blocked a main runway. The passengers could see the dark smudge of smoke drawn across the field, impersonal, remote from human lives and deaths.

Aldiss is one of my favourite writers, but I don’t think this is one of my favourite collections. The best stories here I already knew from other anthologies; the others, including the title story, have mostly not been published elsewhere since they were published here, and generally for good reason. It’s still interesting to appreciate just how much the retreat from Empire affected Britain of Aldiss’s generation, and even the stories that have not stood the test of time have some great turns of phrase in Aldiss’s typically laconic descriptions. So I’m glad I finally got to it, though I suspect I may not pick it up again. You can get it here.

This was my top unread book acquired in 2015. Next on that pile is The Primal Urge, by the same author. 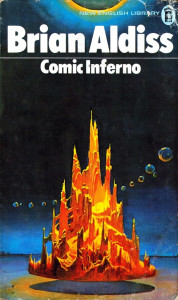