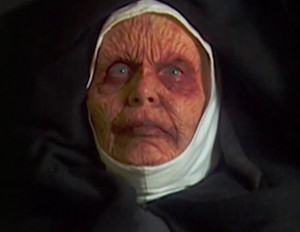 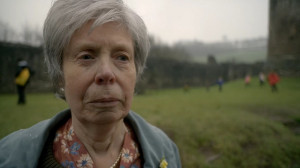 13 June 1964: broadcast of "The Day of Darkness", fourth episode of the story we now call The Aztecs. Cameca helps the Tardis crew escape, and Aztec history continues as it had always done. 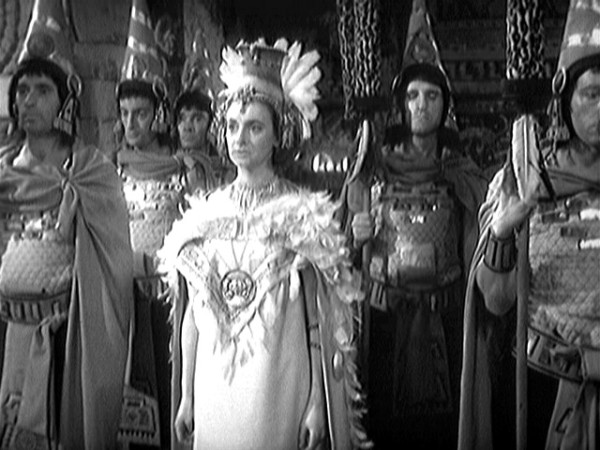 13 June 1970: broadcast of sixth episode of Inferno. The Doctor and friends fight through to the Tardis console in the parallel Earth, and the Doctor escapes though the others are doomed. 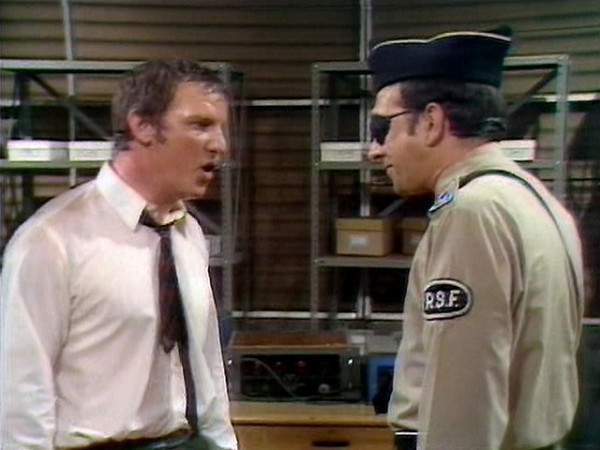 I discovered by chance during the week that there are two very ancient churches in villages near us. I find this fascinating. Although one thinks of Ireland as a place with a lot of ancient history, in fact there are not a lot of ancient buildings which are still in use. In the town of my birth, Belfast, the title of Oldest Building is disputed between McHugh's Bar, behind the Albert Clock, and the Dirty Onion two blocks away on Hill Street. Neither is older than the late 17th century; the oldest buildings in New York are older than that.

Our own local church, dedicated to St Anne, is not a bad start - the tower is 11th century, but the rest is from the 18th century. However, St Peter's Church in Bertem, a place I drive past whenever I go to Brussels, is almost entirely 11th century, and early 11th century at that. We went and had a look at it this afternoon - it is open from 2 to 5 on Sundays. I had not realised that today was the day that churches in Belgium generally reopened after the second wave of the pandemic, and there was a lovely baptism taking place as we arrived. Father Maervoet made us very welcome. For a thousand years, the people of Bertem have been bringing their children to this building to be welcomed into the community.

An ancient icon of the Madonna as the Seat of Wisdom sits in a protected alcove. It is thought to be twelfth century, so not quite as old as the church. (What a disappointment, eh?) Little Karel looked about nine or ten months old; he must have been born just before the October lockdown. (Or maybe even after. He was sitting up straight and crawling, but not yet standing.) It was really nice to see an old community building on the day that it returned to regular use. The Bertem church is a little spoiled by a decaying 18th century portico at one corner. Who on earth could have thought that was a good idea? But that is not all. Not ten minutes' walk from St Peter's in Bertem, the smaller chapel of St Verona in Leefdaal dates in part from around 900, a century earlier than St Peter's. It is open at 8.30 on a Sunday morning, or by appointment for a small fee. (We made an appointment with Mrs R who is the head of the parish council.) The core of the chapel is the really old part. A couple of lucky tourists happened by and were able to benefit from the chapel being opened at our request. St Verona is the stuff of legend. She is commemorated in an 18th century statue and a 20th century stained glass window. Supposedly, she was the sister of a Holy Roman Emperor, who received a prophetic dream that she would be buried here. Other details are vague. 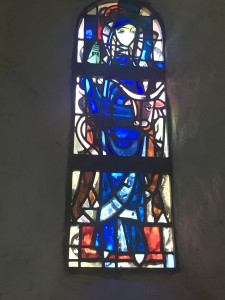 Unsporting philologists suggest that there was no St Verona, and the name of the hill ("Vroienberg") became the name of the chapel. be that as it may, Mrs R is justly proud of Leefdaal's little corner of local heritage, and gave us a good tour. Behind Mrs R you can see two other features of local worship, which we found both in Leefdaal and in Bertem. One is a portrait of local boy Father Damien, who died in 1889 ministering to lepers in Hawaii and whose mortal remains are now in Leuven. St Peter's, Bertem has a less chummy and slightly stern painting of him too. The other is that both churches have statues of the Virgin and her Child, kept in glass cases for now, but ready for the moment when they can again be brought out for a procession through the town. (Bertem on the left, Leefdaal on the right.) 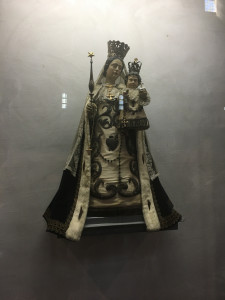 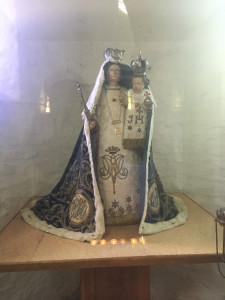 Finally, near the chapel of St Verona in Leefdaal you can find the spring of St Verona (in the front garden of 283 Dorpstraat). Externally it's a not very impressive 1950s cubicle, but there is an interesting bas-relief inside depicting St Verona (in the middle) who apparently caused the spring to well up from the ground, offering comfort to two passing German pilgrims. 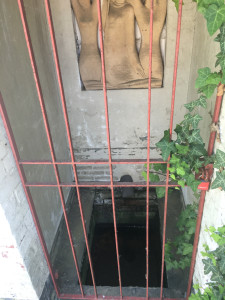 Belgium has only been independent since 1830, but local roots are a lot deeper than that.
Collapse